NUR-SULTAN – In less than two years, the National Council of Public Trust (NCPT) under the President of  Kazakhstan has become not only an integral part of the life of Kazakh society, but also an effective institute for facilitating a constant dialogue between society and the government. 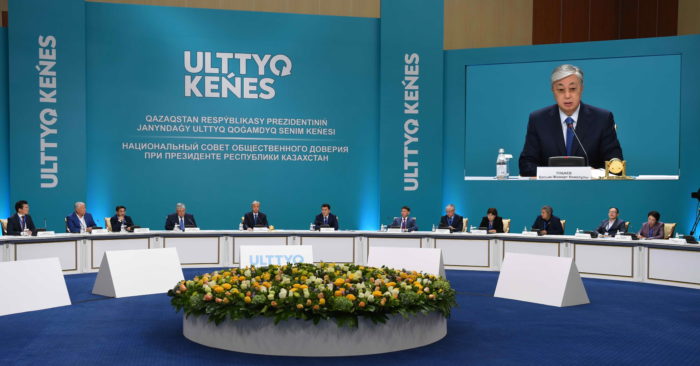 During the first meeting of the National Council of Public Trust in 2019, President Tokayev said that reforms are needed to improve life and government in Kazakhstan but that those reforms should be adopted gradually and only after thorough discussion. Photo credit: Akorda Press.

According to international analysts and observers, the council has influenced many different aspects of reforms in the country.

“The concept of different opinions, but one nation”

Kazakh President Kassym-Jomart Tokayev announced plans to create the Council of Public Trust in his inaugural speech on June 12, 2019.

The main goal of the council is to develop proposals and recommendations based on a discussion with representatives of the public, political parties, and civil society. 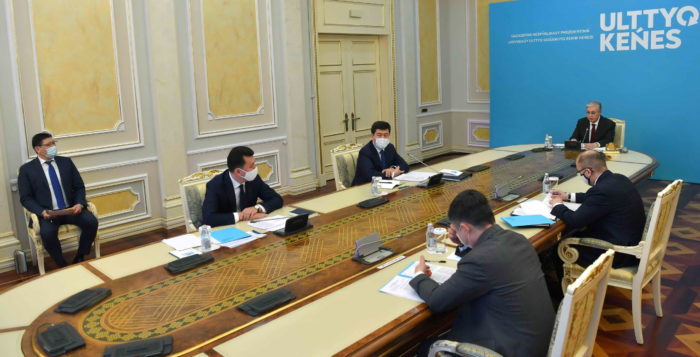 The fifth meeting of the National Council of Public Trust that took place virtually on Feb. 25, 2021 focused on five blocks of specific measures and initiatives in political and economic spheres worked out in cooperation with the council.

“Our citizens are deeply concerned about the development of dialogue between the government and the society. This dialogue should be based on the recognition of pluralism of opinion. Different views, but one united nation – this is the main guideline. That is why I have decided to establish the National Council of Public Trust.This Council shall embrace all the representatives of society, including the youth… The authorities are obliged to fulfill their promises which they made to the people. It is our primary mission. It is the only way to strengthen the unity of the nation and maintain stability in the country,” said Tokayev during his inauguration ceremony.

The first composition of the council consisted of 47 people, including the President, two representatives of his administration, ombudsmen for human rights and child’s rights, protection of rights of entrepreneurs, 41 representatives of political parties, media, and experts.

Based on the results of its activities, in August-November 2019, 67 proposals on the political, socio-cultural, and economic modernization of the country were submitted to the presidential administration.

Summing up the results of the first council’s work on the eve of 2020, Tokayev noted: “This work will give a powerful impetus to strengthening democracy and increasing public confidence in authorities. Our experience is highly appreciated by international organizations. In general, it was recognized as an example of a responsible and constructive dialogue. We are building a new political culture through constructive dialogue.”

The fourth meeting of the council took place online in October of 2020.

The head of state announcned plans to reform the public administration system, focus on social and environmental problems, improve the mechanisms for involving women and youth in the Kazakh Parliament and local representative bodies, protect the rights of children, and combat human trafficking.

In addition, specific proposals were voiced by the council’s working groups on issues of political, economic, social, spiritual, and cultural modernization of the country.

“Citizens should see and feel the concrete results of state policy not in some distant future, but in the near future. It should be understood that international ratings, for all their importance, no longer impress citizens and have no effect on their social well-being,” the President emphasized.

Finally, the fifth meeting of the NCPT held at the end of February 2021, was also marked by important initiatives.

Tokayev said that the year of the 30th anniversary of Kazakhstan’s Independence will be marked by economic and political reforms, development of education and healthcare, digitalization, protection of human rights, and solutions to environmental problems.

For qualified protection of human rights, the President proposed to introduce advanced international standards based on 14 global indicators developed by the Office of the United Nations High Commissioner for Human Rights, to begin a phased implementation of national indicators for assessing the observance of human rights.

He instructed the Ministry of Internal Affairs to restore the special units for the protection of women and children from violence, as well as to introduce a special empowered female investigator division to deal with violent crimes against women and children.

Other innovations included the development of an Action Plan to ensure safe work until 2025, the introduction of administrative responsibility for legal entities for the involvement of minors gambling, the adoption of measures that increase the competitiveness of trials, ensuring equal status for prosecutors and public defendants.

The implemented reforms have shown that the dialogue between the authorities and society is vital.

This is also evidenced by the laws recently adopted in Kazakhstan on political parties, peaceful rallies, as well as amendments to laws about the institution of parliamentary opposition and new regulations for its activities. Part of these reforms is the accession in September 2020 to the Second Optional Protocol to the International Covenant on Civil and Political Rights and the abolition of the death penalty in the country.

In total, since its creation, the President has held 24 meetings with members of the council. A package of political reforms announced with the support of leaders of public opinion in Kazakhstan has been fully implemented, and seven laws have been adopted.

Following the results of the parliamentary elections held on Jan. 10, 2021, nine members of the council became deputies of the Majilis (a lower house) of the Kazakh Parliament.

The activities of the council prove that the multilateral dialogue initiated by Tokayev is an instrument for not only political modernization and building truly democratic institutions, but also for implementing progressive social and economic reforms which comply with new, emerging global standards.