NUR-SULTAN – Kazakhstan and Kyrgyzstan have made a significant step forward in their bilateral cooperation following the March visit of Kyrgyz President Sadyr Japarov to Kazakhstan. As part of the ninth meeting of the intergovernmental council, Prime Minister of Kazakhstan Askar Mamin and Prime Minister of Kyrgyzstan Ulukbek Maripov attended the opening ceremony of a modernized Kordai – Ak Zhol border checkpoint, a major border crossing point between the two countries, reported the Kazakh Prime Minister’s press service.

Border checkpoint entrance from the side of Kazakhstan. Photo credit: gov.kg. Click to see the map in full size.

The upgraded infrastructure at the border checkpoint, which closed for reconstruction works in February of 2020, is expected to boost the capacity to 2,500 cars and up to 25,000 people per day from the previous 1,000 and 6,000, respectively.

The number of passport control cabins was increased from 13 to 34 and the number of lanes from two to eight.

The decision to renovate the border checkpoint was made following the visit of Kazakh President Kassym-Jomart Tokayev to Kyrgyzstan in November 2019. Kazakhstan launched the work in January 2020. 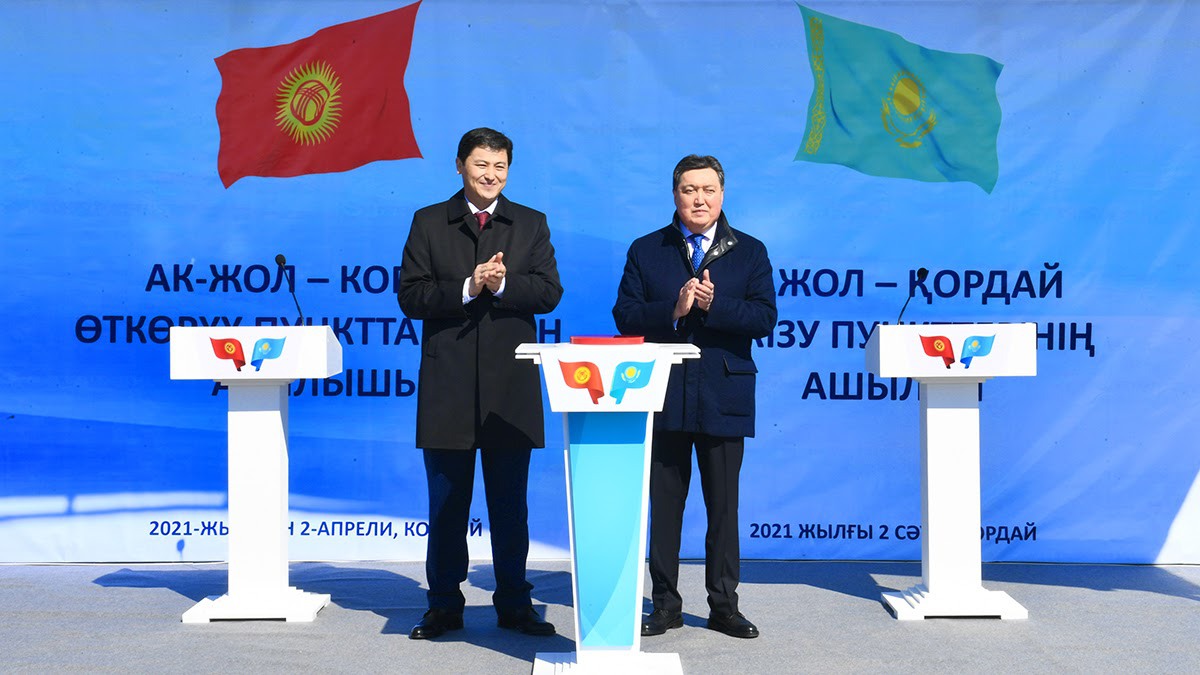 The work was scheduled to finish by the end of 2020 but was delayed due to coronavirus restrictions.

During the meeting, Mamin and Maripov explored a wide range of cooperation areas, including trade and economy, investment, agriculture, water and energy, social protection and labour migration.

They also discussed the prospects for the establishment of a joint Alatau Cross-Border Trade Centre at the Karasu – Ak Tilek border crossing point that will house modern warehouses for horticultural products, certification, sanitary and phytosanitary control bodies as well as the construction of wholesale and distribution centres in the Chui and Issyk-Kul regions of Kyrgyzstan with a total investment of $25 million and a capacity of 26,000 tonnes per year. While the checkpoint was closed for construction works, only passengers crossing the border on foot were allowed and transport had to go through the other checkpoints. Photo credit: gov.kg