By Staff Report in Business, Kazakhstan Region Profiles: A Deep Dive Into the Heart of Central Asia on 29 March 2021

NUR-SULTAN – Kazakh Prime Minister Askar Mamin took part March 26 in the opening of the KIA car model production line at the SaryarkaAvtoProm plant as part of his working visit to the Kostanai region, PrimeMinister.kz. reported.

Prime Minister Askar Mamin and president of KIA Motors Russia and CIS Jin-Ha Kim took part in the opening ceremony of the KIA production line at the SaryarkaAvtoProm plant on March 26. Click on the picture to see the map.

It is planned to start production of 20,000 KIA car models per year. The localization will reach up to 50 percent with the use of small-unit manufacturing technologies, including the welding and painting of bodies.

“The car industry is one of the strategically important directions for ndustrial development of Kazakhstan, and it shows positive dynamics every year,” Mamin said. 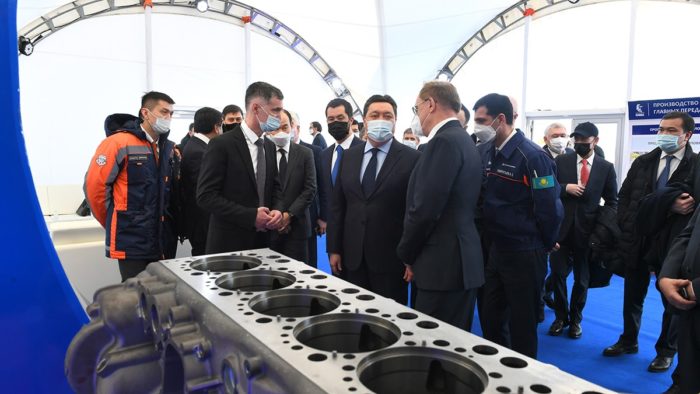 The prime minister got acquainted with the construction of the KamLitKZ iron casting plant. Photo credit: Primeminister.kz.

President of KIA Motors Russia and CIS Jin-Ha Kim, who also took part in the ceremony, noted that the CIS market plays a significant role for the company and Kazakhstan is one of the most priority regions for further growth.

Mamin also visited the construction site of the KamLitKZ iron casting plant. The plant will produce axle housings, cylinder blocks and engine cylinder heads for K5 trucks with a total volume of more than 40,000 tons of cast iron per year. This allows Kazakhstan to become one of the global suppliers of KAMAZ PTC heavy-duty trucks with 95 percent of export production.

The first stage of construction is planned to be completed in October 2021, the second and third stages in 2023. The project worth 80 billion tenge (US$188 million) will create 300 jobs.

The prime minister also visited the AgromashHolding plant, which is designed to increase the local content in agricultural machinery. The plant has automated lines for laser cutting, bending, painting and welding of metal, the production of plastic products, interior parts, thermal noise insulation, conveyor assembly and other services.

The plant will produce more than 1,200 components for agricultural machinery, and for the Kirovets, Essil, Lovol, Pottinger, Deutz-Fahr, JAC, Chevrolet and other brands in the near future.

Mamin also discussed the prospects of cooperation in the car industry with the heads of KAMAZ, Tatneft, AvtoVAZ and KIA Motors companies. As a result, nine agreements on the implementation of joint projects were signed.

Earlier, it was reported that the Kazakh car industry observed an increase of exports in 2020 despite the pandemic and restrictions. Kostanai-based SaryarkaAvtoProm is one of the major export manufacturers in the country.