By Zhanna Shayakhmetova in Society on 15 March 2021

NUR-SULTAN – The British Council announced the recipients of the Study UK Alumni Awards 2021 in Kazakhstan at the March 12 virtual awarding ceremony in Nur-Sultan.

This year, Kazakhstan is one of the first countries to host the awards and will be followed by awarding ceremonies in eight countries, including India, Azerbaijan, and Qatar.

Graduate of University of Edinburgh Saltanat Janenova received the Professional Achievement Award, which recognizes alumni who have distinguished themselves through exemplary leadership in their professional field. As an assistant professor at the Graduate School of Public Policy at Nazarbayev University, she has been teaching courses for the Master of Public Administration, Master of Public Policy, and PhD in Public Policy programs. She also studies public sector reforms in Central Asia and advises government bodies and international organizations. 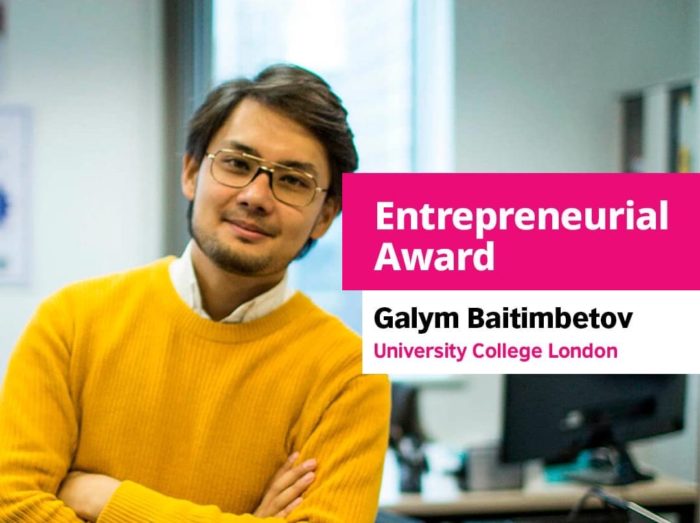 Graduate of Queen Mary University of London Akmaral Sman received the Social Impact Award, which acknowledges alumni who have made an exceptional contribution to creating positive social change. Sman is a regional gender and livelihood expert at the Food and Agriculture Organization of the United Nations. She is engaged in capacity building for stakeholders, NGOs, academia and Central Asian researchers through project activities. She builds partnerships and initiatives to empower rural women and vulnerable populations, and analyzes national policies, programs and key recommendations to promote gender equality and improve living conditions.

Galym Baitimbetov, the graduate of the University College of London, received the British Council Alumni Entrepreneurial Award, which highlights alumni who have played a leading role in innovation or creative solutions. Baitimbetov is the founder and CEO of the AquaPoint company that offers solutions for clean water without bottles and delivery. His company has a mission to make drinking water more accessible in public places.

Overall, six UK alumni from Kazakhstan were recognised for their outstanding achievements and for their contribution to strengthening relations between the two countries.

British Ambassador to Kazakhstan Michael Gifford said that Kazakhstan has been a priority country for British education for many years. In the last three years they have issued more study visas for Kazakh students than for Australia and Brazil combined, and that 1,700 Kazakh students are studying at various levels in the UK at any one time.

Janenova, who is an Assistant Professor at the Graduate School of Public Policy, Nazarbayev University, said that it was one of her best decisions to pursue the Master’s and PhD degrees in the UK with the support of Kazakhstan’s Bolashak International Scholarship program.

“The study has changed my career trajectory 360 degrees from a government official to an active researcher and teacher. Currently, I’m teaching at the Graduate School of Public Policy at Nazarbayev University, which is the international and flagship university of Kazakhstan. I’m proud to share my experience with international and Kazakh students,” Janenova said.

The Study UK Alumni Award celebrates higher education in the UK and the achievements of UK alumni globally. This year, the award received more than 1,300 applications from international UK alumni in more than 114 countries.