By Zhanna Shayakhmetova in Society, Sports on 18 March 2021

NUR-SULTAN – The players and coaching team completed the task before them and worked well together despite the difficult start of the 2020-2021 season, said President of Nur-Sultan Hockey Club Barys Boris Ivanishchev at the March 16 press briefing. 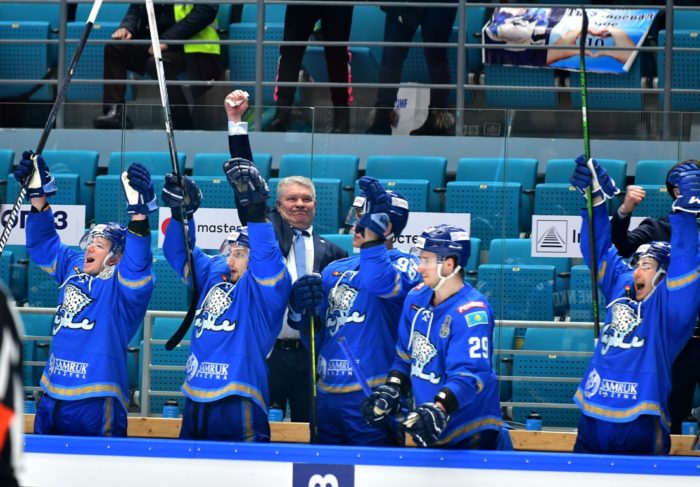 Barys ended its playoff in the first round of the Gagarin Cup playoffs of the Continental Hockey League (KHL) with a loss to HC Metallurg Magnitogorsk. Photo credit: Press service of HC Barys.

Barys ended its playoff in the first round of the Gagarin Cup playoffs of the Continental Hockey League (KHL) with a loss to HC Metallurg Magnitogorsk, a two-time Gagarin Cup winner.

Barys finished sixth in the regular season of the KHL’s Eastern Conference and won 31 matches out of 60. Only three playoff matches were held with the participation of spectators with an occupancy rate of no more than 30 percent in this season.

“This year we started the season very late. The players were unable to arrive at the training camp at the same time due to the pandemic. The training camp didn’t work according to the schedule and the team did not take part in any pre-season tournaments. The season started on time, but after several matches we had to take a break due to the illness of the players,” said Ivanishchev.

The club’s management is already negotiating with agents as many players have contracts until April 30. 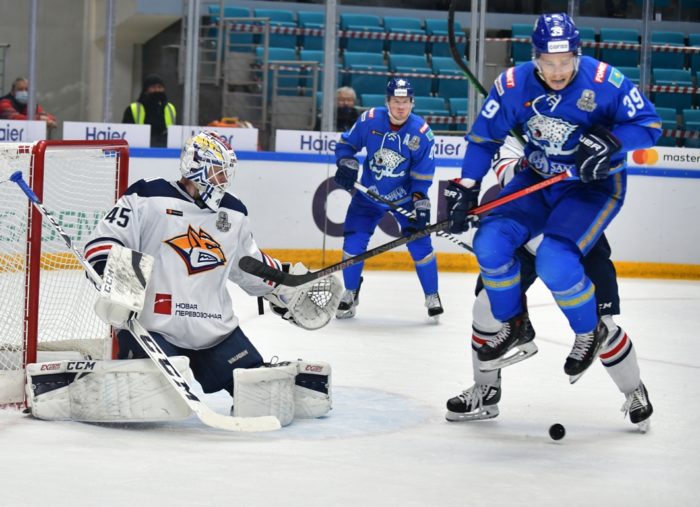 This year was also an unusual season for an army of hockey supporters because all the sports and mass events were played without spectators.

“Everything will depend on the players’ requests. There is a list of whom we would like to keep on the team, including Kazakh players. Information about all changes will be available on our official website,” he added.

Head coach of HC Barys Yuri Mikhailis, who had his debut season in KHL, noted the progress of Kazakh players Kirill Panyukov and Samat Daniyar.

“Kirill (Panyukov) did his best after he was placed in the team’s top line ups.  It was honorable and exciting for him. He was ready for this, and showed a good result. Samat Daniyar also debuted very well. He was not physically ready in the playoffs, when we played against Metallurg. Maxim Musorov needs more playing experience in the KHL. I hope he will play with us next season,” said Mikhailis.

This year was also an unusual season for an army of hockey supporters because all the sports and mass events were played without spectators nationwide.

Only three playoff matches were held with the participation of spectators with an occupancy rate of no more than 30 percent in this season.

“The games with the support of fans are exciting,” said Barys forward Jakob Lilja after the first playoff match. “I haven’t experienced them in a long time. When you get the puck, the whole arena starts screaming, and this is a completely different feeling. Of course, the fans helped us today.”

Swedish player Lilja, who spent his first season in the KHL, became the best sniper on the Barys team with 20 goals and doubles in two matches.

Canadian defenseman Darren Dietz became the top scorer of Barys in the regular season with 37 (17 + 20) points. He also became the best in the list of KHL defenders-snipers.

Nikita Mikhailis was recognized as the team leader by number of goals in the powerplay. He updated his personal performance record in the regular KHL championships.

Established in 1999, HC Barys is one of the major sports clubs in Kazakhstan. Barys won silver medals at the end of its first season of the Championship of Kazakhstan in the 1999/2000 season.

In 2008/2009, Barys joined the KHL, the most prestigious and high-quality hockey league on the Eurasian continent. In his debut season in the KHL, Barys reached the playoffs, joining the list of 16 best clubs among 24 teams.

In 2019, Barys celebrated its 20-year anniversary and honored its greatest players. The jerseys worn by Nikolai Antropov, Brandon Bochenski, Kevin Dallman, Alexander Koreshkov, Fyodor Polischuk, Vitali Yeremeyev and Talgat Zhailauov were raised to the rafters for the first time ahead of the game.