NUR-SULTAN – A chronicle of the activities of the Kazakh President Kassym-Jomart Tokayev over the last year has been released, reported the Akorda Press service. 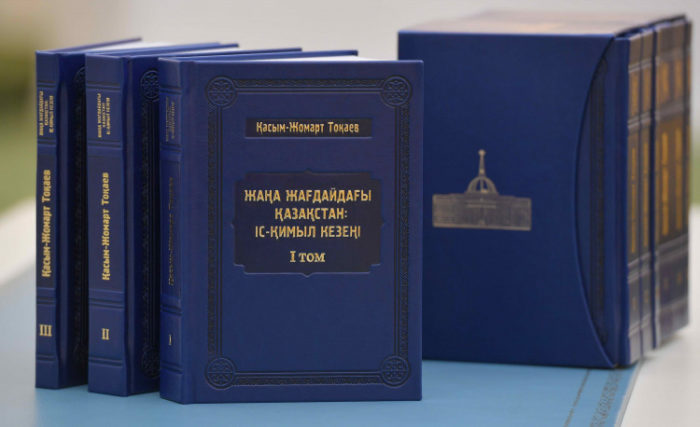 The cover of the books. Photo credit: AkordaPress.

“The year 2020 will be remembered by the global fight against COVID-19, which affected the socio-economic development not only of Kazakhstan, but of the whole world. Our country was one of the first to respond to the serious consequences and took necessary measures in time,” reads the release.

The collection consists of three books featuring the speeches of the head of state during his working trips to the regions, at events, addresses and statements, interviews with domestic and foreign media, articles published in various media outlets.

The first and second books dedicated to the events held during the fight with the COVID-19 pandemic. It includes keynote speeches, which outlined tasks aimed at improving the well-being of people and speeches at international events.

The third book includes articles and interviews published in the media. The articles reflect the position of Kazakhstan in relation to the international situation, reflections on internal political issues.

The collection also includes photographs of events with the participation of the head of state.

Healthcare issues, stability and rates of economic development, and education were an agenda priority after President Tokayev declared the state of emergency on March 16, 2020.

As a result, more than 4.5 million people received financial benefits during the state of emergency.

Tokayev paid regular visits to the Zhambyl, Akmola, Turkestan, Kostanai, North Kazakhstan, Almaty, East Kazakhstan and Karaganda regions during the pandemic. The head of state gave instructions on attracting investments in agriculture and industry while gathering information about the socio-economic development of the regions.

The President continued his participation in international events through the online format. During this period, President Tokayev took part in the high-level meeting to commemorate the 75th Anniversary of the United Nations (UN), the General Debates of the UN General Assembly (UNGA), meeting of the Council of CIS Heads of State, meeting of the Council of Heads of State of Member States of the Shanghai Cooperation Organization (SCO), summits of the Cooperation Council of Turkic-speaking states, Eurasian Economic Union, the Collective Security Treaty Organization and other meetings.

In his remarks, the President reaffirmed Kazakhstan’s commitment to strengthening international security, and developing global and regional ties.

The authors of the book believe that the materials will become valuable and useful documents for scholars and  officials.