By Akmaral Arystanbekova in Kazakhstan’s Independence: 30 Years, Op-Ed on 13 March 2021

In March 1991, the official visit of the President of Turkey Turgut Özal took place at the invitation of Kazakhstan’s then-President Nursultan Nazarbayev. This became the first visit of the head of a foreign state in the history of a sovereign Kazakhstan and laid the foundation for the country’s comprehensive cooperation with Turkey. 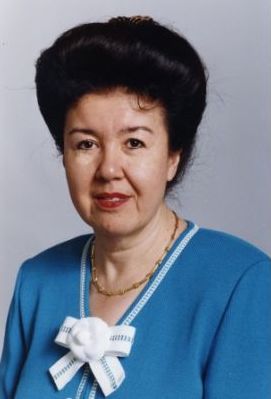 The visit was preceded by extensive preparation entrusted to the Ministry of Foreign Affairs of the Kazakh SSR, which I headed at the time. Before that, I had the opportunity to meet with Volkan Vural, the Turkish Ambassador to the USSR, who visited Almaty in April 1990 to establish the earliest official contacts with Kazakhstan.

In December 1990, our country was visited by the Minister of Culture of Turkey Namik Kemal Zeybek, who signed the Protocol of Intent between the Government of the Kazakh SSR and the Government of the Turkish Republic and the Agreement on cultural cooperation between the State Committee of the Kazakh SSR for Culture and the Ministry of Culture of Turkey. An agreement was reached on holding on an annual and reciprocal basis days of culture and art in Kazakhstan and Turkey, on the opening of cultural centers of the two countries in Almaty and Ankara, on cooperation in the field of economy and trade, education and science, publishing, tourism, radio and television, communication, as well as on the establishment of twin relations between the cities of Almaty and Istanbul, Turkestan and Bayburt. A few months earlier, the Department of Cultural and Humanitarian Cooperation was created in the Kazakh SSR’s Ministry of Foreign Affairs to coordinate the activities of state ministries, departments, creative unions, and public organizations in the implementation of foreign cultural and humanitarian ties.

On the same day, Presidents Nazarbayev and Özal held a bilateral meeting. They discussed a wide range of issues related to the establishment and expansion of cooperation in trade, economic, scientific, technical, and cultural spheres. 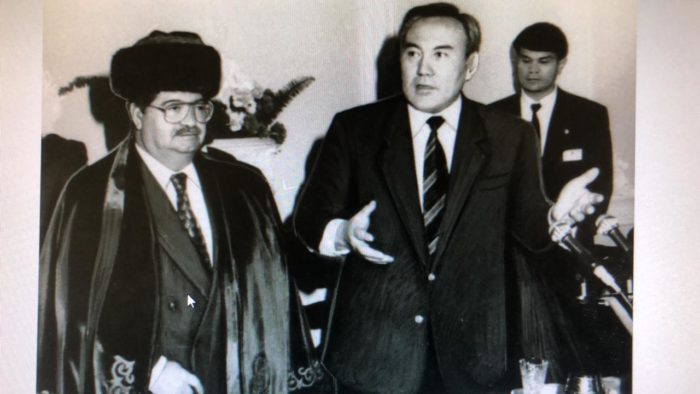 Turgut Özal and Nursultan Nazarbayev. Photo from the archive of the Library of the First President of the Republic of Kazakhstan – Elbasy

President Nazarbayev, having familiarized the distinguished guest with the economic and natural potential of Kazakhstan, stressed the importance of actively attracting foreign investment and using foreign experience, particularly the Turkish one, in the context of Kazakhstan’s transition to a market economy. Özal noted Turkey’s intention to develop bilateral mutually beneficial relations with Kazakhstan in several important areas of economic and cultural cooperation.

According to the notes that I have preserved from this conversation, the distinguished guest said that during negotiations with the President of the USSR, Mikhail Gorbachev, he stated that the successful implementation of reforms in the Soviet Union was of great importance for Turkey, which intended to develop economic cooperation with Kazakhstan, Azerbaijan, Turkmenistan, Ukraine, and other union republics. In his view, one of the priorities could be the use of Turkish technologies in the implementation of modern communications.

In addition, both sides emphasized the prospects of creating joint ventures in the field of mechanical engineering, light industry, and processing of secondary raw materials in metallurgy. The Turkish side offered to establish a direct air link between Istanbul and Almaty.

Particular attention was paid to the expansion of cultural ties, arrangement of regular meetings of representatives of the creative intelligentsia, the mutual holding of days of culture, literature and art, the establishment of closer contacts with compatriots living in both countries. Nazarbayev informed his counterpart of the establishment of the Association for Kazakhstan – Turkey Friendship. Özal also officially invited the Kazakh leader to visit Turkey. The invitation was accepted with gratitude and this visit took place on September 25-26, 1991.

The next day, March 15, 1991, the distinguished guest laid flowers at the Glory Memorial in the Panfilov Guardsmen Park and visited the Medeo skating rink.

On the same day, the heads of state signed the Agreement on Cooperation between the Kazakh SSR and the Republic of Turkey in Almaty’s House of Friendship. For Kazakhstan, this was the first international treaty.

It expressed the desire of our peoples, united by close cultures, languages, spiritual heritage, and traditions, to further expand and deepen cooperation on a long-term basis in the political, trade and economic, scientific, and technical, cultural, humanitarian, information, and other fields. The agreement consists of 11 articles.

Article 3, for example, reads: “The parties will create favorable conditions for the development of direct contacts, commercial transactions between Kazakh and Turkish enterprises and firms. To this end, the Parties will assist each other in holding trade fairs, exhibitions, opening representative offices of companies and organizations, and facilitate the mutual exchange of delegations, the development of business contacts.”

The Article 5 states that “the Parties will promote the establishment of air communications, the development of radio broadcasting, television and telephone communications between Kazakhstan and Turkey using the most modern technologies.”

In article 9, “The parties expressed their intentions to establish consular relations between the two countries, as well as to open consular missions on a reciprocal basis. The parties reached an agreement on regular consultations between the Ministries of Foreign Affairs on issues of bilateral relations and major international problems of mutual interest.

On the assignment from President Nazarbayev, I wrote the draft agreement myself. Having no precedents, I had to study the texts of similar international treaties of the USSR, published in the Bulletin of the USSR Ministry of Foreign Affairs.

One should note that according to the records I have, Özal first visited Moscow, where the Presidents of the USSR and Turkey signed the Treaty of Friendship, Good Neighborliness and Cooperation between the USSR and Turkey, as well as the Agreement on the Abolition of Double Taxation and Agreement on trade, economic, scientific, and technical cooperation. Then, during a visit to the Ukrainian SSR, a Joint Statement between the two countries and the Agreement on Cultural Cooperation were signed.

Our intention to sign a comprehensive Agreement on Cooperation caused a negative reaction from the then leadership of the USSR Ministry of Foreign Affairs, whose senior representative insisted that we did not have such a right. From my side, it was stated that this is the instruction of the President of the Kazakh SSR and, besides, we are endowed with such a right by Article 14 of the Declaration of State Sovereignty adopted on 25 October 1990.

After the agreement in the state ministries and the approval of the senior leadership, the text of the draft agreement was transferred to the Turkish Embassy in Moscow, and we were told that we would receive the answer in Almaty. Upon the arrival of the Turkish delegation, we received some comments that did not affect the main provisions of the agreement. According to Article 11, the agreement was subject to ratification by both parties in accordance with the legislation of each of the parties.

The latter document expressed the intentions of the parties to hold regular consultations on the state of bilateral relations and on topical international problems, to establish consular relations and open consular missions on a reciprocal basis, to promote the development of direct ties between government bodies, firms and companies, sister cities links, contacts between scientific, cultural, youth and public organizations, the development of tourism and sports.

The agreement on cooperation with Turkey was ratified on June 18, 1991, at the IV session of the Supreme Council of the Kazakh SSR. According to my notes, 268 members voted “for” this decision, 2 “against”, 1 “abstained”, 3 did not vote.

Further, the main content of the articles of the Agreement was outlined, examples of the implementation of mutual agreements were given, I emphasized that the President and the Government attached great importance to the full realization of the potential of this Agreement. It was noted that the significance of the agreement was not limited to the function of developing bilateral relations. It opened the way for the development of business ties through Turkey with the countries of the Middle East and Europe. The results achieved in the establishment and development of cooperation between Kazakhstan and Turkey were further developed and intensified during the following visit of the President of the Kazakh SSR to Turkey, the terms of which were being worked out through diplomatic channels.

I noted in the conclusion that the agreement with Turkey was aimed at the further development and strengthening of friendship, cooperation, and mutual trust between our states, in line with the UN Charter. Taking this into account, the government asked the Supreme Council of the Kazakh SSR to ratify the Agreement on Cooperation between the Kazakh Soviet Socialist Republic and the Republic of Turkey, signed on March 15, 1991, in Almaty by Presidents Nazarbayev and Özal.

During the preparation of Nazarbayev’s visit to Turkey on September 13 of the same year, my meeting with Ambassador Vural took place in Moscow. At the suggestion of the Turkish side, the visit was scheduled for the end of September, since in October parliamentary elections were to be held in Turkey and a new government was created.

According to my notes, Vural said his President wanted to discuss the position of Kazakhstan regarding the independence of the countries that were part of the Soviet Union, changes in the political situation in the Soviet Union after the events of August 1991 in Moscow, the proposal to sign a trade agreement between our countries and several protocols to it, the intention to open a Turkish consulate in Kazakhstan.

In response to my question about the opening of a consular mission of Kazakhstan in Ankara, the Ambassador said that he had discussed it with the Minister of Foreign Affairs, but the political situation in his country at the time was unstable.

During the visit of President Nazarbayev to Turkey on September 25-26, 1991, the heads of the two states signed a Memorandum of Understanding, in which they announced their intention to create a Business Council and develop cooperation in the field of transport, air traffic, telecommunications, loans, trade relations, natural gas supplies from Kazakhstan to Turkey, economic cooperation, tourism and sports, cooperation in the fields of education and technology. They also signed the Agreement between the Kazakh SSR and the Republic of Turkey in the field of transport and communications. In addition, the agreement between the governments of the Kazakh SSR and Turkey on trade, economic, scientific, and technical cooperation was signed.

Ultimately, the first visits by President Özal to Almaty in March 1991 and President Nazarbayev to Ankara in September 1991 laid solid foundations for fruitful cooperation between Kazakhstan and Turkey, which has been successfully developing and strengthening over the past 30 years of Kazakhstan’s independence.