2021 has begun with significant political activity in Kazakhstan. On Jan. 10, legislative elections took place to elect members of the Mazhilis, the lower house of parliament, and the maslikhats (local representative bodies). These elections were the first since the implementation of the new national reforms designed to further increase the openness, fairness and transparency of Kazakhstan’s electoral system. The parliamentary elections marked another significant milestone in Kazakhstan’s political history. They demonstrated our determination to ensure that our political system is democratic, pluralistic and open. At the same time, the government acknowledged that Kazakhstan’s political development journey is not yet over. 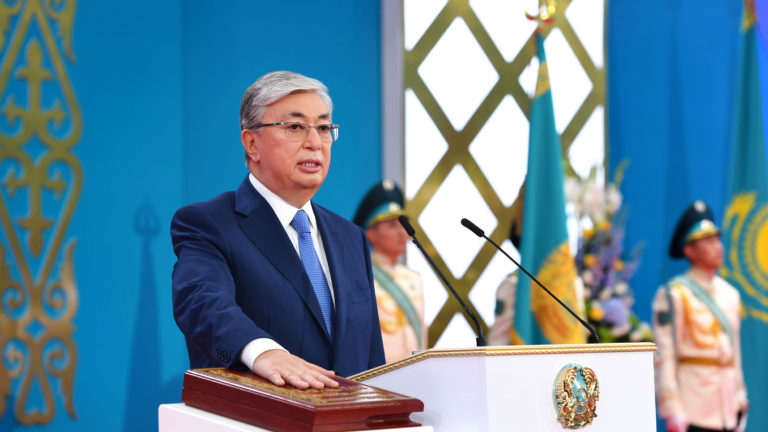 Tokayev was sworn into office during his inauguration in June 2019. Photo credit: akorda.kz

In this regard, on Jan. 15, the President of Kazakhstan, Kassym-Jomart Tokayev, proposed to the newly elected parliament a third package of political reforms aimed at further modernising Kazakhstan’s political and human rights system.

One of the main proposals is to reduce the threshold for political parties to gain seats in the lower house of parliament from 7 percent to 5 percent. The President noted that this will contribute to the development of political competition in the country. Also related to all future elections, the President proposed to introduce the option “against all” on the ballots. The Head of State stressed that this initiative will contribute to the protection of citizens’ electoral rights. Indeed, the option “against all” gives more power to the people to express their opinion on the political situation in the country, or voice their disapproval.

Currently, Mayors (akims) of regions, cities of republican significance and the capital of Kazakhstan are appointed to the post by the President on approval of the maslikhats. Mayors of districts and rural areas are appointed to the post by Mayors of regions on approval of the maslikhats. The government is implementing changes to this system to transfer to the people the power to choose Mayors. In this regard, the introduction of elections of rural Mayors was proposed by the Head of State. They may be held this year in some rural districts. President Tokayev announced in his statement to parliament that once these elections take place, Kazakhstan will then proceed to the election of district Mayors. The plan is to continue to switch from appointments to the election of akims. Such direct elections will contribute to political legitimacy and accountability, as well as further enhance democratic politics and civic engagement in the country.

President Tokayev also proposed to legally formalise the institution of online petitions to provide citizens with an additional avenue to voice their opinions and concerns.

In the sphere of human rights, the Head of State instructed to adopt an additional law on the Commissioner for Human Rights and strengthen the Ombudsman’s Office. This will include the creation of their regional offices.

It is worth noting that previous packages of reforms have already been implemented or are in the process of being so. The first package of reforms was presented at the meeting of the National Council of Public Trust in December 2019. They include instituting parliamentary opposition, which consolidates additional guarantees for the representation of parliamentary minority parties in the governing structures of the legislative body.

The number of signatures needed to create a political party with the ability to contest elections was halved, and a 30 percent quota for women and youth on electoral party lists was introduced. Furthermore, procedures for political activism were simplified.

The second package of reforms was announced by President Tokayev in September 2020, in his Address to the people of Kazakhstan. The reforms include transition to direct elections of rural Mayors from 2021, instructions to improve legislation to combat torture, human trafficking, and protect citizens (especially children) from cyberbullying, as well as instructions to accede to the Optional Protocol to the Convention on the Rights of the Child on a Communications Procedure.

There is a common thread that runs through these reforms. Their implementation will facilitate strengthening the system of human rights protection, expand civic participation, develop parliamentarism and a multi-party system, and further democratise the country.

Implementing major political reforms does not happen overnight. This process requires careful consideration. At the same time, as noted by President Tokayev, Kazakhstan should not be satisfied with what has already been achieved. That is why new reforms and measures should continue to be implemented.