By Zhanna Shayakhmetova in International, Kazakhstan’s Independence: 30 Years on 16 February 2021

NUR-SULTAN – Kazakhstan will celebrate the 30th anniversary of its acceptance as a full member of the United Nations (UN) in 2022 to commemorate the events of Mar. 2, 1992, which took place less than three months after Kazakhstan declared its independence. This was a major step towards international recognition of an independent Kazakhstan.

President Nursultan Nazarbayev signs the Convention on the Rights of the Child on Feb.16, 1994. Photo credit: UNICEF.

A year later, the UN started its activities in the country by unveiling the first United Nations (UN) office on Feb. 16 in Almaty. 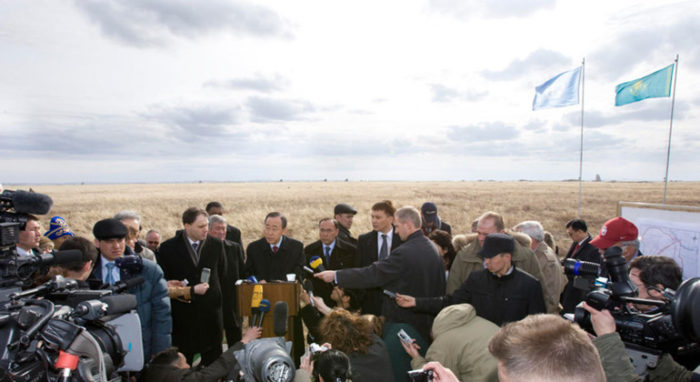 Since joining the UN, Kazakhstan has participated in all of its significant events and hosted major international forums under the UN auspices.

Kazakhstan’s key international initiatives were voiced from the UN rostrum. The UN has become the main platform for promoting the large-scale anti-nuclear and anti-war initiatives of former President, Nursultan Nazarbayev.

In 2009, the UN General Assembly adopted by consensus a resolution proposed by Kazakhstan, which established an International Day against Nuclear Tests on Aug. 29. On this day in 1991, Kazakhstan closed the Semipalatinsk nuclear test site. 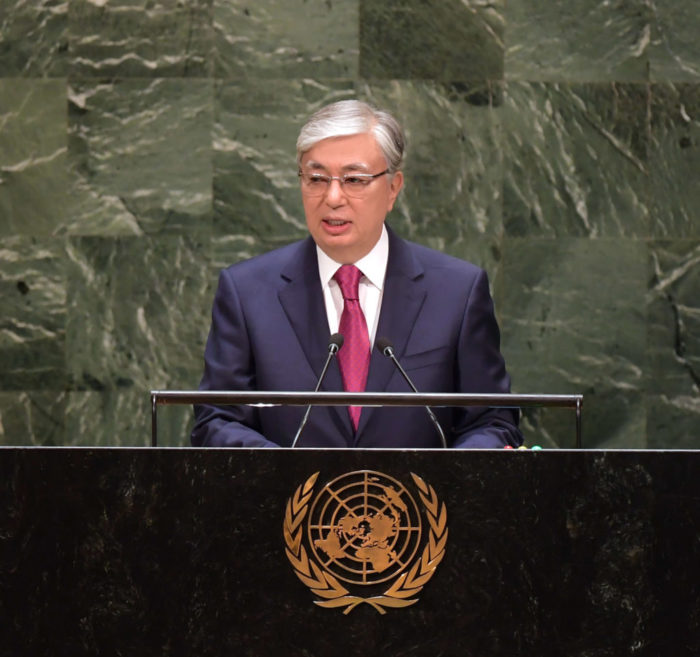 Kazakh President Kassym-Jomart Tokayev reaffirmed his country’s commitment to seeking a nuclear-weapons-free world in his address to the Sept. 24 74th Session of the General Assembly of the United Nations in New York. Photo credit: Akorda Press.

In 2017-2018, Kazakhstan became the first Central Asian country to be elected to the UN Security Council and made its contribution to strengthening global security, cooperation, and development.

The UN section was represented at the EXPO 2017 in the Kazakh capital and attracted more than 100,000 visitors.

During his first months in the presidency Kazakh President Kassym-Jomart Tokayev paid an official visit to the new building of the UN office in Almaty. Tokayev said that the country is committed to the UN principles and intends to cooperate with the international community to preserve security, stability, and protect human rights.

President Tokayev noted the importance of partnership in the implementation of Sustainable Development Goals (SDGs) in his address at the 74th session of the UN General Debates during his visit to New York in September 2019.

“Kazakhstan firmly pursues a policy of inclusive and sustainable development, comprehensive dialogue and peaceful endeavors…  As a responsible member of the global community, Kazakhstan will not cease to contribute to the collective effort to promote peace and advance human rights, dignity, and prosperity,” said the President.

Tokayev also proposed “to establish in its premises a UN Centre for SDGs with a mandate to assist countries of Central Asia and Afghanistan.”

Currently, 27 UN agencies together with the Kazakh government and people work on a broad range of issues, including economic and social development, environmental protection and disaster relief, the promotion of good governance and human rights, gender equality, and women empowerment.

“When the first UN office was opened in Kazakhstan on Feb. 16, 1993, at the time, there was a different situation and our assistance to Kazakhstan was mainly to serve the country’s immediate needs, including humanitarian assistance,” UN Resident Coordinator for Kazakhstan Michaela Friberg-Storey said in an interview for this story. 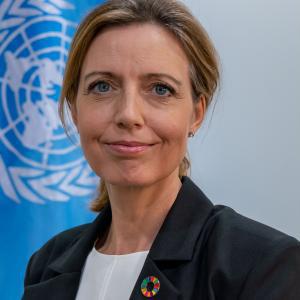 “Since then, the UN Country Team in Kazakhstan has continued to support Kazakhstan’s development efforts. We are no longer providers of foreign aid. We have become Kazakhstan’s partner to work together to resolve some of the remaining development challenges to create an even more prosperous society,” she added.

Friberg-Storey noted that the UN’s aim is “to ensure that every woman, man, girl and boy are part of the development journey which Kazakhstan is undertaking and in our work at the United Nations we focus on the most vulnerable persons.”

In 2020, the UN and Kazakhstan signed the UN Sustainable Development Cooperation Framework (UNSDCF) 2021-2025. This agreement is the major document of joint activities of Kazakhstan and the UN for the next five years.

“The new UN Sustainable Development Cooperation Framework is a roadmap of priorities of the UN development work agreed with the Government of Kazakhstan. It covers the next five-year period and should bring greater results in human development, equal participation, increase institutions’ effectiveness, foster environmental sustainability and inclusive economic growth,” said Friberg-Storey.

The UN in Kazakhstan has also focused on helping the Kazakh authorities and the population in response to the COVID-19 pandemic. It included measures for responding to a crisis situation, the supply of medical items and personal protective equipment, and the training of healthcare workers.

“Community engagement is more important than ever as we battle the health crisis and work to overcome the socio-economic consequences of the pandemic,” said Friberg-Storey. “As has been stated by UN Secretary-General Antonio Guterres, one of the global priorities for 2021 is a reset for the twenty-first century, where our governance of critical global commons needs to be reinforced and re-imagined.”

The UN Resident Coordinator for Kazakhstan said that the UN system in Kazakhstan supports the country’s aspiration to join the ranks of the 30 most developed countries of the world by achieving the Organization for Economic Co-operation and Development (OECD) standards and playing an active regional role.

Friberg-Storey noted that the 2030 Agenda for Sustainable Development and its 17 SDGs are an excellent instrument that can help Kazakhstan to effectively achieve its development aspirations as articulated in Strategy 2050 and the subsequent reform agenda, in partnership with the civil society, the private sector, and other international actors.

“We are committed to the people of Kazakhstan – making sure we leave no one behind,” she concluded.