By Zhanna Shayakhmetova in International on 28 January 2021

NUR-SULTAN – Kazakhstan has jumped up 19 positions and now ranks 94th out of 180 countries and territories in the 2020 Corruption Perceptions Index (CPI) released Jan. 28 by Transparency International. 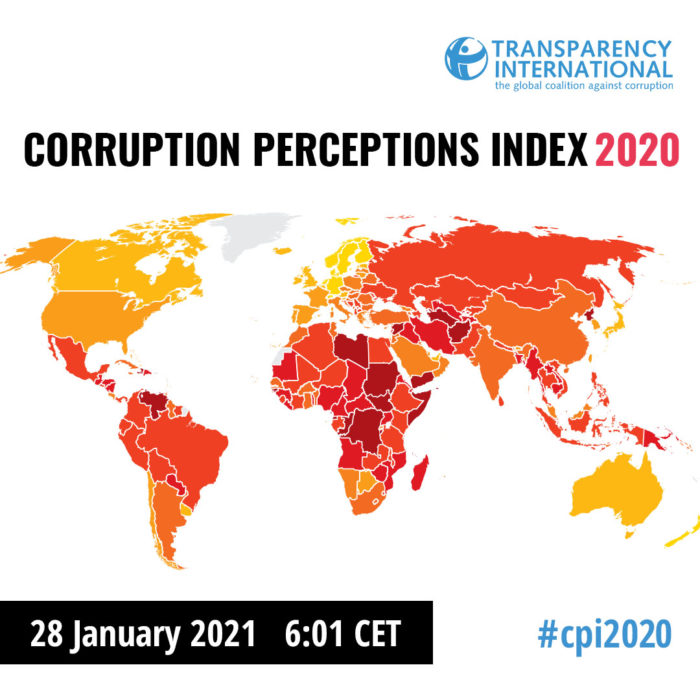 This year, Denmark and New Zealand with 88 points took the leading positions in the index.

According to the release, Kazakhstan has improved its positions in the CPI rating amid an emergency situation in the healthcare sector and threats to the stability of democratic institutions due to the country’s work on fighting corruption. The experts positively assessed the activities of the Kazakh government, which has adopted measures to support people and businesses during the pandemic and amendments to increase responsibility for corruption and digitalization of the public services sector.

The authors noted that official statistics on corruption offences have become publicly available in Kazakhstan among other countries in Central Asia. The country has also adopted legislative provisions with financial rewards for whistleblowing.

The Civic Foundation Transparency Kazakhstan reported that the response to corruption in Kazakhstan has shifted from a purely reactive approach to a preventive one since 2015.

Kazakhstan’s ranking was decided with an estimate based on nine sources. Experts from four rating agencies raised their assessments of the anti-corruption measures taken and the other five – kept their assessments at the level of the previous year.

The Global Insight Country Risk Ratings increased their scores from 35 to 47 points, the IMD World Competitiveness Yearbook – from 55 to 61 points, the PRS International Country Risk Guide – from 43 to 58 points and the World Justice Project Rule of Law Index – from 36 to 38 points.

In 2019, Kazakhstan was the best performing country in the Central Asian region in the CPI.

The Transparency International Kazakhstan reports that the number of corruption cases in Kazakhstan has decreased over the past three years while the number of prosecutions of public officials for corrupt activities saw an increase in recent years.

“According to the results of a sociological survey on corruption experience (9,000 respondents across the country), only 13.4 percent of respondents and 9.2 percent of small and medium-sized businesses reported that they had encountered corruption when contacting government agencies,” reads the report.

The authors warned that the pandemic has exposed vulnerabilities in healthcare and public service sectors worldwide and that the Central Asian region was no exception.

The 2020 edition of the CPI ranks 180 countries and territories by their perceived levels of public sector corruption, drawing on 13 expert assessments and surveys of business executives, reported the release. It uses a scale of zero (highly corrupt) to 100 (very clean).

Overall, the Transparency International reported that “corruption is undermining healthcare systems and contributing to democratic backsliding amid the COVID-19 pandemic” globally. Countries that have shown the best performance in the index have invested more into healthcare. These countries are better able to provide health coverage and are less likely to violate democratic norms and institutions or the rule of law.