NUR-SULTAN – Kazakhstan will take over the presidency at the Eurasian Economic Union in 2021 after Belarus. Full implementation of the EEU agreement, elimination of barriers to trade, development of cooperation within and beyond the union, and strengthening the functionality of the EEU Commission are among the country’s priorities, said Kazakh President Kassym-Jomart Tokayev at the Dec. 11 Supreme Eurasian Economic Council meeting held via a videoconference, the Akorda press service reported.

The meeting discussed the further development of the EEU, strategic areas of Eurasian economic integration through 2025, and the development of trade and economic cooperation with its main partners. The leaders also decided to grant observer status to Cuba and Uzbekistan.

Delivering his remarks, Tokayev said the coronavirus outbreak adversely affected the trade turnover within the EEU by 13 percent – about $39 billion.

“The Eurasian Economic Union’s trade with other countries fell even more, by 19 percent, totaling $447 billion. All this makes reaching effective cooperation, searching for growth reserves, and unlocking the economic potential of our union even more urgent,” said Tokayev.

Since the union was established in 2015, Kazakhstan’s mutual trade with EEU members grew by 33 percent, including a 25 percent growth in exports. The volume of investments hailing from the EEU member states increased by six percent.

“This shows that the union is growing in its influence, attractiveness, and is becoming more recognized throughout the world. We see great prospects in increasing trade and broad cooperation with brotherly Uzbekistan. We believe that Uzbekistan’s participation in the Eurasian project will harmoniously supplement our bilateral relations and cooperation within the Central Asian region,” said Tokayev. 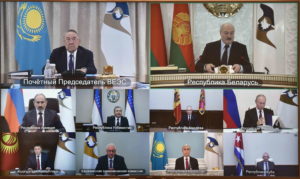 He also suggested making more use of the region’s transit potential by modernizing transborder sections in transport corridors, including completing the construction and modernization of Russia’s section along the Western Europe – Western China highway.

“Asia is truly becoming the region of the 21st century. It accounts for 28 percent of the global GDP and the figure will continue to grow. Increasing our on the East will open new opportunities in transport and logistics. We, as Eurasian countries, must fully unlock our transit potential,” said Tokayev.