By Aidana Yergaliyeva in Nation on 31 December 2020

NUR-SULTAN – The Kazakh political party leaders debated on Dec. 30 live on air on the Khabar national television channel with seats in the Majilis (lower house of the Parliament) at stake. The citizens watched the pre-election debates live unlike the last debates in 2016 that were pre-recorded. 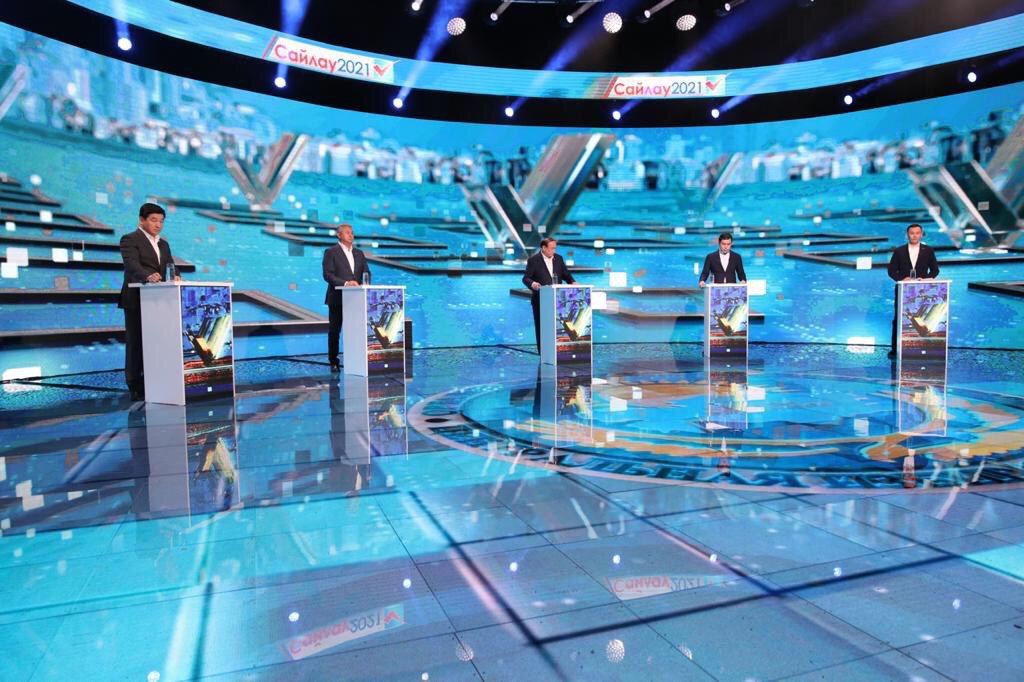 According to Nur Otan First Deputy Chair Baibek, one third of 255 specific measures of the Nur Otan party will address issues of economic development and recovery from the pandemic. The party plans to allocate 21 trillion tenge (US$49.81 billion) to economic recovery and removing barriers to business. The party’s agenda also includes ensuring water supply and road construction to 3,500 villages.

Ak Zhol party leader Azat Peruashev stressed the need for the Kazakh National Bank to lower the base rate and refinance all loans to small- and medium-sized businesses (SMEs) at 6 percent. Peruashev also noted the importance of holding a tax amnesty and lowering the value-added tax. The party also proposed to toughen the requirements for foreign companies involved in subsoil use.

Auyl party leader Ali Bektayev called on the government to focus more on agriculture and developing villages. Bektayev stressed the need to cut imports and substitute them with domestic crops. The party’s proposals were to allocate funds to subsidize local production and reimburse utility costs.

Adal party political council member Yeldar Zhumagaziyev stresses the need to develop domestic goods in general. According to him, Kazakhstan spends all of its attracted investments to purchase goods abroad. To change the situation, the party suggests reducing the base rate of the Kazakh National Bank by 4-5 percent, introducing a moratorium on tax increases, as well as introducing  new indicators to measure the economy.

People’s Party of Kazakhstan leader Aikyn Konurov suggested that the Kazakh government is largely detached from social reality in the country. The party leader called for the need to build “a people’s economy.”

“Cosmetic reforms do not achieve anything, transnational companies are not interested in the development of our country. We need a people’s economy! [We need] to use human resources with the ability to work, and to provide decent wages that keep up with the growing economy, but the people do not see it,” Konurov said.

Konurov stressed that the average income of citizens in dollar terms has not grown since 2008. According to the party leader, building a people’s economy will help increase incomes.

Aiman Zhussupova, an expert of the Institute of World Economics and Politics (IWEP)  under the Nursultan Nazarbayev Foundation, stressed that the debates were lively and constructive in nature and increased the interest of the Kazakh public in the process.

“The level of polemics has also significantly increased, making the debates more dynamic, lively and meaningful. In the final debates, the debate participants followed a certain political decorum in relation to each other due to the event status and respect for the positions held. Nevertheless, it was not without attacks and sharp questions. As observers stressed, ‘the questions were much tougher and trickier compared to the 2016 debate,’” she said.

The expert noted that the new level of the inter-party debates reflects “the growing level of the political culture in the country and the demand of citizens for a clearer expression of the interest of the population by the parties.”

This is the only televised debate that was confirmed by the Kazakh Central Election Commission. Prior to this, the party representatives also went on air during the Dec. 22 televised debates, where they discussion national values and ideology.

The elections to the Majilis and Maslikhats (local representative bodies) will take place Jan. 10.