By Staff Report in Business on 5 October 2020

Investment attraction is one of the main tasks that the Kazakh government has been working on in recent years. During the years of its independence, Kazakhstan has attracted $330 billion worth of foreign investment from more than 120 countries. The global pandemic, which significantly affected the global economy, also had a large impact on the investment industry. Deputy Minister of Foreign Affairs of Kazakhstan Almas Aidarov spoke about the changes in approaches to attract investments to Kazakhstan amid the pandemic. 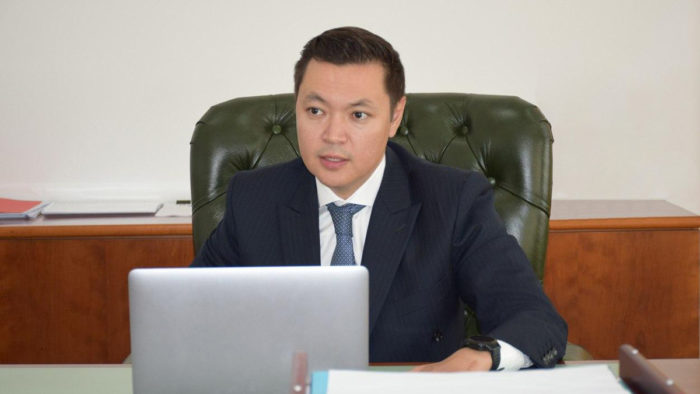 – Crises are a profitable time for investments, because the prices of shares and business always fall at such times. But the risks of bankruptcy in the context of economic turbulence are also great. How is the investment sector doing today?

– The world today is experiencing one of the most serious recessions in the last century. According to the World Bank, the global economy will contract by 5.2 percent, while the International Monetary Fund (IMF) forecasts a decline of three percent. Analysts at the United Nations Conference on Trade and Development (UNCTAD) have revised forecasts of global direct investment flows, and instead of a fall by about 15 percent, which was announced at the beginning of the year, we are now expecting about a 40 percent decline in global Foreign Direct Investment (FDI).

In the first quarter, we recorded a decline in the gross inflow of direct investment, which was quite expected. At the same time, the government has taken a number of timely measures to minimize the negative effect on existing plants, ongoing projects and projects that were almost ready for implementation.

– How much investments did Kazakhstan attract since the beginning of the year, and in what areas and for what projects?

– The investment decision-making process is quite lengthy and varies depending on the industry, the donor country as well as the corporate procedures of companies. If we talk about the statistics of foreign direct investment, then according to the National Bank of Kazakhstan, in the first quarter of 2020, the volume of gross FDI inflows amounted to more than $3.5 billion, while most of the traditionally attracted investments in the mining industry accounted for 65 percent.

The manufacturing industry accounts for nine percent of the total volume of foreign direct investment, the transport and warehousing sector accounted for more than five percent. Today, with the participation of foreign investors, about 200 investment projects are being implemented in the country in non-resource sectors of the economy including the agro-industrial sector, the mining and metallurgical sectors, mechanical engineering and production of components, petrochemical and chemical industry, renewable energy sources, transport and logistics and other sectors.

In 2019, 40 large projects with the participation of foreign investors worth about $1.1 billion were implemented. This created approximately 3,500 jobs.

We expect foreign investors to commission 35 large projects worth $2.5 billion, 12 of these projects received $799 million worth of investments. These projects included participants such as the German Linde Gas, the French Total Eren and Urbasolar, the Japanese Hitachi and other companies.

One of the most important projects is the construction of an international airport in Turkestan. Turkish investors from YDA Holding are investing about $206 million and creating 400 permanent jobs. Turkestan annually receives about one million tourists, with the construction of the airport, their flow will increase.

A five-star hotel of the international hotel chain Rixos is also under construction in Turkestan. It is planned to be commissioned by the end of this year.

In July, Allur and Tatneft agreed to jointly produce 3.5 million passenger and truck tires a year in Kazakhstan. Production is expected to start in 2022.

– What measures are being taken today to increase investment in the country?

– In his address to the nation on Sept. 1, Kazakh President Kassym-Jomart Tokayev clearly outlined measures and priorities for implementing the investment policy. Full disclosure of the industrial potential of the economy of Kazakhstan is an important measure.

By the end of the year, the production of Hyundai small-unit assembly cars in Almaty is set to begin. At the first stage, 30,000 units will be produced per year and up to 45,000 units at the second stage. Today, the total investment has reached more than 28 billion tenge (US$65.1 million). Subsequently, the localization of production will be increased to 51 percent. Car devices will also be produced in Kazakhstan.

The President announced the introduction of a new instrument – investment agreements with strategic investors, which will cement the agreements between the state and the investor. These measures amount to investment preferences, concessional financing, partial guarantees, export support mechanisms, reimbursement by offset against tax liabilities as well as guaranteed procurement by the state, quasi-state sectors and subsoil users.

Since the beginning of the year, more than 20 investment contracts worth 300 billion tenge (US$697.6 million) have been concluded through the online platform www.egov.kz. We have completely revised the approaches of Kazakhstan’s foreign missions to work with investments. In the last months, we have developed three-year investment programs for 66 foreign institutions. This is a plan that determines the volume of investments we expect from this country, the list of specific companies we want to work with during this period, and the list of industries that will be covered.

– What do you think the main area of interest for investors is in Kazakhstan right now?

– In my opinion, there is great interest in agriculture, but the potential is yet to be tapped.

Naturally, for major players, interest in the mining and metallurgical complex and in solid minerals, remains unchanged. To date, over 1,000 licenses for solid minerals have been issued and are in private hands. It is very important to introduce them into circulation. This is a great opportunity for new investors who can fully realize the potential of the mining and metallurgical complex, including its processing and the export of finished products.

For example, the products of the Russian company EuroChem for the production of mineral fertilizers in the Zhambyl region will be delivered not only to the domestic market, but will also be exported to Russia, China, countries of Central and Southeast Asia, and the Middle East.

The third key area is in the transport and logistics sector, interest in which is created by the transit potential and the existence of already established basic infrastructure. We have launched a multimodal Eurasian transport corridor. Five railway and six automobile international routes now pass through Kazakhstan. In the coming years, the construction of all major highways and seaports will be completed. The necessary infrastructure conditions have already been created for overland transit between Europe and Asia. As a result of this, we can see a progressive growth in the volume of freight traffic through the territory of Kazakhstan.

At the initial stages, the wagons returned from Europe half empty, now we already see the additional loading of containers heading in the opposite direction from the European Union (EU) – Kazakhstan – China, which account for more than 70 percent of flow. Investors understand that routes through Kazakhstan can become even more competitive and are ready to consider infrastructure projects.

At the same time, transit concerns not only cargo, but also digital data. The transit of Internet traffic between Europe and Asia has great potential. It is necessary to develop fiber-optic communication lines and international route corridors aimed at servicing digital transit. For this, we have the development of data centers in the northern regions which boast competitive electricity prices, favorable climate, and low seismic potential.

The fourth area is the sectors of the service economy. Education and healthcare are turning into a huge commercial niche, with an observable accelerating demand for these services.

– Are there enough government guarantees for investors in Kazakhstan?

– I think that the legal infrastructure for investment activities in our country meets all international standards. Almost all spheres of the manufacturing industry and agriculture are provided with government preferences. All large foreign investors are distinguished by their high commitment to social responsibility and making a significant contribution to the development of production locations. That is, the availability of preferences is not the most important issue. The stability of legislation plays an important role, since there were volatility risks in the business model.

The head of state also drew attention to this matter, and by the end of this year, the corresponding changes will be adopted. Considering that competition for investments all over the world is increasing, and developed countries are implementing a policy of repatriating investments, we must offer the most promising conditions for investors.

– What should an investor entering Kazakhstan evaluate and understand?

–  Firstly, an investor evaluates the level of protection for his investments, and this is ensured by the rule of law, the institutional environment and the stability of legislation.

We understand that the legislation is not completely perfect in every sense and there is room for improvement. A good tool in this case was the implementation of English law in the Astana International Financial Center (AIFC), which is more understandable for foreign players. In addition, the country’s leadership has always prioritized the needs of investors, therefore there are dialogue platforms at all levels including the Foreign Investors’ Council that has been functioning under the chairmanship of the President for 22 years and the Council on Improving Investment Climate under the Prime Minister’s Office.

We have an investment ombudsman institution as a tool for pre-trial and out-of-court dispute settlement. But nothing stands still, the world is evolving, conditions are changing, so we need to be flexible and not be afraid to adapt to the times. Business quickly adapts and if we do not keep up with the pace of innovation, there is a risk of losing existing investors and not attracting new ones.