By Zhanna Shayakhmetova in Nation on 23 September 2020 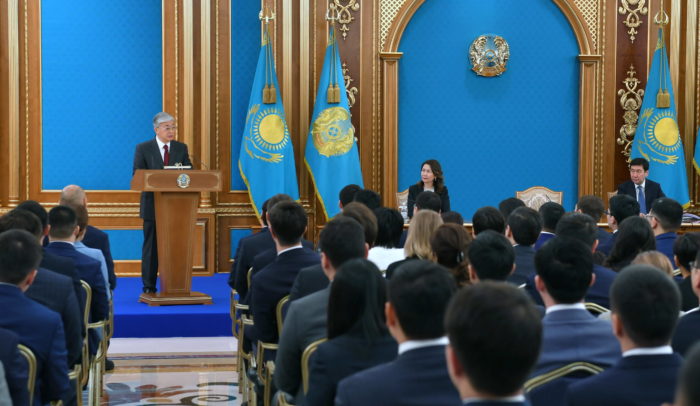 The Expert Cooperation Council intends to promote the idea of a hearing state and to that end, the council will develop recommendatory solutions to the ministry’s activities.

Dalenov emphasized that the objective of the youth personnel reserve is to create a transparent social lift for young people.

“New specialists will bring new vision and ideas to the government. We are ready to meet regularly and discuss the innovative ideas for the formation of an effective national economy,” added Dalenov.

The idea to create the Presidential youth personnel reserve was one of the key planks of Kazakh President Kassym-Jomart Tokayev’s election platform. Last year, 300 people were selected to join the reserve.

This year, some members of the youth reserve have received new positions.

Yernur Rysmagambetov, 34, was appointed the Astana International Financial Center (AIFC) Authority CEO on Sept. 14. A native of Zhezkazgan Rysmagambetov and a graduate of the California Technology University and London University College. Previously he served as a director of the AIFC Bureau for Continuing Professional Development (BCPD). He was also named one of the 100 New Faces of Kazakhstan in 2017. The 100 new faces of Kazakhstan project featured 100 people from different regions, representing different age groups and ethnicities who have succeeded during the years of independence.

In August, Askar Klyshbekov, 36, was appointed as the head of the department of passenger transport and highways in the North Kazakhstan region. Klyshbekov graduated from the Kazakhstan Institute of Management, Economics and Forecasting with a degree in Master of Business Administration. He previously worked in companies involved in transport and logistic sectors.

Zulfiya Suleimenova, 30, started her career at the Ministry of Ecology, Geology and Natural Resources in January. She works as a Deputy Director of the Climate Policy and Green Technologies Department. Previously she worked at the UN Economic and Social Commission for Asia and the Pacific in Bangkok. She is currently pursuing her PhD degree at the National Institute of Political Studies of Japan.

“We are developing our climate policy,” Suleimenova spoke about her activities at the ministry on the Strategy 2050 website. “We have two main directions. We need to mitigate the effects of climate change and reduce greenhouse gas emissions… Our challenge is to create policies and regulations to drive emission reductions… We are also developing measures to adapt to a changing climate and reduce economic damage.”

Member of the Presidential youth personnel reserve Tilektes Adambekov has an ambition to work in the civil service. While working in the business world, he recently initiated the meeting of the members with heads of state bodies.

“The meetings will help ministers to identify talented youth. They will learn about their skills and work experience and learn what ideas they have. Ministries have different activities and goals. Our focus groups should see the internal situation of each government agency, and then give their proposals, projects,” Adambekov said in an interview with Kazinform.

Adambekov admitted that the participation in the youth personnel reserve program was a good experience for him. He has a chance to meet like-minded peers, acquire new skills and exchange knowledge with other members.

“I am also looking for an interesting job.. I studied for eight years in China as part of the Bolashak Scholarship. Now my goal is to contribute towards my country’s progress.”