By Zhanna Shayakhmetova in Nation on 11 September 2020

NUR-SULTAN – Kazakh President Kassym-Jomart Tokayev met Sept. 10 with the managers of the large farms during his working visit to the Kostanai region, reported Akorda Press.

Farmers of the Kostanai region have increased their production volumes despite the difficulties caused by the pandemic outbreak. The harvesting campaign is at its final stage in the region. Some 3.1 million hectares of grain, or 76 percent of the crop has been threshed. Some 9,100 combines are involved in the work, and the harvesting will be completed in the near future.

Tokayev noted that agricultural development determines economic competitiveness. “The economy of the Kostanai region is developing well. We have important tasks ahead. We will have a good harvest this year,” he added. 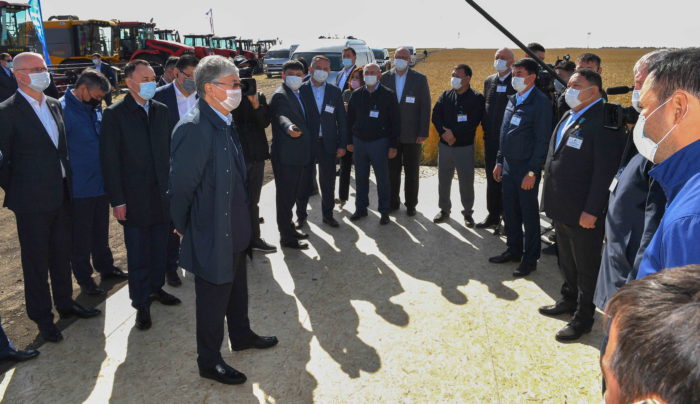 President Tokayev met with the managers of the large farms during his working visit to the Kostanai region. Photo credit: Akorda Press.

The President said that the government is now working on exports as part of the Eurasian Economic Union (EAEU). A regional meeting of the heads of the border regions will take place in November. Kazakhstan’s course towards integration within the EAEU remains in effect.

Tokayev also visited the Milkh plant that produces ice cream and sour milk products. The plant processes 130-150 tons of milk per day and produces more than 120 types of dairy products. Thirty percent of products are exported to Russia.

On this day, President Tokayev inspected the harvesting campaign in the North Kazakhstan region.

“The North Kazakhstan region is one of the major regions in agriculture. The main task is to collect the crops. Crop diversification is also important in terms of exports. We have a large market, and our products are in demand in the Chinese market,” he said.

Agricultural diversification is underway in the region. The area of ​​oilseeds is approximately 1 million hectares. Some 61 billion tenge (US$141 million) was attracted to the agricultural sector since the beginning of the year.

The North Kazakhstan region leads in mineral fertilizer production in the country. This year, it is planned to produce 130,000 tons of fertilizers for 2.3 million hectares.

Germany’s company CLAAS plans to assemble agricultural machinery in Petropavlovsk in the future.

Tokayev met with residents who moved to the North Kazakhstan region as part of the state program for resettlement of residents from the labor-surplus regions in the Chapayevo village.

The Akim (Governor) of the region Kumar Aksakalov said that doctors, teachers, machine operators and other specialists will receive support in the form of new rental housing and stable jobs.

A pilot project on building housing in rural areas is underway for the next two years. Last year, 428 houses were built, and 788 houses will be built this year.