By Dmitry Babich in International on 11 September 2020

MOSCOW – In the framework of the foreign ministers’ meeting of the Shanghai Cooperation Organization (SCO) Kazakhstan’s Minister of Foreign Affairs Mukhtar Tileuberdi met the Foreign Minister of the Russian Federation, Sergey Lavrov. 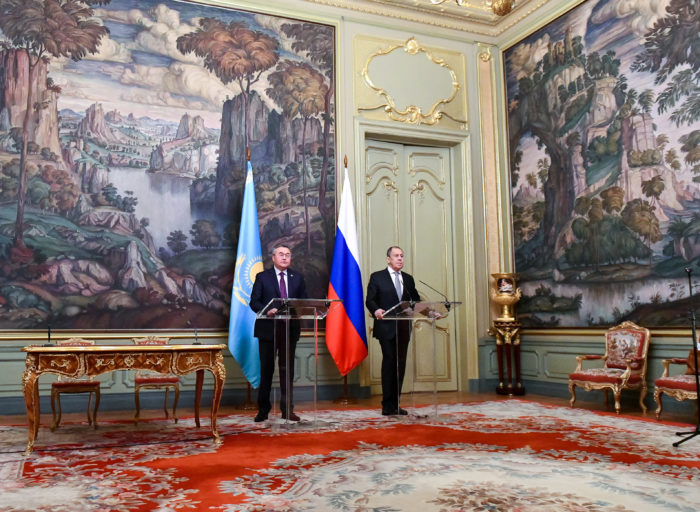 In Moscow, Tileuberdi was met with a speech from his Russian counterpart, Sergey Lavrov, who stressed the significance of Kazakhstan as an emerging market and a powerful player in Eurasian politics. In this speech, the Russian minister stressed the importance of the first off-line meeting between the two top diplomats of the two countries within the biggest territories in Eurasia.

“Esteemed Mr. Foreign Minister, dear friends, despite the obstacles created by the coronavirus situation, I am glad to note that we are continuing our intensive contacts, and pursuing political dialogue”, Lavrov said. “Now, thanks to the meeting of the Council of Foreign Ministers of the Shanghai Cooperation Organization, we have a chance to have a full-fledged round of talks.” 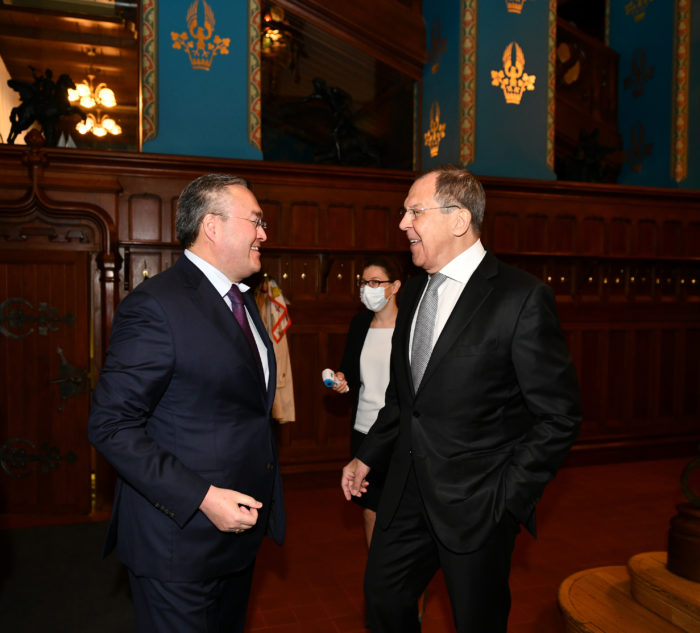 The two ministers received a message of support from President Tokayev during their talks, who thanked Russia for the help to Kazakhstan during the COVID-19 pandemic. “The President expressed his gratitude to the Russian Federation for the help which it provided to Kazakhstan during the period of the coronavirus pandemic. The head of state stressed the importance of further intensive cooperation between Kazakhstan and Russia in the sphere of health care,” the official statement on the meeting between President Tokayev and the Russian ambassador in Nur-Sultan, Alexey Borodavkin said. The meeting took place on the same day as the talks in Moscow.

Tileuberdi and Lavrov discussed  the ongoing cooperation and the opportunities to further develop the cooperation between Kazakhstan and Russia in the political and economic fields. It was stressed that the two countries must pursue their cooperation in the framework of prominent international organizations, such as the Commonwealth of Independent States (CIS), the Eurasian Economic Union, and the Organization of the Collective Security Treaty Organization (CSTO).

During the meeting, the protocol was signed enforcing the agreement, signed in the year 2000, between the two sides on opening a new consulate of Kazakhstan in the Russian city of Astrakhan. On its side, Russia was allowed to open an additional consulate in the city of Uralsk. According to the new protocol, the Kazakh consulate in Astrakhan will also service the territories of the Russian regions of Volgograd, Orenburg, Samara and Saratov.

The two sides discussed the problems related to restarting transport communications between Kazakhstan and Russia, which were affected by the lockdown.

“The situation on the borders will depend on the epidemiological authorities, and our two countries are in contact on this issue,” Lavrov said. There is a common wish to return the situation to normal. Hopefully, the situation will allow us to do so in the near future.”

Lavrov praised the level of cooperation between the diplomats of Russia and Kazakhstan. “Our ministries can always work on the difficult issues and bring them to the UN, the OSCE, and other international organizations. In this situation, there is simply no place for difficulties. As for the positive issues, such as the Eurasian economic integration and joint work in the framework of the CIS and CSTO – this is always a priority in our work,” Lavrov said.