Kazakh Constitutionalism: Learning From Past Experience and Exploring Prospects For the Future

Today, almost thirty years after the proclamation of sovereignty, we can say with confidence and a sense of pride that Kazakhstan is an equal and respected member of the international community and has all the features of established statehood. A key role in the success of the country belongs to the Constitution of Kazakhstan, which laid the foundation for all the reforms implemented in the country over the years. 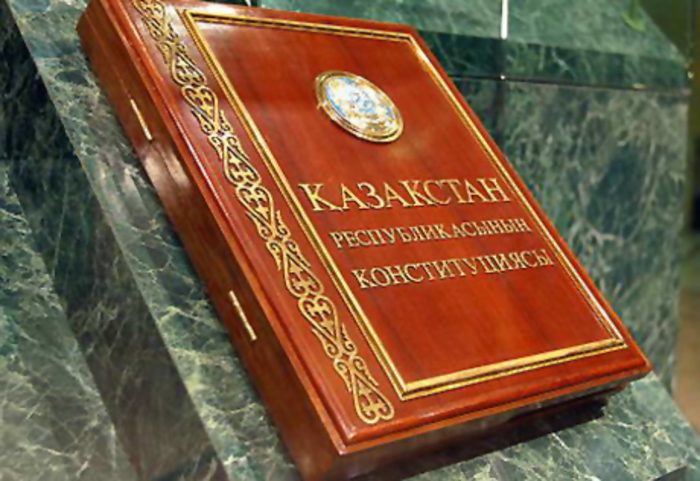 The key components of the constitutional identity of Kazakhstan, the starting principles and pivotal landmarks of the country’s evolution were determined at a nationwide referendum on Aug. 30, 1995, when the Constitution was adopted. Taking into account the realities of particular times, it was subject to adjustments during the constitutional reforms of 1998, 2007 and 2017. Over the past twenty-five years, the Kazakh format of the constitutional process has been worked out and approved. It is based on a careful attitude to the Basic Law, ensuring its stability and dynamism. Intrusion into the body of the text is allowed only in the case of a special need, which must be backed up by serious argumentation as well as an explanation of the expected consequences and possible risks. This format without fail requires deep and large-scale public expertise, participation in the constitutional process of as many Kazakh citizens as possible in the form of various events (meetings, round tables, scientific conferences, individual consultations, appearances in the media), a nationwide discussion of projects with a subsequent maximum accurate identification of the position of the majority and its reflection in the final text.

Strong President – Influential Parliament – a Government Accountable to the People

At the final stage of the constitutional process, politics must be relegated as legal experts prepare a draft law. The President acts as the guarantor of non-interference of politics in the law, and, consequently, of ensuring future high-quality constitutional law enforcement.

It is also very important that the legal community be consolidated in the priority area of ​​social transformation. Foreign scientists and specialised international and foreign organisations always participate in the constitutional process. They were asked to carry out an independent examination of the draft of the new Constitution in 1995, so an Expert Advisory Council was created, which, along with domestic specialists, included foreign experts such as Chairman of the Russian Research Center S. Alekseev, Counselor to the French State Council Jacques Attali and President of the French Constitutional Council Rolland Dumas. 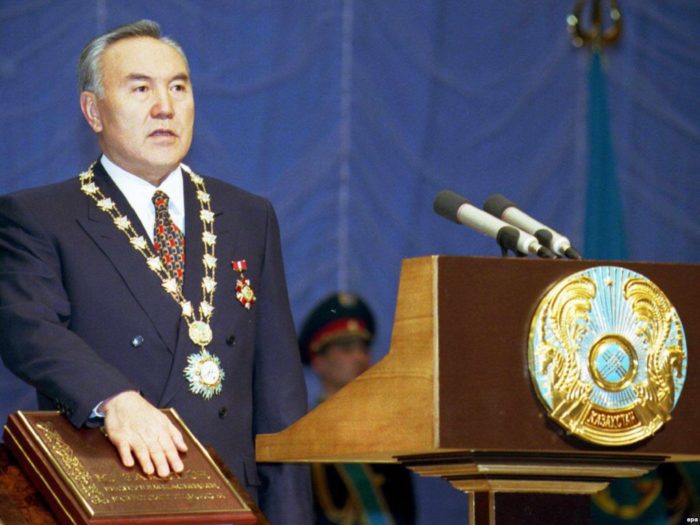 First President of Kazakhstan Nursultan Nazarbayev takes the oath of office on the country’s Constitution on Jan. 20, 1999. Photo credit: E-history.kz.

By tying together and combining in purpose the content, order, forms, means and executors – all the fundamental building blocks – Kazakh constitutionalism became possible through the adoption of state programs. It is based on documents approved by the president such as the annual addresses to the nation of Kazakhstan, strategies, concepts and others.

Many of our fellow lawyers from other countries positively assess the results of the purposeful systematic evolution of the sphere of law. The main directions of such work were laid down in the State Program of Legal Reform of Kazakhstan, approved by the decree of the First President of Kazakhstan, Nursultan Nazarbayev, dated Feb. 12, 1994. It was succeeded by the Concepts of Legal Policy of Kazakhstan of 2002 and 2009.

This year, the Constitutional Council proposed to develop a new document in the field of legal policy, which will ensure the continuity of the country’s course towards improving the quality of people’s lives and strengthening statehood with the rule of law. The commitment to constitutionalism, declared at the dawn of independence and constantly ensured by faithful adherence to the letter and spirit of the Basic Law, found its unshakable confirmation in the transfer of supreme power in Kazakhstan that took place in 2019.

Before resigning from the office of the Head of State, the First President of Kazakhstan turned to the Constitutional Council for an official interpretation of paragraph 3 of Article 42 of the Constitution in terms of the list of grounds for the early termination of presidential powers. The Council confirmed that the constitutional status of the President of Kazakhstan implies his right to terminate his powers in accordance with his own will, which is an independent basis for the early termination of presidential powers. 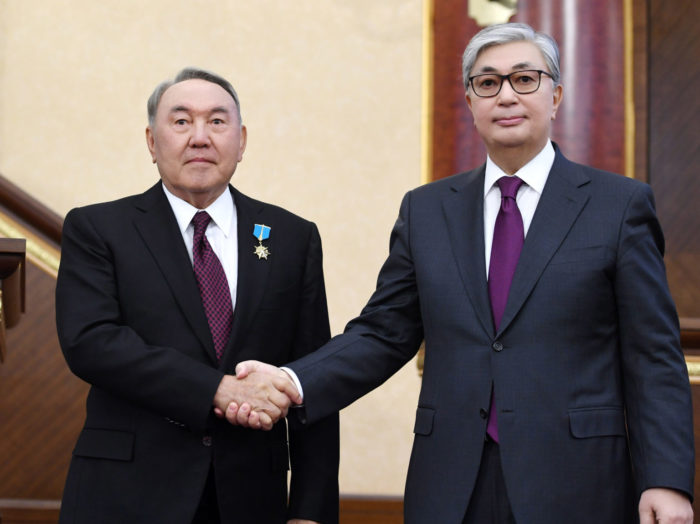 The First President of Kazakhstan Nursultan Nazarbayev was awarded Khalyk Kakharmany title and a special insignia – Golden Star at the joint meeting of the Houses of Parliament on March 20, 2019. On this day, Head of State Kassym-Jomart Tokayev has taken the oath to the people of Kazakhstan. Photo credit: Akorda Press.

On March 19, 2019, in his Address to the Nation, Nazarbayev stated, among other things, the following: “As the founder of the independent Kazakh state, I see my future task in ensuring the coming to power of a new generation of leaders who will continue the reforms carried out in the country.”

According to paragraph 1 of Article 48 of the Constitution, the powers of the President of Kazakhstan were transferred to the Chairperson of the Senate of the country’s Parliament. On June 9, 2019, early elections were held, where Kassym-Jomart Tokayev was elected the new president.

As part of the implementation of the electoral platform of the current president and his address, Kazakhstan continues the work on consistent consolidation of constitutionalism. Among the priority issues are solutions to social problems, support of entrepreneurship, implementation of the concept of a “hearing state”, political transformation, development of civil society, etc. The formula of state power becomes – a strong, plenipotentiary President – an influential, capable Parliament – a Government accountable to the people. All issues and processes discussed and taking place in the country have a pronounced constitutional and legal nature and are closely related to the implementation of the creative potential of the Basic Law.

The National Council of Public Confidence, created by the president, develops systematic measures to address current pressing issues in society. They are mostly aimed at further democratising state and public life. In this regard, one can note the progressiveness of recent legislative acts concerning new procedures for organising and holding peaceful assemblies and opposition activities. These measures halved the number of citizens necessary to create a political party, introducing a mandatory 30 percent quota for women and youth on electoral party lists and decriminalising the article on defamation. They are of fundamental importance for the gradual transformation of society in accordance with the requirements of the times.

Ensuring the Supremacy of the Basic Law

This year, the entire world faced an unprecedented challenge. The COVID-19 coronavirus pandemic has shocked many countries. The international community is going through a difficult time and is looking for ways to solve this problem. The response to the pandemic touched upon the content of many constitutional provisions concerning a number of human rights and freedoms as well as the various tasks and forms of state activity.

In many countries, including Kazakhstan, the basis of all the measures taken to combat the coronavirus pandemic has to meet the requirements of the Constitution to ensure the rights and freedoms of the citizens. The state tries to fulfill its social obligations, to ensure the adequacy of restrictive measures in accordance with the degree of complexity of the epidemiological situation, without restricting the ability of citizens to conduct their affairs. Like other bodies of constitutional control, the Constitutional Council of Kazakhstan has had to adapt to the new conditions. In an era of digital transformation, constitutional proceedings were conducted in an electronic format. During the period of restrictive measures, many employees in the country worked remotely.

This year we are celebrating the 25th anniversary of the Kazakh Constitution. In honor of this important event, the National Action Plan was approved. The plan pursues one goal – to increase the authority of the Basic Law in society by unlocking its potential and ensuring direct action, while continuing the formation of the strong rule of law in the country. Since the beginning of the year, conferences, round tables, seminars, contests, and discussions have been held on these topics throughout the country. In the current situation, they have been transferred to an online format. Documentaries about the Constitution, about the development of the system of protection of constitutional human rights over the years in the country are now in production. To promote constitutional values ​​among young people, a thematic essay competition among university students was held, as well as a drawing competition among schoolchildren. Council members, judges, law enforcement officers deliver lectures in educational institutions and work collectives.

Over the past twenty-five years, the Constitution of Kazakhstan has shown its effectiveness while laying the foundation for deep socio-economic, political and other transformations. The current potential of the Basic Law, taking into account the results of the constitutional reforms carried out in the country, is capable of serving the progressive development of the country.

The author is Chairman of the Constitutional Council of Kazakhstan.