Respects for the Poet: Abai Kunanbayev is Lauded and Remembered in Moscow on his 175th Birthday

By Dmitry Babich in International on 11 August 2020

MOSCOW – Kazakstan’s Ambassador to Russia Yermek Kosherbayev paid his respect to the greatest Kazakh poet Abai Kunanbayev on the 175th anniversary of the Poet’s birth in the Semei region. 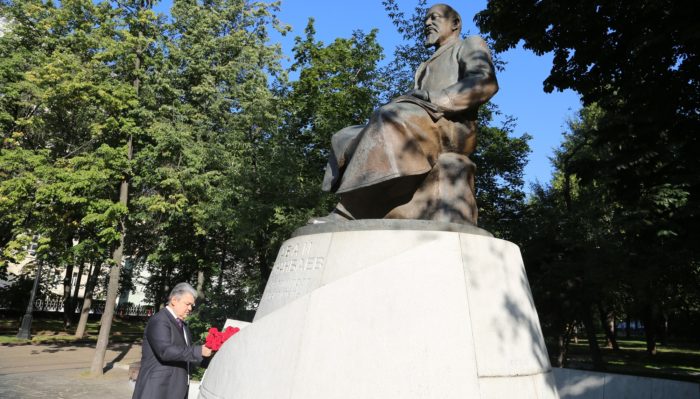 Kazakh Ambassador to Russia Yermek Kosherbayev laid flowers to the monument of Abai on Aug.10 in Moscow. Photo credit: Kazakh Embassy in Russia.

His Excellency the Ambassador, diplomats of the mission and representatives of the Kazakh Cultural Autonomy in Moscow  laid flowers to the monument of the Poet. The monument, which is placed in the cult-status green area next to Kazakhstan’s embassy in Moscow (Chistye Prudy, the Clean Ponds) has for years been the magnet  for poets, artists, singers and generally for individuals who love and cherish the poetic and philosophical legacy of Abai Kunanbayev.

Speaking  at the ceremony next to the monument Ambassador Kosherbayev and other speakers stressed the importance of Abai’s role in introducing the poetic world of Europe to Kazakhstan and vice versa. Thanks to Abai Kunanbayev, who was not only a great poet in his own right, but also a translator of the poetic works of the greatest Russians Alexander Pushkin and Mikhail Lermontov, as well as the greatest Germans Goethe and Schiller – thanks to him these universal poetic geniuses started expressing themselves in the great Kazakh language.

Philologists note that Abai Kunanbayev did not merely translate Pushkin or Britain’s lord George Gordon Byron – he gave their verses the language and style of the great steppes of his native land. The romantic heroes of the beginning of the nineteenth century acquired a new identity, under Abai’s magic pen the sorrows and hopes of Pushkin’s Onegin or Byron’s Don Juan became sorrows and hopes of contemporary Kazakhs.

This is the great spiritual link, a chain of many generations that links the art of Western Europe to the Eurasian souls of Russia and Kazakhstan. Pushkin took a lot from Byron. But researchers still admire how Pushkin reworked and softened the style and manner of Byron’s “Don Juan” to make it more fit for the second central figure of his legacy – charming Tatyana Larina. She is the second most important character of his great novel in verse, “Eugene Onegin” (it was discovered that Pushkin pondered naming the whole novel after Tatyana Larina, and not after a man). And Abai made Onegin a familiar figure to his compatriots, making his (translated) Onegin’s “Bayronism” akin to the ways and habits of Kazakhstan’s “fearless riders” of the 19th century. And Abai’s Tatyana has all the charms of a Kazakh faithful wife and dreaming maiden – very much like Abai’s first love Togzhan.

In their poetic images we can already discern the young Kazakhs of our times.