By Joey Long in International on 18 August 2020

NUR-SULTAN – Employees of the Kazakh Embassy in Norway took part in a bike ride in support of a world without nuclear weapons which was organized by the Bike for Peace movement, reported the press service of the Kazakh Ministry of Foreign Affairs.  The race was attended by representatives of the Norwegian parliament, municipalities, business people and academia. The event was timed to coincide with the 75th anniversary of the atomic bombing of Hiroshima and Nagasaki. 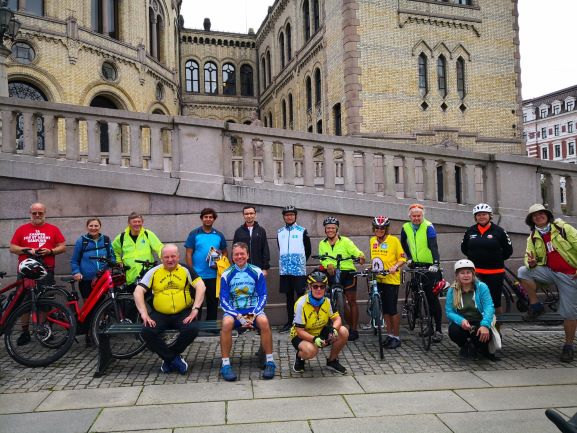 Over the course of several days, the participants visited cities in the provinces of Oslo and Akershus. Meetings were held with the mayors of the cities of Oslo, Lilleström, Yezheim and Eidsvol, as well as the leaders of the International Campaign for the Prohibition of Nuclear Weapons (ICAN) and Nei til atomvåpen (No to Nuclear Weapons). At the Ministry of Foreign Affairs of Norway, the participants of the race met with the Norwegian Special Representative for Disarmament Jorn Osmundsen.

Kazakh diplomats spoke about the consequences of nuclear tests at the Semipalatinsk nuclear test site, the history of dismantling the nuclear missile potential inherited from the USSR, as well as the importance of continuing efforts for global nuclear disarmament. The staff of the Embassy presented the book of the First President of Kazakhstan – Elbasy Nursultan Nazarbayev “Epicenter of the World” – which was published in the Norwegian language.

“Kazakhstan, at the time of gaining independence, had the fourth largest nuclear arsenal in the world. The country has since dismantled all of its nuclear weapons. This is a good example for other nuclear states, ” Tore Närland, president of the Bike for Peace movement, emphasized in his speech on the square in front of the Oslo City Hall. T.Nerland, who organized bike rides and rallies against nuclear weapons in more than a hundred countries, and remembered with special warmth his trip through the territory of Kazakhstan, including a visit to Semei.

Oslo Mayor Marianne Borgen, who is a member of the Mayors for Peace movement, also emphasized Kazakhstan’s role in the anti-nuclear movement: “This is a good example that shows that a worldwide ban on nuclear weapons is possible.”

Storting Deputy Himanshu Gulati shared memories of his trips to Nur-Sultan and Almaty. “We have great potential for expanding friendship and trade cooperation between Norway and Kazakhstan. As members of parliament, we would like to play an important role in this, ” said H. Gulati, who also took part in the arrival.