By Zhanna Shayakhmetova in International on 9 July 2020

NUR-SULTAN – Italian artist Michelangelo Pistoletto’s “Third Paradise” art installation was given a virtual unveiling ceremony to mark the 75th anniversary of the United Nations (UN) and to support the global fight against COVID-19 on July 8 according to the press service of the UN in Kazakhstan. The project is organized by the UN in Kazakhstan and the Artios creative agency with the support of the Nur-Sultan city administration. 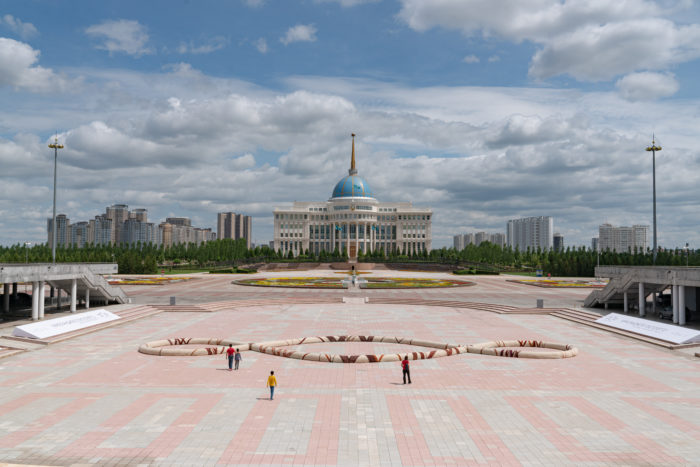 Along with the dance performance, Kazakh ethno-musician and composer Yedil Khussainov performed a rare type of guttural singing at the online opening of the installation.

The art installation, which was previously exhibited near the Louvre Museum in Paris, the UN Headquarters in Geneva, the European Council building in Brussels and other world’s leading art venues, now finds its place in the center of the Kazakh capital, at the Nurzhol boulevard.

“The “Third Paradise” invites people to dialogue on the future they want to see and serves as a constant reminder on how important it is to strive to create a sustainable environment and conscious consumption,” according to the release.

UN Resident Coordinator for Kazakhstan Norimasa Shimomura said that this art is inspired by the mathematical infinity sign, which usually consists of two circles. In Kazakhstan the symbol features three circles which represent the worlds of nature, technology, and a new world where people work together to bridge differences, promote peace through dialogue and sustainable development.

An important part of the art’s concept is promoting an environmentally friendly way of thinking and criticism of anthropocentric consciousness, which also reflects the main ideas and directions of the UN.

“Inclusive growth, prosperity and a secure life couldn’t be achieved without peace and a society where people work together to overcome their differences. The “Third Paradise” is an artistic expression of what is represented by the 17 Sustainable Development Goals, which were adopted by all countries, including Kazakhstan, back in 2015 and all countries are committed towards achieving them,” said Shimomura.

Pistoletto has been developing the idea of this symbol over the past ten years. “Third Paradise” references a third phase of humanity, which is conceptualized as a balanced connection between technology and nature, which reflects the desire of mankind to achieve the goals of sustainable development.

“It’s an honor to represent my work in Kazakhstan. “Third paradise” is about balance, unity and harmony. I hope that this symbol will bring great luck to your country,” said Pistoletto, who has himself recently recovered from COVID-19.

The art object is made from traditional materials of nomadic culture. In the creation of the 40-meter size installation local materials were used, including 193 square meters of white wool felt, symbolizing the number of the UN Member States, and authentic basqur (embroidered ribbons used for decorating the nomadic dwelling yurta), each of them has an infinity sign in the patterns, thus duplicating the message of the project.

“The wool felt from which the entire installation is created continues Arté Povera ideas of using natural materials, embodying environmentally conscious art. This symbol transforms reality, and is a vehicle for global ideas to reassemble the world, reflecting unity and sustainable development, which more than ever, resonates in this difficult time of pandemic for all countries,” said curator of the installation and Director of Artios creative agency Dina Baitassova.

The art installation is on display for the next two months.

It is expected to deliver the online educational seminars and master classes and UN75 dialogues as part of the project.

What is the Third Paradise?

In 2010 Pistoletto wrote an essay on his idea about “The Third Paradise.” In 2018-2020 the activity of the Third Paradise has further intensified through the development of an international network of embassies and forums.

According to the project description, the Third Paradise is a fusion between the first and second paradise. The first is the paradise in which humans were fully integrated into nature. The second is the artificial paradise, developed by human intelligence to take over the world through science and technology. The Third Paradise is the third phase of humanity, realized as a balanced connection between technology and nature.

The Third Paradise is a great new modern myth that encourages everyone to take personal responsibility and participate in a global vision. People are seen as gardeners who must protect this planet and heal global society. The symbol of the Third Paradise, a reconfiguration of the mathematical infinity sign, is made of three consecutive circles. The two external circles represent all the diversities and antinomies, among which are nature and technology. The central one is given by the compenetration of the opposite circles and represents the generative womb from which a new humanity will be birthed.