NUR-SULTAN – Kazakh President Kassym-Jomart Tokayev chaired an expanded government meeting July 10, during which Kazakh Prime Minister Askar Mamin reported on the country’s social and economic development in the first half of 2020 and the government measures to help the economy rebound from the COVID-19 pandemic consequences. 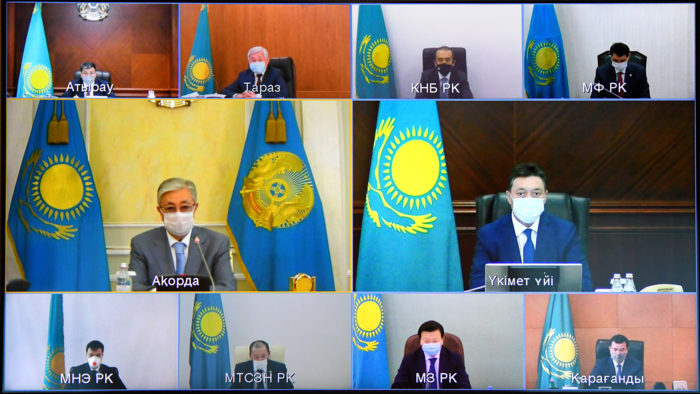 The Kazakh economy shrank by 1.8 percent, said Mamin. The real economy, however, witnessed sustainable growth, as production grew by 4.1 percent.

Primary drivers of the growth were from the construction industry with 11.2 percent growth and the processing industry with 4.8 percent growth, which was underpinned by an increase in the automotive industry (46 percent), pharmaceuticals (24 percent), metal product manufacturing (20 percent), light industry (8 percent), among others. Despite the economic slowdown, house commissioning also grew by 7.3 percent.

The services sector, which was disrupted by the pandemic after the country went into lockdown, shrank by 5.6 percent.

Mamin noted that the government will continue the countercyclical macroeconomic policy that includes easing the tax load on businesses and spending the budget to maintain economic activity as well as the development of human capital, the attraction of foreign direct investments, and the development of digital infrastructure.

Though numbers are an important part of every report, they might not show the real picture. And while the country is in the midst of the two-week lockdown introduced from July 5th to curb the rapid rise in coronavirus cases, during the meeting Tokayev criticized the government and the Healthсare Ministry, who, as he said, made serious mistakes in handling the pandemic, and constantly changes its proposed measures.

“Former management of the ministry (referring to former minister Yelzhan Birtanov, who quit the post after he was diagnosed with coronavirus) suddenly decided to separate symptomatic and asymptomatic cases, and now we no longer use this method. Such actions cause doubt among the people. Despite having sufficient time, the former management failed to prepare for the pandemic and all their projections on the number of patients and other indicators were false,” said Tokayev.

Amid an emergency situation like this, he asked the government to take the recommendations and demands of Healthсare Minister Alexey Tsoy as a top priority.

“Think of it like this: the healthcare minister has a special status and competency during the pandemic. I instruct the government and akimats (city administration) to provide daily reports to the ministry (of healthcare). I hope the situation will improve in two weeks, otherwise, in general, the confidence in the current government will have to be questioned,” said Tokayev.

Tokayev noted the need to create a separate commission that will identify mistakes in management which will directly report to him.

The economy and employment remain a priority, said Tokayev. Kazakhstan has earlier pledged six trillion tenge (US$14.5 billion) to support its citizens and businesses when the pandemic first hit the nation. An additional 150 billion tenge (US$121 million) were also allocated to address urgent issues, including the purchase of medicine and devices, an important component in the fight against the pandemic.

“I instruct the government and the National Bank to develop a package of additional measures to support industries and the population if the situation worsens. At the same time, state support should aim to generate the maximum effect. We are obliged to uphold the economy, primarily by maintaining employment and salaries. The government and the Atameken National Chamber of Entrepreneurs should complete the work to ensure digital control of this within two months,” said Tokayev.

The National Bank, he noted, should maintain an inflation rate within the 8-8.5 percent range, while also working to expand access to lending.

“The stability of the financial system remains an important issue. The National Bank considers the system to be quite stable, but consumer lending is growing, while there is no such growth in lending to real sectors of the economy,” said Tokayev, instructing the government and the national bank to develop state securities market and incorporation of international indices.

The lockdown and plunge in oil prices also put a strain on the nation’s budget, which lost nearly 1.7 trillion tenge (US$4.1 billion) this year.

Tokayev said that the first positive trends can already be seen, though the main task in the fight against the pandemic is to “stop the spread, localize the transmission of coronavirus and achieve significant results in the treatment of patients.” The achievement of these results, however, hangs on the responsibility of each citizen to personally follow the quarantine regime.

He also spoke about the SK Pharmacy company, the country’s only distributor of humanitarian aid coming into Kazakhstan, which recently faced accusations online of selling the medicines that were given to the country for free, and which should have been distributed for free.

“The Heads of the Medical Insurance Fund and the SK Pharmacy should be fired, and if needed, an investigation should be conducted. Those, who seek to benefit this way amid the pandemic, must be brought to justice. After my instructions, the work has begun, but it needs to be finished because ultimately it is an issue of national security,” said Tokayev, noting the growing panic among people who rushed to buy medicines and antiviral medicines in pharmacies that some did not even need, causing a critical shortage.

More channels should be created by which citizens can access reliable and correct information on COVID-19 treatment, including the use of telemedicine, TV channels and social networks.

“Otherwise, the incompetent advice of fraudulent doctors (referring to those, who spread misinformation online) will cause irreparable damage to public health,” warned Tokayev.

“I will be honest that while preparing for this meeting, I was advised to fire some heads of regions and state bodies, or even fire the entire current cabinet of this government. This would probably be well-received by the public and that I would score political points if I were to do so, but I do not need them. I am ready to listen and hear competent people, but I do not want to play to the public, I am not in that age or position,” said Tokayev.

Tokayev noted that the meeting focused on urgent measures. He said he will announce additional measures to revive the economy during this second state-of-the-nation address, but did not specify a date.