By Oksana Davydova in International on 1 July 2020

NUR-SULTAN – The spread of the idea of global security and peace and harmony between nations is the fundamental basis of the state policy forged by Kazakhstan’s First President Nursultan Nazarbayev, who is set to turn 80 on July 6, 2020. Few people know this, or give credit where it is due, but Kazakhstan greatly contributed to building a world free of nuclear weapons. 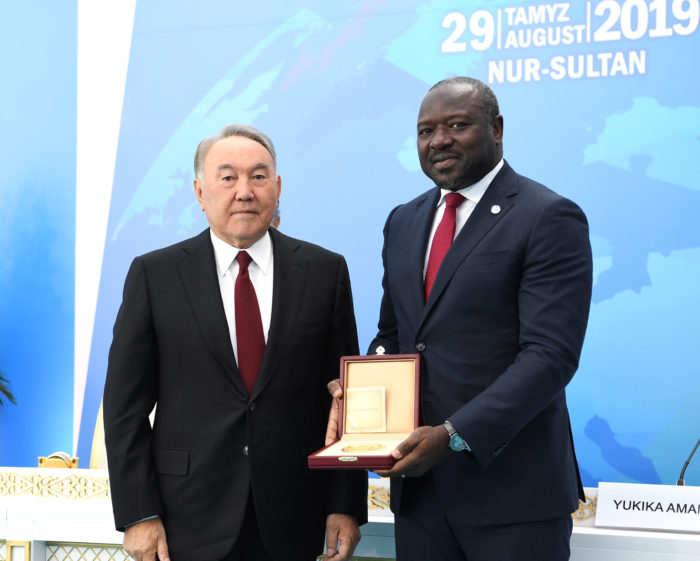 Kazakhstan’s First President Nursultan Nazarbayev presented the Nazarbayev Prize for a Nuclear-Free-World and Global Security award to Comprehensive Nuclear-Test-Ban Treaty Organisation (CTBTO) Executive Secretary Lassina Zerbo in Nur-Sultan on Aug. 29 in 2019. Established in 2016, the Nazarbayev Prize is awarded to prominent individuals for their contribution to nuclear disarmament and global security. Photo credit: Elbasy.kz.

The Chairman of the Committee on Foreign Affairs, Defense and Security of the Mazhilis (lower chamber) of the Kazakh Parliament and Member of the Nur Otan faction Mukhtar Yerman said that without the decisions of the Elbasy (Leader of the Nation) Kazakhstan would not have the same level of respect it now enjoys in the international arena, as there would be no multibillion foreign investments flowing into the country nor the joint innovative projects in various sectors of the economy.

– The importance of the anti-nuclear initiatives of Nazarbayev in establishing Kazakhstan as a cooperative member of the global community is undeniable. But let’s remember how it all began, with the Decree on the closure of the Semipalatinsk nuclear test site. It was a difficult time then, since the Union of Soviet Socialist Republics (USSR) still existed and the Soviet class of politicians still had power…

– You are right, but we must pay tribute to the visionary skills, iron will and determination of Nazarbayev. On Aug. 29, 1991, he closed the Semipalatinsk nuclear test site by issuing a formal decree. This very important decision was an unprecedented step that directly led to a significant reduction in the risks of using nuclear weapons for all of humanity. For Kazakhs, the closure of the nuclear test site was a historic step in the manifestation of a national political will and a rallying point for further efforts to develop an independent country. Nazarbayev consciously and systematically pursued this goal. We are aware of the contribution of the Nevada-Semei social movement to the fight to close the nuclear test site as well and a lot has been said and written about this. But it is also important to remember that the decision to create the Nevada-Semei movement was made on Feb. 28, 1989, and on March 1, the Chairman of the Council of Ministers of the Kazakh Soviet Socialist Republic (SSR) Nazarbayev created a republic commission to monitor the environmental situation in the Semei region with the participation of government agencies, experts, and medical specialists. Having studied the situation, the members of the commission recommended measures to sharply reduce, and ultimately to stop testing at the site. At the time, the USSR still existed as a global nuclear power and the Central Committee of the Communist Party of the Soviet Union (CPSU) and the powerful military-industrial complex had enormous political and administrative resources! Despite the party leadership, Nazarbayev took responsibility for solving the issue of closing the test site, and the public supported him in this measure.

– And when was the last test conducted at the nuclear test site? 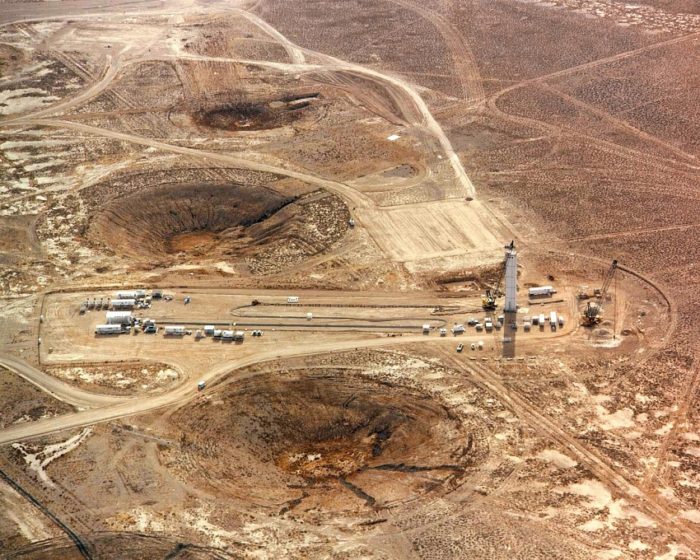 – On May 30, 1989, Nazarbayev raises the question about closing the test site at the Congress of People’s Deputies of the USSR; on June 9, the Politburo of the Central Committee considered the question “On the situation in the Kazakh SSR in relation to underground nuclear explosions at the Semipalatinsk nuclear test site.” However, on Oct. 19, 1989, another explosion was done. The Supreme Council of the Kazakh SSR adopted a resolution on the detrimental effects of tests on public health and an appeal to the Supreme Council and the Council of Ministers of the USSR with the request to close the nuclear test site. The Union Council of Ministers suggested the Kazakh leader close the polygon on Jan. 1, 1993 and conducted nine more nuclear tests in the period of 1990-1992. In response to this ultimatum, at the first session of the 12th convocation of the Supreme Council of the Kazakh SSR in May 1990, chaired by Nazarbayev, he required the government of the USSR to stop their testing. During those years, various international forums and actions against nuclear explosions took place. And finally, on Aug. 29, 1991, Nazarbayev made a historic decision that returned peace and tranquility to the homeland of great Kazakh poet Abai.

– The closure of the test site, on the one hand, put an end to nuclear testing, but, on the other hand, it must be understood that the test site is not just some vast space?

– Of course, in fact, we are talking about one of the largest military facilities in the world with a very complex and saturated infrastructure. Speaking from the United Nations (UN) rostrum in 1992, Nazarbayev emphasized that enormous funds are needed to improve the region and provide medical treatment to the victims of the testing. But this is only one side of the issue, the second and, perhaps, not less difficult is the presence of a huge number of nuclear warheads and their delivery vehicles, intercontinental ballistic missiles and strategic aviation, the fourth largest nuclear arsenal in the world.

The decision to renounce possession of such a powerful nuclear arsenal required political courage and was one of the first serious tests for the fledgling Kazakh diplomatic corps. However, the will and conviction of the Kazakh leader, his talent for interpersonal communications, the ability to build negotiations with the heads of world powers and align Kazakhstan with the global agenda at the time led to his success in resolving this question. According to Nazarbayev himself, “for the first time in world history, a weighty argument was made renouncing nuclear weapons.”

On Dec. 13, 1993, the Supreme Council of Kazakhstan ratified the Treaty on the Non-Proliferation of Nuclear Weapons (NPT). In the period of 1993-1995, enriched uranium and nuclear weapons were removed, mine launchers were scuttled, and the leaders of Kazakhstan, Russia, the United States and the Great Britain signed a Memorandum on Security Guarantees for countries that joined the NPT.

– What is the legal basis for non-proliferation of nuclear weapons today, what documents have been initiated by Kazakhstan and what do they guarantee?

– The international legal framework on this issue is very extensive. Our country, led by the First President, has made and continues to make a significant contribution to the replenishment and expansion of the framework. Even a simple listing of measures will run several pages so let me mention the most significant ones.

In 1996, Kazakhstan signed and subsequently ratified the Comprehensive Test Ban Treaty (CTBT). On Sep. 8, 2006, at the initiative of the Elbasy, the heads of fraternal states signed the Treaty on the Establishment of a Nuclear-Weapon-Free Zone in Central Asia in Semey.

In 2009, the UN General Assembly unanimously supported the proposal of Nazarbayev to declare Aug. 29 as the International Day against Nuclear Tests.

In 2015, the General Assembly adopted the Universal Declaration on achieving a world free of nuclear weapons, an agreement on the creation of a low enriched uranium bank in Kazakhstan was signed between Kazakhstan and the IAEA in Astana, and on Aug. 29, 2017, the opening ceremony of this facility took place. Nazarbayev took an active part in the work of the global summits on nuclear safety.

And on July 3, 2019, the new President of Kazakhstan Kassym-Jomart Tokaev signed a decree ratifying the Treaty on the Prohibition of Nuclear Weapons (TPNW).

Our country is considered one of the leaders of the global anti-nuclear movement.

– It is probably impossible to imagine what Kazakhstan would have been like now without the closure of the test site and the anti-nuclear initiatives of Nazarbayev. The Kazakh people never cease to thank him in their prayers for, besides some strategic concerns, this decision was made out of concern for future generations. That is, it is not only a matter concerning world peace, but also the fate of hundreds of thousands of people. In addition, the state has been providing support to all the victims of the nuclear testing.

– Returning to the historic decision of 1991 to close the Semipalatinsk nuclear test site, please pay attention to the details in this document. Everyone knows the first point, but then there are also a number of specific instructions. Firstly, to transform the testing ground into a research center, and secondly, to take measures for the socio-economic development of the region, social protection as well as improving living conditions and medical services for the population. The Soviet Union collapsed soon after and the burden of the costs fell on the shoulders of a young but sovereign Kazakhstan.

In Kazakhstan, the Law on Social Protection of Citizens who Suffered from Nuclear Tests at the Semipalatinsk Nuclear Test Site is currently in force, which establishes the status of citizens and classification of territories affected by long-term nuclear explosions and determines the types of compensation and benefits people are entitled to.

The closure of the nuclear test site and the abandonment of nuclear weapons are important political and economic decisions. Without these measures taken by the Elbasy, Kazakhstan would not enjoy the same level of respect it has now in the international arena. There would be no multibillion foreign investments as a reward for Kazakhstan’s efforts, no joint innovative projects in various sectors of the economy. Instead of building a progressive, dynamic and modern Kazakhstan, budget funds would have been spent on maintaining an aging military industrial complex capable of mass destruction, a system that is alien to human nature itself.

Nazarbayev made a historically justified choice, since the main trump cards of Kazakhstan are “not the country’s impressive reserves of weapons of mass destruction, but openness, peacefulness, sanity and moral authority.”

This article was originally published in the Russian language in Liter.kz.