By Zhanna Shayakhmetova in International on 24 June 2020

The United Nations (UN) in Kazakhstan has decided to celebrate Father’s Day, which is celebrated every third Sunday of June globally with the launch of its Equal Partners campaign to mark the Fathers’ Day. The campaign’s goal is to challenge traditional gender roles by encouraging the equal distribution of household tasks in families amid the global response to the outbreak. 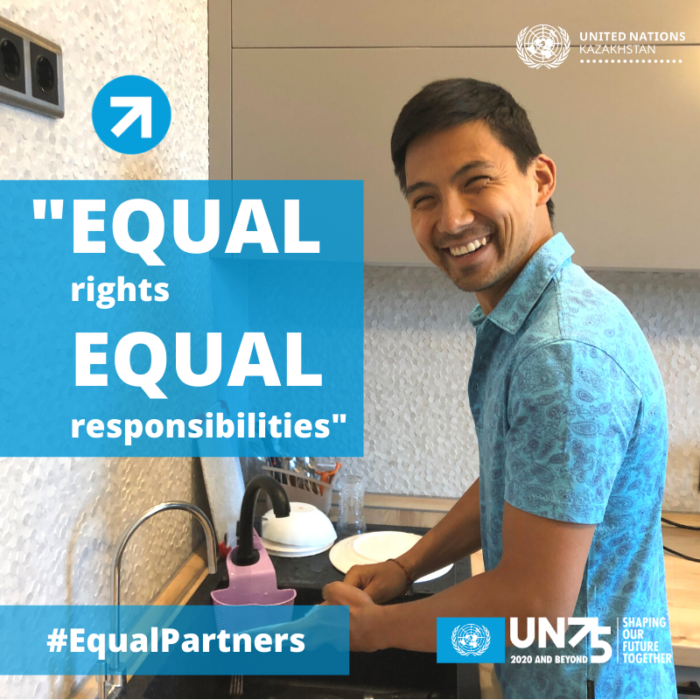 As part of the campaign, Almaty-based popular boys band 101 released a song dedicated to Fathers’ Day in collaboration with the United Nations Population Fund (UNFPA) and music producer Alikhan Mussatayev. The song is a social justice message set to music that encourages men to play a more active part in family life.

The UN also calls families to post photos and videos of what it takes to be #EqualPartners to inspire other families during this month.

The UN is focused on addressing the problem of unpaid women’s care work, which has increased due to school closures, leaving female family members at risk at home as a result of the COVID-19 outbreak.

“Despite the excess workload, women are more likely to try to help their spouses,” said UN Resident Coordinator for Kazakhstan Norimasa Shimomura. “It should be noted that other family members, including children, have begun to help their parents more with household chores. Due to the lockdown measures, a high burden has been put on individual family members and it is necessary to rethink how we distribute time resources and responsibilities within the household.”

It has been noted that the Kazakh people have begun to spend more time on educating children and caring for older family members than on everyday household chores during lockdown.

The UN Women and UNFPA conducted their Rapid Gender Assessment survey for the COVID-19 situation in Kazakhstan to assess the impact of the coronavirus pandemic on challenges faced by both women and men, including their economic empowerment and vulnerability, and how the changing situation is affecting their standard of life.

According to the survey, men were more ready to raise and care for children and older family members than to help with daily domestic tasks in Kazakhstan. But the average women’s time spent on household care has increased from 18 percent to 41 percent. Almost every third male respondent or 32 percent said that they started to help children more with their learning, as well as spending more leisure time with children and senior family members.

In this light, the response to the COVID-19 outbreak will allow for a significant overhaul in society’s approach to women’s unpaid childcare and domestic work.

“The workload under quarantine has increased significantly for both women and men. Most of the domestic work is related to maintaining order in the house, cooking and raising children. At the same time, the influence of gender stereotypes in the distribution of domestic functions is still being observed, especially in rural areas. Already, before the lockdown, another survey had shown how it is mostly women who take care of children under 14 years of age – staying at home when the child is unwell; making sure they are properly dressed; putting them to bed, helping with homework etc., with only about 3 percent of men performing any such tasks”, said UNFPA in Kazakhstan Representative Giulia Vallese.

The UN is committed to promoting gender equality. Social norms and behaviors continue to sustain the idea of traditional gender roles in society and obstruct the realization of true gender equality in many aspects of women’s lives, especially at home.

UNDP Resident Representative in Kazakhstan Yakup Beris said that “norms will change as economies develop. Changes in technology, coupled with new laws being passed by the government and the promotion of activism within society, with an emphasis on exposing people to new ideas through formal and informal channels will eventually pave the way for a new gender equal society.”