King of the Kushan dynasty Kanishka

The Kushan state was formed in Central Asia at the turn of our era. At the beginning of the 1st century, a significant part of the territories of Central Asia was united into the system of the vast Kushan Kingdom, which further extended its power to then-North India, today’s East Turkestan and Afghanistan. The world learned about the greatness of the Kushan Kingdom in the first century. Turks of the Kushan Khanate glorified King Kanishka (78-123 years). Fortunately, his real name, Khan Yerke, was preserved (as “Kanerka” – so his name was minted on coins). The main weapon of the wisest Khan was faith in God. Excellent knowledge of the teachings, ritual and prayers helped him. In the speeches of Khan and his rational politics, the people of the East saw that the Turks value actions and decency. Thus, Khan Yerke presented the East with faith in Tengri. 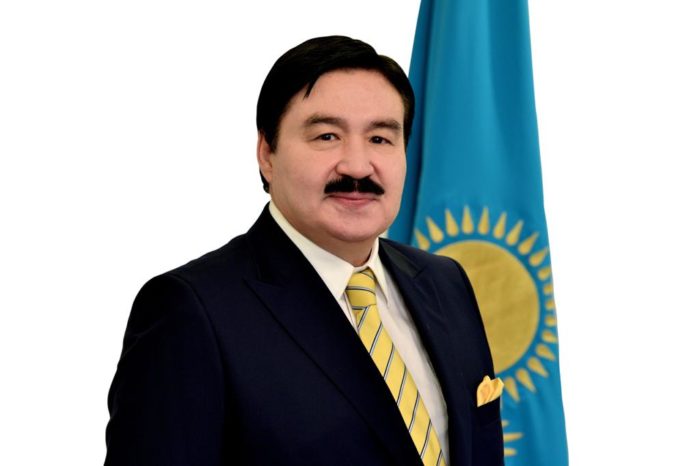 The idea of a new religion was extremely simple and clear: do good and the world will become kind to you. People, having understood this simple truth, accepted it. Not all nations had similar wisdom. This, obviously, attracted to the spiritual culture of Turks. Belief in Tengri strengthened the spirit of the people and called for great deeds. The supporters of Buddhism adopted the Turkic rite of veneration of the God of Heaven, Tengri Khan. They recognized the name Tengri and its teachings, through which Buddhism acquired new content (“mahayana.”) This fact is recorded in the history of Buddhism and India.

After the Kushans undertook aggressive conquests in India in the middle of the 1stcentury and subordinated states of North India, King Kanishka transferred the capital to the city of Purushapura (modern Peshawar.) This city became the largest centre of Buddhist theology, attracting many pilgrims from all over the world, from Central Asia to Java and from Korea to Sri Lanka. There Kanishka adopted Buddhism and was its zealous patron. He founded a number of monasteries, erected many Stupas and Buddhist temples, and encouraged the missionary activities of Buddhist monks. It was under his rule that Buddhism began to spread widely in Central Asia and China. So, Buddhism from a regional religion has become an international one.

Immediately after the conquest, gradual indianisation of the Kushans began. Indian culture, having perceived many of culture of the Central Asian peoples (including coin minting, architecture, visual arts,) itself had an enormous impact on the latter. The interaction of these cultures is vividly illustrated by the example of the emergence within the Kushan Empire of a particular style in the visual arts, called Kushan. The sculpture was the highest artistic achievement of the Kushans. It was part both in temple art complex and represented a special genre of art as well: such as Palace and Dynastic sculpture. In general, the indianisation of the Kushans especially strengthened with Kanishka. In Buddhist traditions, he rightfully occupies an important place.

According to historical information, the first stone statues of Buddha were erected under Kanishka, numerous fragments of which were found during the excavation of Stupas, cave and above-ground Temples. Later, archaeologists discovered the ruins of large Buddhist Stupas on the territory of Afghanistan, Uzbekistan and Kyrgyzstan. In addition, in Kazakhstan, monasteries and Stupas were found along the entire600-kilometer route from the Chinese border in the east to Kyzyl-Kent (near Karaganda in the centre of the country.) The Kushan era marked an important stage in the history of Buddhism. This is explained by the fact that Sakas (in Greek sources known as Scythians) were directly related to the Shaky clan from the central part of northern India, in which the Buddha Shakyamuni was born (or Sakyamuni – literally translated as “the Sage of the Saka clan.”) Proof of this fact is the genetic testing of the direct descendants of this spiritual enlightener, conducted by Kazakh scientists during an expedition to Nepal. The processing and analysis of DNA test data were carried out by the Kazakh Company “Shejire DNA” and decoding was carried out in the USA, in the world-famous laboratory “Family Tree DNA.” 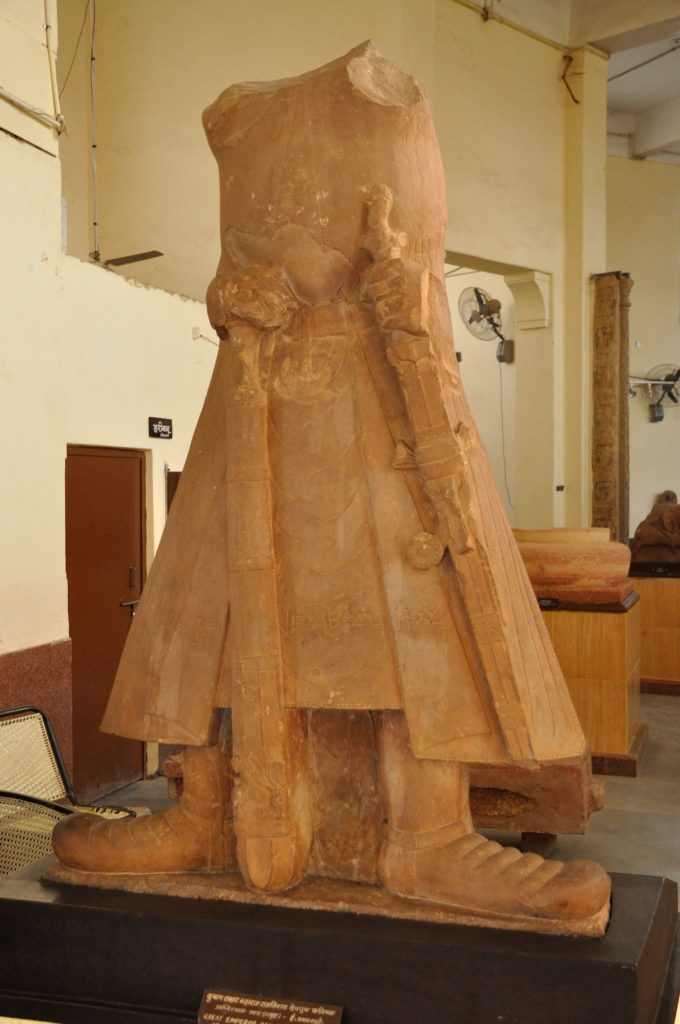 The statue of King of the Kushan dynasty Kanishka.

In addition, several indirect evidences were found to support this theory. These are artefacts where Sakas motifs can be traced. For example, the cult Buddhist Vajra object is reminiscent of the Adji sign denoting the deity Tengri.

Furthermore, while visiting Nepal, Bhutan and Sri Lanka, I found that some words have similar meanings with the Kazakh language. For example, there are such words as “aga,” “ata,” “ana,” “apa,” “koke,” “tate,” which over time are pronounced with slight phonetic changes and perceived slightly new meanings. It is noteworthy that the peoples of these countries speak different languages and have different cultures and histories. From this, it follows that the unifying factor of these states is Buddhism and these words entered their languages with the arrival of the first Buddhists. Thus, part of the inhabitants of modern India and neighbouring countries that were part of the Kushan Kingdom, have a gene of the Steppe people, and they also adopted some words from the Sakas, who were the ancestors to the Turkic people. In this regard, I would like to share one interesting episode of my life. While waiting at the airport for boarding a flight, I saw how a Japanese Buddhist monk was located next to me, who, as it turned out, had been in Kazakhstan. We had a rather lively conversation, in which we also touched upon Buddhist themes. During the conversation, I talked about the “Golden Man” – a descendant of the Saka leader, whose grave was found in 1970 near the Kazakh city of Issyk. All his clothes, weapons, crown and jewellery were made of gold. This burial dates from the V-IV century BC. I noted that to date 5 such golden people have been found. Thus, the territory of Kazakhstan is the valley of the burial of Sakas Kings. In this context, I expressed the opinion that he and the Buddha may be close relations belonging to the same member of royal families of the Sakas, as the Buddha also came from a royal family. On the other hand, my interlocutor, dispelling all my doubts, replied: “in fact, it would be so.”

Undoubtedly, the Kushan King Kanishka remained one of the symbols of the Turkic culture in India. After his death comes to the slow decline of the dynasty, which nevertheless continued to exist for several centuries, but at the same time, losing its power, gradually.  Statues were erected in honor of Kanishka, in ancestral temples of Kushan. However, all the temples of that period, including one of the best works of Buddhist architecture– Kanishka Stupa, were subsequently destroyed by Muslim conquerors. The statue of the Kushan King Kanishka, made in full size, was also subjected to vandalism. From the injured monument only the lower part of the torso and legs were preserved. Therefore, we can judge not about the identity of the person depicted, but about the clothes worn by representatives of the highest class of the Kushan society. Remarkable is the fact that the appearance of Kanishka clearly resembles the steppe (Sakas) samples of a nomad horseman. Today, the historical bonds of Kazakhstan and India are in the focus of the Indian establishment attention as well.

In particular, the ex-Minister of Foreign Affairs of the Republic of India, Mrs Sushma Swaraj, in one of her articles noted that Buddhist monks travelled to China through Central Asia and founded Buddhism there. The carved images of the Buddha, the most prominent Buddhist teachers and Sanskrit Shlokas (ancient Indian Sanskrit epic) in Tamgaly-Tasin Almaty region testify to the rich cultural contacts between the two countries. Thus, she shares the view that Sakas and Kushans came to India from this region. In general, Central Asia and India, the two great centres of civilization interacted for more than 2,000 years, mutually enriching each other culturally. Thus, in different periods Huns came to the Indian lands (mid-5thcentury,) and Delhi Sultanate existed on the territory of modern India (XIII-XVI cc.) and the Mughal Empire (XVI-XIX cc.,) during whose reigns, the Turks participated.

The interaction of these cultures is vividly illustrated by the example of the emergence within the Kushan Empire of a particular style in the visual arts, called Kushan. The sculpture was the highest artistic achievement of the Kushans. The carved images of the Buddha, the most prominent Buddhist teachers and Sanskrit Shlokas (ancient Indian Sanskrit epic) in Tamgaly-Tas in Almaty region testify to the rich cultural contacts between the two countries. Statues were erected in honour of Kanishka, in ancestral temples of Kushan. However, all the temples of that period, including one of the best works of Buddhist architecture – Kanishka Stupa, were subsequently destroyed by Muslim conquerors. The idea of a new religion was extremely simple and clear: do good and the world will become kind to you. People, having understood this simple truth, accepted it. Not all nations had similar wisdom.

Author is Bulat Sarsenbayev, Ambassador-at-large, MFA of Kazakhstan, Ex-Ambassador of Kazakhstan to India, 2014-2019, PhD in History.