Since 2014, Kazakhstan has received assistance from the EU as part of the regional cooperation that supports all five countries in Central Asia with a total budget of 245 million euros (US$275.4 million). Photo credit: Kazakh Ministry of Foreign Affairs

Borrell shared the plans of the European Commission to boost cooperation as part of a cohesive EU strategy with Central Asia which was adopted last summer. Included in the plan is an agenda focused on the promotion of sustainable Euro-Asian connectivity, border management, the management of water resources, climate change, the environment, and cooperation on security, counter-terrorism, and the fight against extremism.

Borell touched upon the EU’s plans to allocate three million euros (US$3.4 million) to Kazakhstan and Turkmenistan. Out of four million euros (US$4.5 million) in the budget of its so-called “Central Asia and Mongolia COVID-19 Crisis Response” (CAMCCR) project, one million euros (US$1.13 million) will be provided to Mongolia. The projects will be implemented by the World Health Organization (WHO) and the measures will focus on post-Сorona recovery and will provide expertise and training, as well as accompanying supplies and equipment for COVID-19 identification, case handling, and laboratories. The official decision, however, has yet to be made. 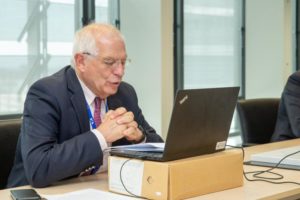 High Representative of the European Union for Foreign Affairs and Security Policy and Vice-President of the European Commission, Josep Borrell. Photo credit: EU Delegation to Kazakhstan

Along with that, the EU has mobilized 123 million euros (US$138.3 million) for Kyrgyzstan, Tajikistan, and Uzbekistan to support their health-related needs and social and economic recovery.

During the meeting, Minister Tileuberdi briefed his colleagues on the government’s work on supporting sustainable economic growth and social support for the country’s population amidst the state of the emergency that has been in effect in Kazakhstan since March 16 all the way through May 11 and the continued lockdown.

He also thanked the EU for the support rendered to victims of the April floods in the Maktaaral district in the Turkestan Region in southern Kazakhstan.

The ministers are expected to meet again at the next round of the EU-Central Asia High-level Political and Security Dialogue and at the 16th EU-Central Asia Ministerial Meeting slated to take place before the end of 2020 in Brussels.