NUR-SULTAN – Whether it is the effect of the pandemic or the early arrival of warm weather, one can see more people cycling on the streets of Nur-Sultan and people flocking to bike stores to join in the new trend. One thing is clear – the rising popularity of sports culture is definitely a good trend in any country. 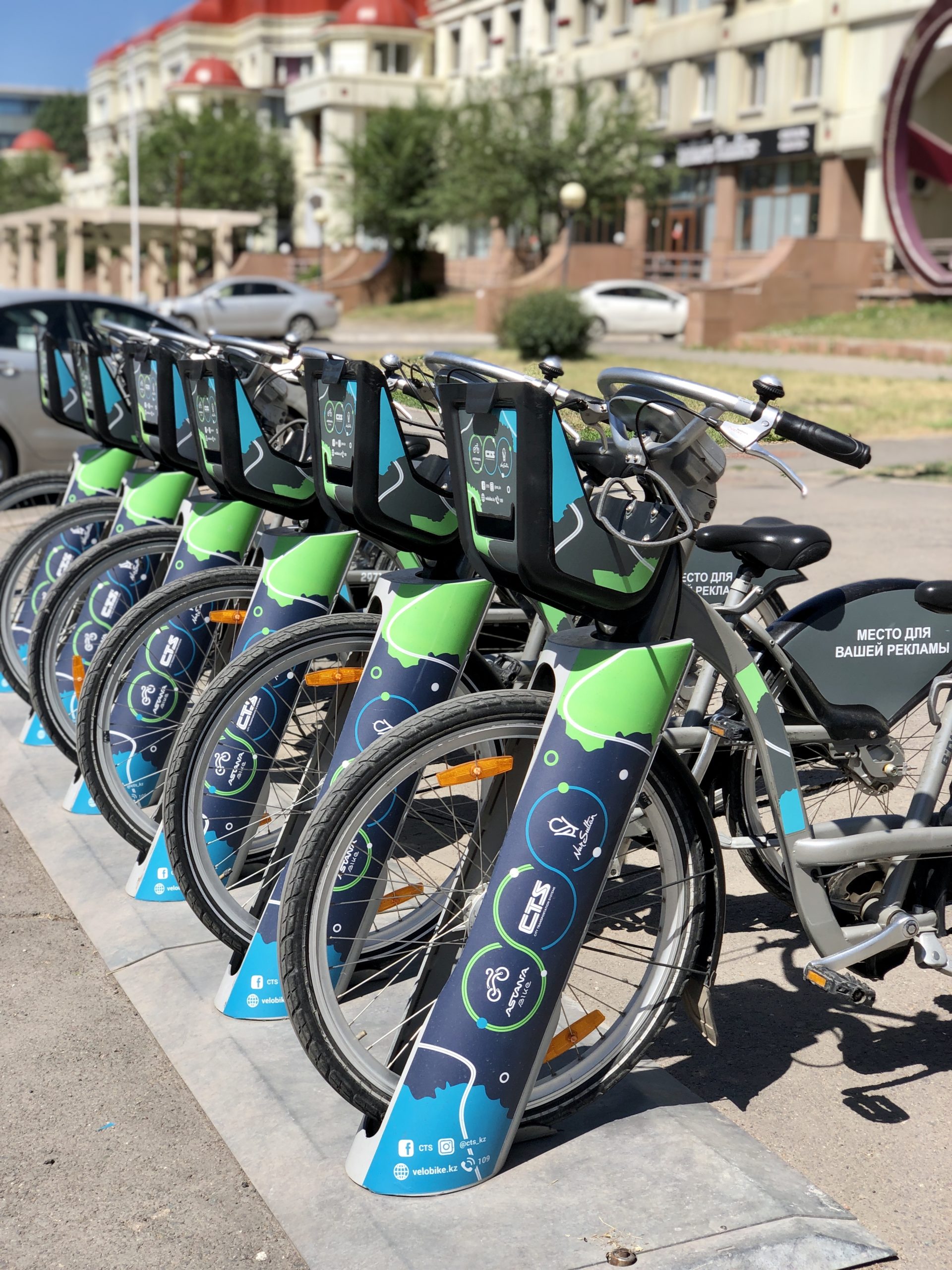 The Kazakh capital has become more bike-friendly in recent years, with more bike lanes across the city as well as different ways to get a bike. Photo credit: Assel Satubaldina

If ten years ago, the capital did not have enough of essential bike infrastructure, in the past few years, the city has put tremendous effort into enabling city residents to enjoy a pleasant ride across many newly-built bike lanes in the city. The Nur-Sultan Akimat (city administration) plans to build 140 kilometers of bike lanes in the next three years, with 40 kilometers planned for 2020. 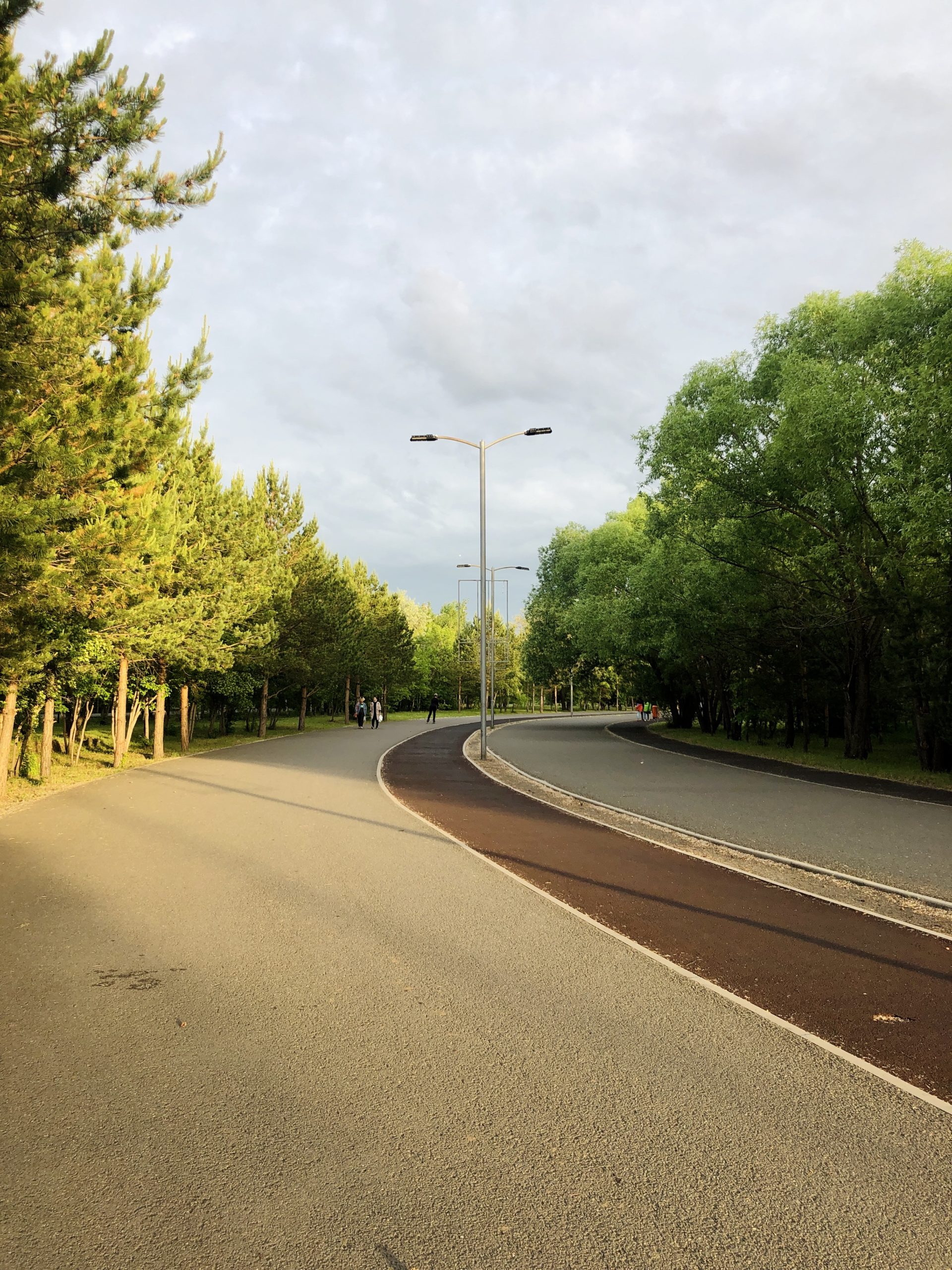 Used as a ski run in winter, the Central Park is a favorite spot among locals, often packed with people from the early morning till midnight. Photo credit: Assel Satubaldina

The cycling community has also been growing in the capital uniting people with a passion for cycling. VeloTop is one of the biggest bike groups in the capital founded by Yuriy Bezborodov back in 2011 to connect bike lovers.

“The initial goal of our group was to gather the pictures we take during our rides in one place, so as not to lose them. A small community of bike riders emerged out of this and that is why we came up with the idea to set up a group where people can find each other,” said Bezborodov in an interview for the story.

For Bezborodov himself, it also started in 2011.

“You know there is a time when parents buy you a bike when you are a kid, then you switch to motorbike, then to a car, but then you switch back to a bike. I just felt it was time. I realized then that it was a completely unfamiliar world to me, I did not know where to buy spare parts and did not understand how to maintain a bike. I decided that the problem needs to be solved, and in a simple way,” he said. 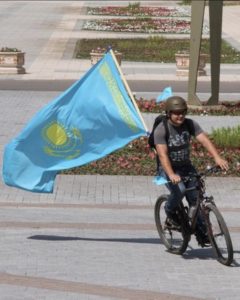 The group currently has 2,200 participants, and more than half of them are active bike users. It is also a place to share useful tips on where to buy bikes, where to have them repaired, and many other things about bikes, but also much more.

Bezborodov, who rides a bike daily, noted that the capital witnessed significant improvements in bike infrastructure over the past nine years, including new bike lanes across the city.

“If five or six years ago, I did not understand the need for bike lanes, and was saying that there were too few of us to start building them, now I understand I was wrong. Bike lanes are important in the development of cycling infrastructure and to encourage cycling in general, because it is a safe means of transport, and safe conditions need to be in place,” he said.

In terms of the development of the cycling infrastructure, he believes there is a need for bike highways that would connect the right and left bank of the city not only through the Yessil River embankment.

The pandemic, he noted, encouraged many to switch to bikes. Some of the city’s biggest bike stores had many people waiting in line outside the store.

“When the coronavirus started to recede, a huge number of my acquaintances started to ask me where to buy a bike, how to choose it and etc. People became actively involved in this topic, including those who previously had no interest in it whatsoever. One drawback is that bikes soared in price, but that was also because of the weaker tenge. If last year you could buy a bike for 150,000 tenge (US$375), now it would cost you 250,000 tenge (US$625),” he said.

He also called bike riders out to take greater caution while riding, both along bike lanes and along roads, and wear protective equipment.

Having a bike of your own may not be the only option. The city’s first automated bike rental system, launched in 2014 and meant to follow the example of countries with well-developed cycling infrastructure, is very popular among locals for its affordability.

The season extends from the end of April to October. This year it launched May 13 and is expected to last through mid-fall. 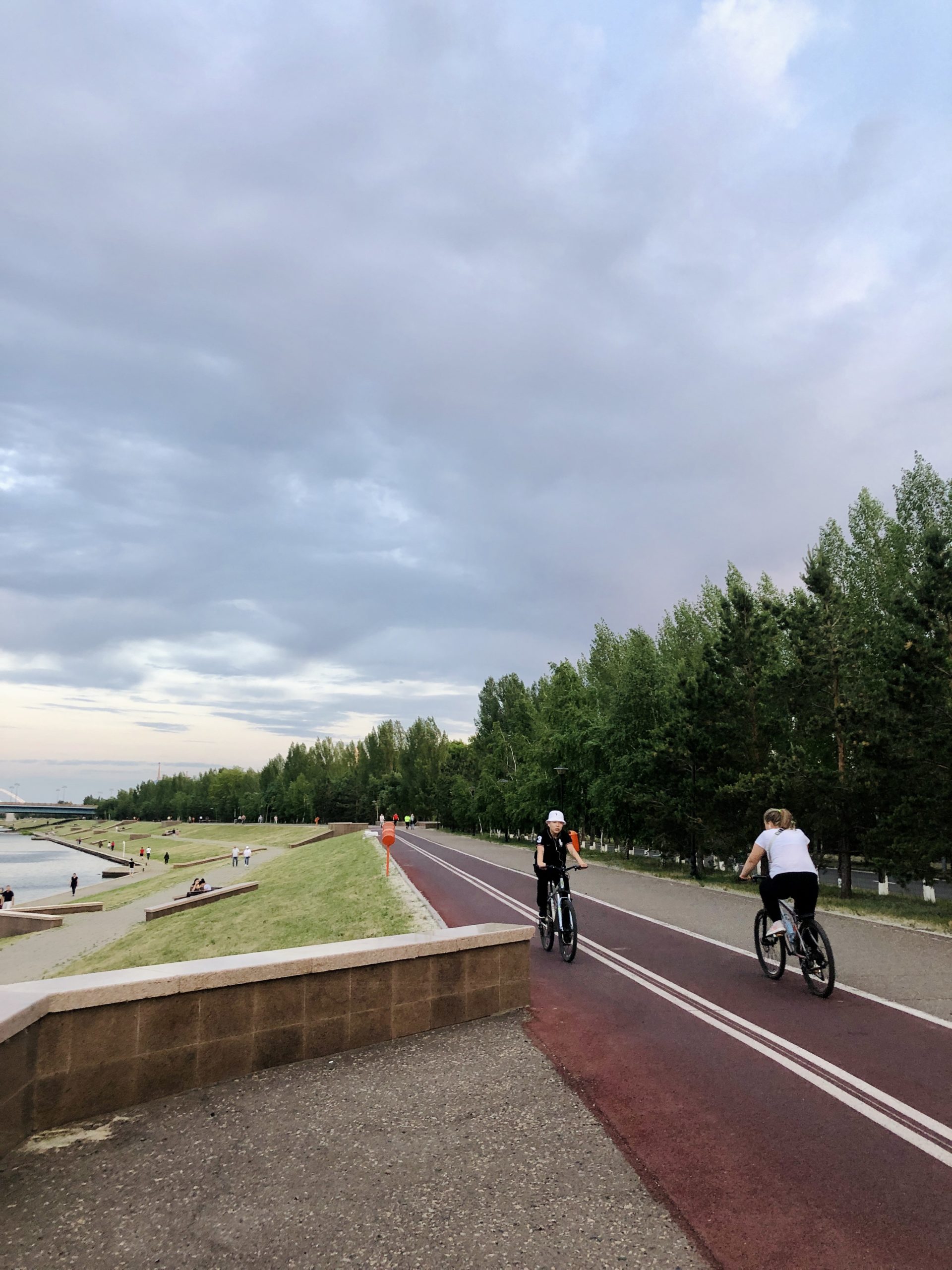 A bike lane connects the right and left bank of Nur-Sultan city along the beautiful embankment of the Yessil River. Photo credit: Assel Satubaldina

Affordable prices and availability of rental points across the city are among the factors that encourage people to register in the system. Monthly subscription will cost 2,500 tenge (US$6.25), quarterly 3,500 tenge (US$8.7) and seasonally 10,000 tenge (US$25).

With the first half-hour free, users who take bikes from one station to another in fewer than 30 minutes can ride without paying anything. Smartphone applications show bicycle station locations and real-time availability.

“As of now, the number of active users is 1,773 people. There are 150 stations and they are in all districts of the city meeting the needs of the population. The number of bikes is 700,  but the number will increase depending on the demand,” Nikolai Astipov, parking space management director at the City Transportation Service, the company managing the system, told The Astana Times.

The system users can locate available bikes at the bike stations via the mobile app or the website.

To use the bikes, one registers at velobike.kz by filling their personal information and contacts, submitting personal identification documents, and chooses a plan. The whole process can be completed online. Discounts are available for students, pensioners, and people with disabilities.

Previously, the system required a card to rent a bike, but now the system is going fully digital requiring only an ID number and password. The company is also conducting an analysis of the needs of the population and feedback to plan further steps for development.