By Aidana Yergaliyeva in Society on 28 May 2020

The Kazakh documentary film “Overcoming Barriers”  premiered on Feb.12 and has qualified to participate in three prestigious international film festivals, according to Kazakhfilm studio. The film stars Absent, a thoroughbred Turkemen Akhal-Teke stallion, a horse that became a legend in equestrian sports during the Soviet era. The movie explores the sport’s role in Kazakhstan’s culture and history. 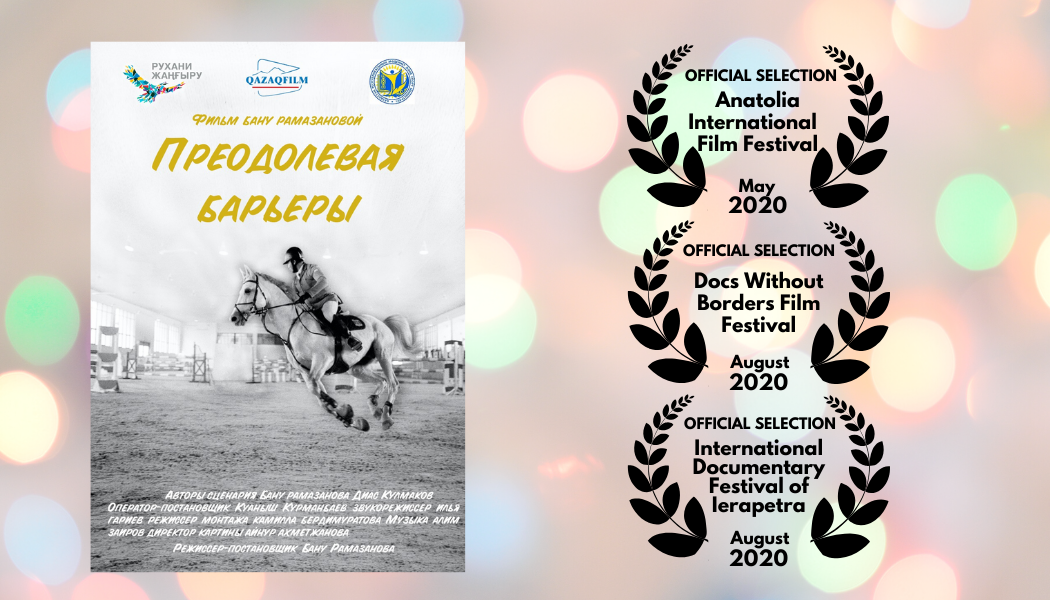 The poster of the Kazakh documentary film “Overcoming Barriers” and the list of the international film festivals to which the film crew received an invitation. Photo credit: Kazakhfilm Studios press service.

The role of the horse was of paramount importance in Kazakh nomadic culture. An old proverb said that “A lion is the king of wild animals, a horse is the king of domestic animals.” For nomadic Kazakhs, horses were their means of transport, loyal friends, indicators of wealth and status, even sacred animals with healing powers.

Absent was born at the Lugovsky stud farm near Dzhambul in 1952. The horse began to train in dressage in 1955 at the Almaty equestrian school.

Riding Absent, Sergey Filatov became the first Soviet sportsman to win a Grand Prix at the Olympic Games in Rome in 1960. Filatov won the Grand Prix of five Soviet championships in a row from 1959 to 1963 and took second place at the pre-Olympic qualifying competitions in St. Gallen.

“Overcoming Barriers” is the second film directed by the young and ambitious Banu Ramazanova, a graduate of the New York Film Academy. Her first work is a short film “Zher Ana (Mother)” that was also well received and presented in Kazakhstan’s pavilion among other short films at the Cannes Film Festival in 2016.

“The film ‘Overcoming Barriers’ occupies a special place in my heart,” said Ramazanova. “Because, thanks to the picture, which we worked on for almost a year, I met amazing people – our movie heroes. We saw everything that happened to them: how they selected the horse, how they worried when the horses got sick, how they prepared for the stage of the World Cup in Kazakhstan, which has not been held for more than four years, and how they rejoiced at their achievements.”

The chances of showcasing her film in three international festivals was yet another barrier that Ramazanova and her team had to overcome during the pandemic.

“Today, we all, like the heroes in our film, have to work to overcome barriers in connection with the spread of coronavirus. COVID-19 has created obstacles in all sectors and in the film industry in particular. Many of the festivals where we submitted our film earlier were postponed due to the pandemic. Nevertheless, we were able to jump over this barrier – we entered the main competition of festivals. Gradually, we are returning to normal and we will emerge as winners,” she said.

“Overriding barriers” will start its tour on May 30-31 in the main competition of the new Anatolia International Film Festival in Istanbul, Turkey. The Turkish festival nominated the documentary in three categories: Best Documentary, Best Original Music and Best Director. The Anatolia International Film Festival serves as a venue to connect creators of short, full-length feature films and documentaries twice a year.

The 7th International Documentary Film Festival in Ierapetra will also present the film in its main competition program during the festival week, Aug. 1-7, in Greece. It is an open air festival dedicated to documentaries around the world and promoting the genre as a leading art form. It supports the works of young and independent filmmakers. The seventh show will be dedicated to research and innovation.

The film’s third chance to catch a big break will be in the main competition in the Docs Without Borders Film Festival, one of the largest American documentary film festivals scheduled for Aug. 23-30.