By Aidana Yergaliyeva in Nation on 14 January 2020

NUR-SULTAN – Bitfury, the world’s leading blockchain company, in partnership with the United Nations Development Programme (UNDP) will be the first big business to compensate for its carbon footprint in Kazakhstan. The two entities will sign an agreement in late January with the nation’s Ministry of Ecology, Geology and Natural Resources to create a forestland in the Pavlodar Region.

Kazakhstan must reduce its greenhouse gas emissions by 15 percent in the next decade to meet its pledge in the 2016 Paris Agreement.

The agreement and UN Sustainable Development Goals indicate moving towards sustainable and low carbon consumption will require significant investment and innovation from both the government and private sector. UNDP in Kazakhstan and Bitfury agreed Dec. 12 to conserve and increase the nation’s forestland.

“This is the first carbon reduction initiative for Kazakhstan and we hope that it will accelerate the country’s efforts to reduce carbon dioxide in partnership with the private sector. These practical solutions will require institutionalisation and expansion,” said Yakup Beris, UNDP Resident Representative in Kazakhstan, reported the UNDP press service. 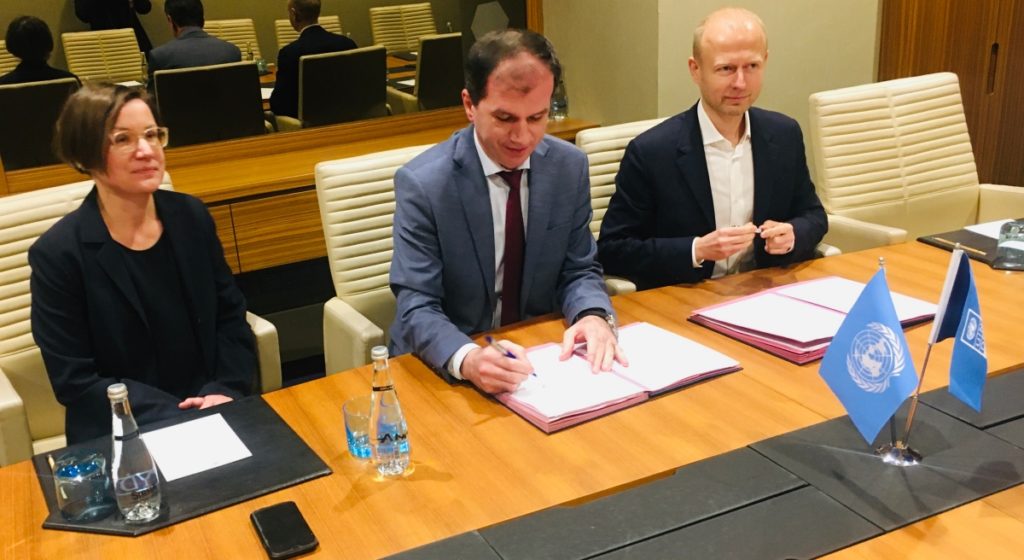 Kazakhstan currently legally owns 29 million hectares of forest. Most of the land, however, is threatened by illegal logging, forest fires and land-use change. While these 29 million hectares of land is somehow protected, there are forest lands that “are not included in the state forest fund,” BIOFIN Financial Mechanism Expert Meruyert Sarsembayeva told The Astana Times.

“We will work with the forests that are not being considered and managed. It is exactly these forests that are threatened by the forest fires and illnesses. If they are not legitimised and transferred to the state forest fund, it may lead to that, they will produce even more emission,” she said.

The initiative envisions creating forestland in the region to compensate for Bitfury’s carbon footprint. The company will start with 20 hectares.

The project will start by creating cartographic materials of unaccounted (ownerless) forests and purchasing firefighting equipment. The parties will determine the span of its emission compensation “after the exact area and composition (species, age) of unaccounted forests is determined by the methodology that is currently under consideration by the Ministry of Ecology,” she said.

The involvement of the Kazakh government and local authorities is a must as “its implementation requires a change in the legal status in forest areas,” she added.

“We fully support the UNDP sustainable development goals aimed at protecting our planet and are inspired by Kazakhstan’s initiative to create mechanisms to reduce greenhouse gas emissions,” said Bitfury CEO and co-founder Valery Vavilov, according to the press service.

UNDP will act as “a focal point, providing experience and assistance to the above parties in a collaborative effort,” Sarsembayeva added.

The project is part of the Biodiversity Financing Initiative (BIOFIN), which will also assist in improving forest management practices through Kazakh legislation and by raising public awareness on the ways to reduce emissions. BIOFIN helps countries around the world measure their biodiversity spending, assess the funding needed to achieve their goals and make recommendations on how to raise money from various sources.

“Further expansion of the project’s experience provides an opportunity for wider participation of local and international organisations with a large carbon footprint in projects of a similar nature and reduction of greenhouse gas emissions,” she said.

Kazakhstan has set the goal to receive 50 percent of its energy from alternative and renewable sources by 2050. With UN support, the country has reduced the annual energy consumption to heat pilot residential buildings by 25-45 percent in the past five years.