By Aidana Yergaliyeva in International on 25 January 2020

NUR-SULTAN – Kazakh President Kassym-Jomart Tokayev’s first visit to the United Arab Emirates, which is also his first visit to the Middle East as head of state, will boost cooperation between the countries, Kazakh Ambassador to the U.A.E. Madiyar Menilbekov tells The Astana Times. 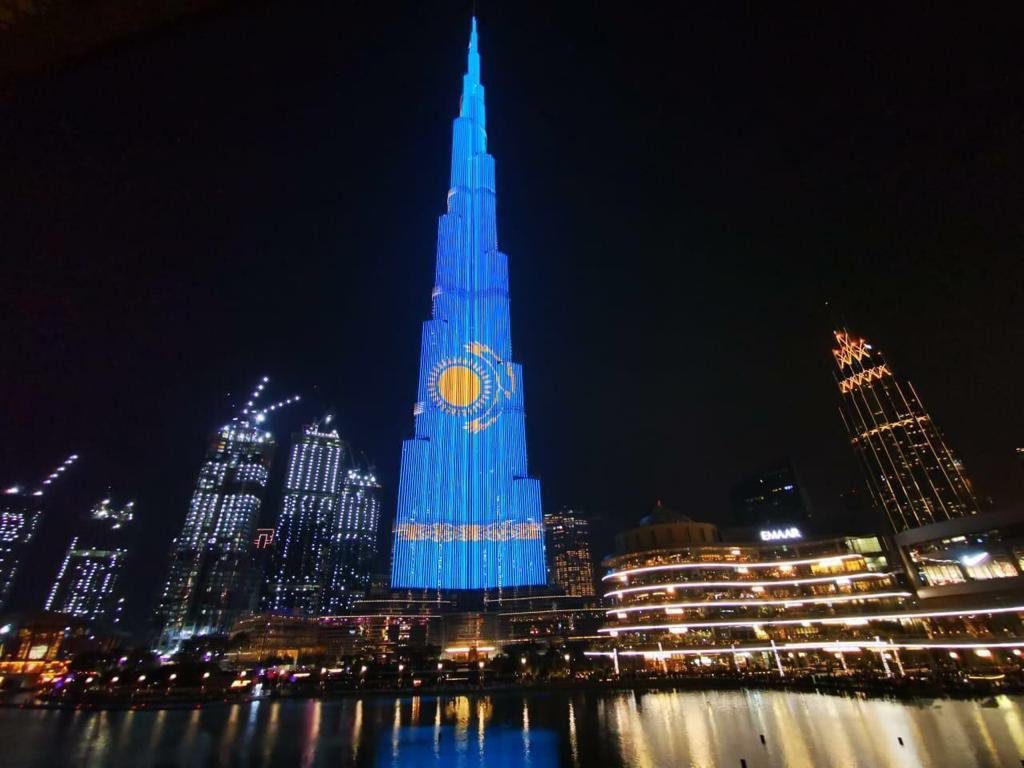 The Burj Khalifa light up with Kazakh flag Dec. 16, the national day of Kazakhstan.

The visit, scheduled for late January, “will allow the discussion of the current state of bilateral relations and will give impetus to the development of mutually beneficial cooperation in all areas between the two fraternal countries,” he said.

Kazakhstan and the U.A.E. have a history of more than 27 years of diplomatic relations. During those years, “tremendous work has been done to develop trade, economic and investment partnerships and expand cultural and humanitarian ties,” Menilbekov said.

According to him, there is “huge unaccomplished potential and prospects for further expansion of bilateral cooperation in completely new sectors of the economy.”

This can be seen from “the steps taken by the two states to introduce the latest technologies, to develop digitisation while entering the era of the Fourth Industrial Revolution,” he said.

“The United Arab Emirates intends to develop mutually beneficial and long-term cooperation with Kazakhstan. Appropriate conditions have been created for this,” he said.

Cooperation with the resource-rich U.A.E. should benefit Kazakhstan, as the Emirates are also known as a “rapidly developing modern tourist, transport, logistics and production hub in the Middle East, which has taken an active course towards diversifying its economy along with the introduction of the latest technologies,” the envoy said. “The U.A.E. supports Kazakhstan’s ongoing domestic and foreign policy with its peaceful initiatives,” he said.

The U.A.E. is a member of the Conference on Interaction and Confidence-Building Measures in Asia (CICA) and regularly sends representatives to the triennial Congress of Leaders of World and Traditional Religions, both Kazakh initiatives. Also, the Emirates have supported Kazakhstan’s initiative to establish the Islamic Food Security Organisation (IFSO) under the Organisation of Islamic Cooperation.

“Abu Dhabi, like Nur-Sultan, has always advocated respect for the basic principles of interstate relations, such as non-interference in the internal affairs of other states, respect for territorial integrity and sovereignty. Moreover, Kazakhstan has no disagreements with the United Arab Emirates on any issues. Our views on topical issues on the international agenda often coincide,” he said.

In addition, the two countries have a lot of cultural similarities that might ease the negotiation and cooperation processes.

“[T]he nomadic way of life that our ancestors led over the centuries, common spiritual, cultural, national values and much more serve as a bridge connecting the two peoples,” he said.

In honour of Tokayev’s visit and Kazakh poet and thinker Abai Kunanbayev’s 175th anniversary, Abu Dhabi’s Manarat al-Saadiyat Cultural Centre will present Kazakhfilm’s “Kunanbai” and “Abai” feature films. In addition, as part of the Days of Kazakh Cinema in the U.A.E., the city will also run the films “Kazakh Khanate. Golden Throne” and “The Leader’s Way.”

Dubai will host EXPO 2020 in December, which “will bring together a record number of participating countries from around the world,” Menilbekov noted. Kazakhstan and 191 countries have confirmed their participation, and work on the Kazakh pavilion has begun. Kazakhstan will also celebrate its national day with the participation of a high-level delegation during the exhibition.

Nazarbayev “played a key role both in the formation of modern Kazakhstan with its active, balanced foreign policy, and in establishing and creating a solid base for bilateral relations with the countries of the Arab world,” the envoy said. “Even then, many observers saw the amazing closeness of the views and ideas of Nursultan Nazarbayev and Sheikh Zayed, their willingness and desire to actively develop bilateral contacts.”

Over the following years, Nazarbayev also met with the current Emirati president, the vice president, the prime minister, the ruler of Dubai and the crown prince of Abu Dhabi.

“As a witness to all those meetings over the past 12 years, which took place in a very friendly atmosphere, I can say that it was always easy for the leaders of the two countries to find a ‘common language,’” he said.

“Since then, the economic, investment and investment partnership, based on mutual respect and an understanding of the priorities and interests of the two countries, has been the locomotive of Kazakh-Emirati relations. Thanks to the signed Agreement on the Encouragement and Reciprocal Protection of Investments, long-term stability for investors is ensured,” he added.

To date, Kazakhstan and the U.A.E. have “a solid legal base, which consists of more than 100 documents regulating almost all areas of bilateral cooperation,” he said. “The main ones are agreements on trade and economic cooperation, on the promotion and mutual protection of investments, on avoidance of double taxation, on the transfer of convicted persons and on assistance in civil and commercial matters.”

The U.A.E.’s investments in the Kazakh economy have exceeded $2.1 billion.

The countries are currently working together to build the Abu Dhabi Plaza multifunctional complex in Nur-Sultan, which will be the tallest building in Central Asia and a “symbol of the strong friendship between the peoples of Kazakhstan and the U.A.E.” The building, worth $1.2 billion, is scheduled to be completed in July.

“The United Arab Emirates remains the main and most attractive destination for investment in the region. However, the Emirates, having huge capital, actively invest abroad. Amid the rapidly changing security situation in the region, the Emirates remain a kind of ‘island of stability’ in the midst of a stormy sea of ​​modern challenges and threats in the Middle East,” the envoy said.

In addition, from March 10, 2018, the countries eliminated the need for visas for stays of 30 days or fewer and doubled tourist flow to Kazakhstan and increased business activities.