NUR-SULTAN – The Aleph Jewish Ethno Cultural Centre organised a celebration of Hanukkah, the eight-day festival of renovation and light, Dec. 29 in Friendship House. The centre was kind enough to invite a reporter from The Astana Times to talk about the holiday and community. 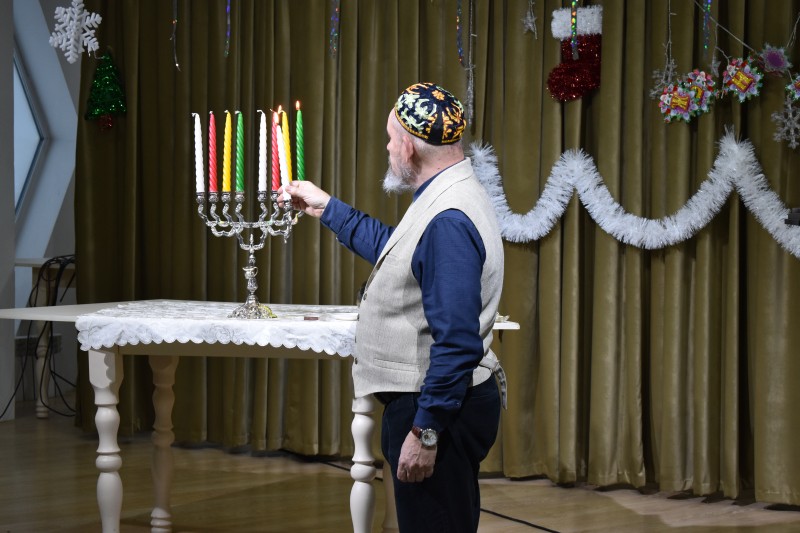 The main event was lighting the candles representing each day of Hanukkah.

“This is the light from heaven that comes into our lives. In every generation, every person receives this light. The light of love, joy, happiness, kindness, mercy – all that our fathers taught us. Let it spread it among us, our friends, guests and our country,” said centre Deputy Chair Nikolai Gorbunov.

As those assembled chanted “a great miracle happened here,” Gorbunov illuminated the candles one by one, for each day of the holiday. Hanukkah 2019 was celebrated from sundown, Dec. 22 to sundown, Dec. 30 and Dec. 29 marked the beginning of the last and most important day. The actual dates differ each year, as the Festival of Lights aligns with the Jewish calendar, which denotes years by the sun and months by the moon.

Gorbunov recounted the Hanukkah story. More than 2,180 years ago, Judea became part of the Seleucid Empire of Syria. Its ruler Antiochus IV Epiphanes invaded Judea, outlawed Judaism and destroyed the Second Temple (a holy temple for Jews, located on a mountain). Antiochus ordered erecting a statue of Zeus on the site and sacrificing a pig (an unclean, non-Kosher animal). This provoked a rebellion, which drove Antiochus and his army from Judea.

In celebration, one of the rebellion’s leaders ordered cleansing the Second Temple, building a new altar and lighting a menorah (or Hanukkah), a candlestick with eight candles. To do so, they needed to add clean oil with balms and dried herbs, which required seven days to dissolve, yet everything has been destroyed.

One of the warriors found a small, hidden jug with prepared and sealed oil, but it contained only enough for one day. The oil continued to burn for eight days until the next solution was ready and the miracle became the celebration of renovation and light.

Members of other centres visited and congratulated the Jewish community. 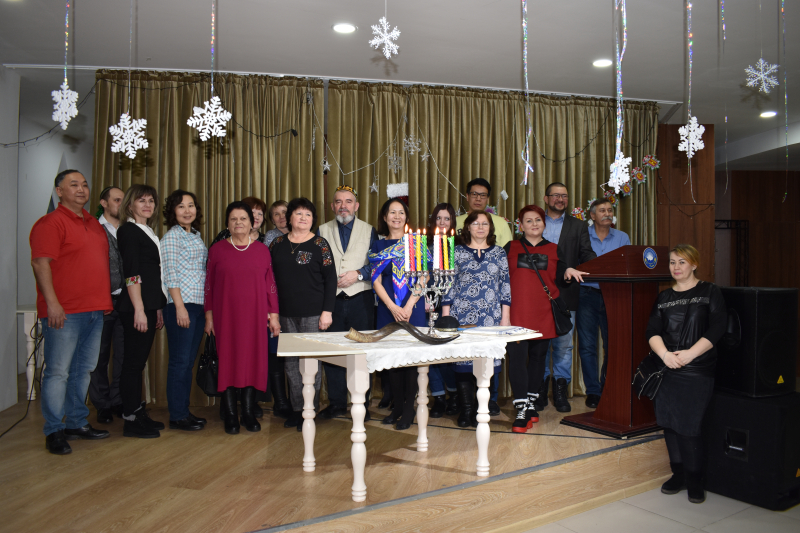 “May this celebration of light and renovation bring everyone something new, renew something good in us. It is good that we have the (Friendship) House. Finally, we have a house where we can celebrate. So much space, a good, warm house, it is very important,” said Chair Oksana Richter.

The table was full of treats made by community members. Sufganiyot, similar to a jelly donut, and latkes, potato pancakes fried in oil to commemorate the oil that burned for eight days, are the traditional foods of the holiday.

Attendees were entertained by songs in Hebrew and a musical duo of violin and accordion. The two often perform their varying repertoire at Jewish and the Assembly of the People of Kazakhstan events.

“Last year, we celebrated Hanukkah here (in Friendship House). We took Kazakh, Tatar and Kurdish music and everybody, including other ethno-cultural centres, danced. What is good about the Assembly of the People of Kazakhstan is it united us so much we stick up for each other. All the stereotypes about other people are totally eliminated,” said Gorbunov.

In addition to serving as deputy chair, he teaches free Hebrew classes on Sundays, professes Judaism and teaches the Torah.

The majority of Kazakh Jews came to the country during Soviet Union days, to “Raise Tselina,” to develop a new region. Others arrived during World War II.

“Many are grateful to the Kazakh people for their help during resettlement. People lived poorly, but still shared a piece of bread. One of the Greek centre representatives said that this is why Kazakh bread is holy for us,” he noted.

The community centre, established in 1993 by a group of teachers and other culture workers, was one of the first to become part of the Assembly of the People of Kazakhstan. Aleph was chosen as the name, as it is the first letter of the Hebrew alphabet.

The centre works on voluntary basis, operating on donations and membership fees. It is open to all.

“We try to make the people that come here interested and comfortable. We try to create a home-like atmosphere,” said Gorbunov.

“We celebrate all Jewish holidays; we try to show a little of our culture. Any person, not only Jewish, can visit our cultural centre,” said participant Maksim Nikolaichuk.