By Aidana Yergaliyeva in Nation on 23 January 2020 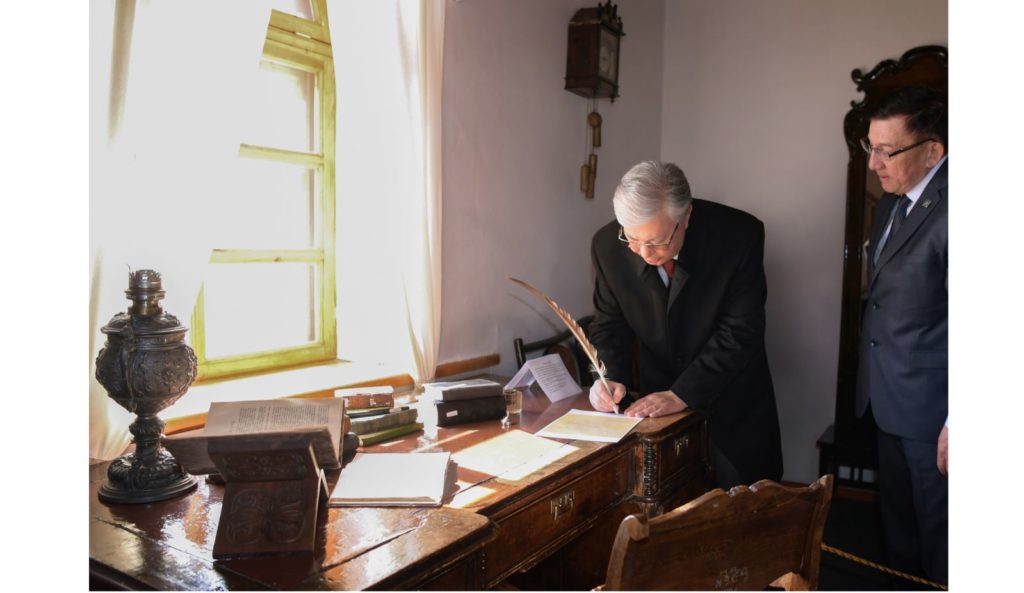 In the article, Tokayev shares his thoughts about the relevance of Abai’s ideas to the contemporary world and what people should still learn from them.

The article has four sections presenting Abai as a person who is exemplary to the national identity, who takes interest in the state affairs, has compassion for a new society and is a figure of world culture.

In the first section, Tokayev discusses how the thinker emphasises the importance of education and science.

“Looking at Abai’s works, we can see that he always wanted the country to advance and prosper and he praised this idea. And we know the progress is the basis of education and science. Abai wholeheartedly wanted Kazakhs to unstoppably continue studying.”

According to him, the law on the status of a teacher is a small step towards this greater idea.

“Teachers play a key role in raising educated and conscious offspring. It is our responsibility to respect a teacher. Therefore, the state should improve the status of a teaching profession and ensure conditions for their jobs.”

The knowledge of science should also be accompanied with speaking several languages, including the native language.

“In the new historical context, we all need to pay attention to the development and promotion of our native language and to enhance its status. In addition, learning English should be a priority. The more languages our youth will learn, the more opportunities they will have. However, they should be aware of their native language. The younger generation will bring only goodness to the country if they, as Abai said, will be fully knowledgeable in science, respect their own language and truly become polyglots.”

The President called on people to strive to be the intellectual nation in Abai’s understanding, which is self-aware, self-developing and prioritising education and science above all. According to him, Abai originated the term “intellectual nation.”

“The poet encouraged the people to master different kinds of art. He clearly knew that all of this was a matter of time, and he spoke to the nation earlier. Even the idea of forming an intellectual nation, which we are talking about today, can be argued from Abai. The great thinker, in every word, sought to grow the nation,” he said.

“In this regard, the word of Abai should become the guiding star of the generation,” he said.

In the second section, Tokayev stressed Kazakhs need to strengthen their statehood to grow and prosper. This entails the “importance of respecting the statehood for citizens, especially the youth,” just society and meritocracy.

“Abai’s principles are in line with the principles of a civilised state. Justice will be firmly established only if the rule of law, the openness of government and the accountability of the people are at a high level and civil society representatives are actively involved in the affairs of the state,” he said.

According to Tokayev, he proposed his “listening state” initiative to develop Abai’s main condition to just society.

“A constructive dialogue between government and society strengthens trust in the state. Government members, including ministers and akims (governors), must take into account the suggestions and wishes of citizens when making decisions on matters of state and social importance,” he said.

Tokayev said people with populist ideas “who think of change do not care about the future of the country” and should not mislead the citizens.

“Populism has gained a global character as a negative trend. Around the world, there is often the voices of groups who have no clear strategy and who seek power through bare slogans… Indeed, this is a dangerous process that undermines the development of any country and undermines the nation’s identity,” he said.

In the third section, the President stressed it is necessary to rethink Abai’s concept of a complete human, which corresponds to the concept of a man of integrity in English.

The characteristic describes only those who are very self-confident and striving for good, he said.

The President emphasised the poet valued hardworking people and called on  people to stop wasting their time on unimportant things.

“One of the themes at the heart of Abai’s work is the struggle with drunkenness. The poet constantly urges himself to be vigilant, not to worry about carelessness and laughter. He seeks to keep working through constant hard work. He propagandised to work hard, to seek knowledge,” Tokayev wrote.

Tokayev finalised the section signifying importance of learning a craft to earn for a living, instead of relying on livestock as the poet told in his thirty third Word of Wisdom.

“I think the ideas of the great poet are relevant for the society of Kazakhstan today. That is why today we mark getting rid of the psychology of addiction to raw materials and the maximum prosperity of small and medium businesses,” he said.

In the fourth section, Tokayev ponders on the idea that Kazakhstan can use Abai’s legacy to introduce Kazakh culture to the world.

“Over the years of my diplomatic service, I have often met politicians and experts in various fields. I exchanged views with foreigners on many common problems with humanity. In general, they are well aware of the political and economic achievements of Kazakhstan. (But they) are not well acquainted with our spiritual and cultural values. In this regard, the question arises: Why don’t we reveal Kazakh culture through Abai?” he said.

“Indeed, the works of a wise poet can enrich the spiritual life of not only the Kazakhs, but also the whole human race. Because the content of Abai’s works is full of universal values,” he said.