By Yelena Levkovich in International on 18 December 2019

NUR-SULTAN – Kazakh National Museum with the support of the United Nations opened Dec. 10 a diplomatic photo and video exhibit dedicated to Kazakhstan’s Independence Day and the museum’s fifth anniversary. 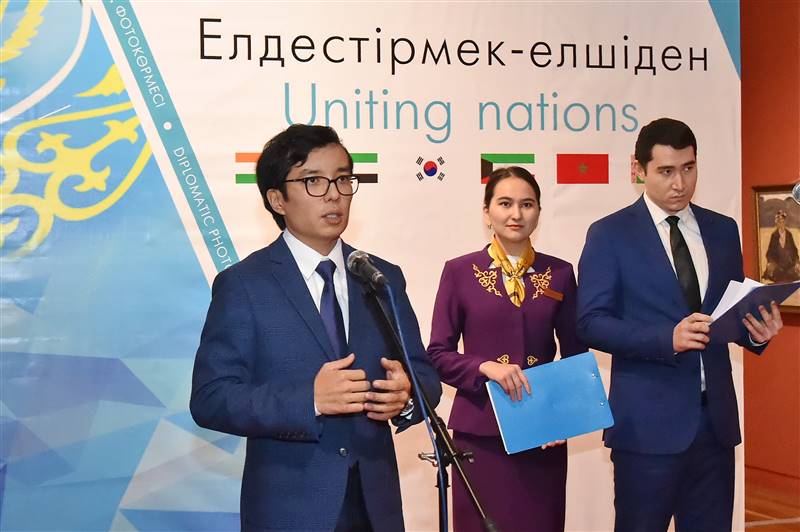 Diplomatic corps representatives, Kazakh deputies and others attending the opening ceremony applauded the more than 50 exhibits. The display features photographs of the most significant diplomatic meetings with China, France, India, Korea, Kuwait, Morocco and the United Arab Emirates.

“The title of the exhibition brings deep meaning, proving the proverb ‘Discord depends on mediator, truce depends on ambassador.’ The very ambassadors greatly affect the external connections and interrelations among countries. The presented photos and videos demonstrate not just the history, but politics, economic and cultural ties as well. We hope the exhibition attracts many people to introduce them to the diplomatic engagement history of Kazakhstan,” said museum deputy head Aibar Kassenalin.

The photographs, five in each section, as well as the videos of international events, have been provided by the participating countries. The series of photos showing First President Nursultan Nazarbayev and current President Kassym-Jomart Tokayev during their official visits and summits occupy a special place in the exhibition.

“Kazakhstan is perceived as a generator of stability, a unique model of prosperity and state growth. Our country has been recognised as the leader of the anti-nuclear movement and the proactive moderator of cultural, religious and civilisation dialogue. Kazakhstan contributes a lot in the global and regional challenges’ solutions, being an integral part of the processes. To date, the state has enhanced its cooperation with foreign countries in economic and informational spheres,” noted Museum Press Service Head Nurzhamal Samuratova.

The exhibit will continue for a month and organisers hope it becomes a documentary chronicle of Kazakh diplomacy development.

“All the countries including Kazakhstan have passed a challenging and interesting way of establishing their independence and statehood. These pictures and videos document the main stages of the states’ development. It is interesting to see so close and yet so far away years, which link us through the common deals with the name of the First President and Kazakh President Kassym-Jomart Tokayev,” said Belarussian Ambassador in Kazakhstan Anatoli Nichkassov.