By Nazira Kozhanova in International on 12 December 2019

NUR-SULTAN – Letter from Nur-Sultan, an event held Dec. 5 in the capital, focused on the regional dimension of the European Union (EU) Central Asia strategy and whether it is an adequate answer 21st-century challenges. 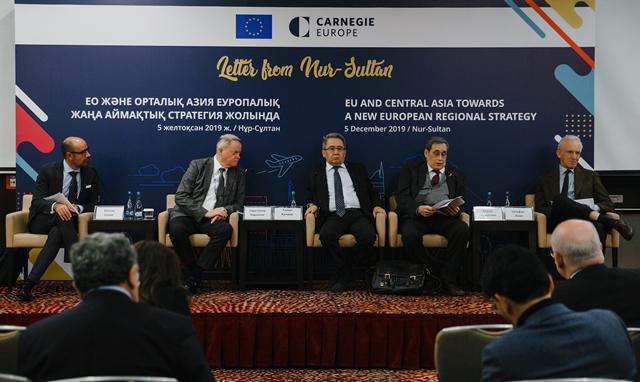 “The EU needs a more assertive strategy. This would entail shifting from a simple, general dialogue with the target country, based on ideas and principles, to a more meaningful dialogue based on explicit criteria for implementing those ideas and principles,” said Kazakhstan Institute for Strategic Studies chief research fellow Murat Laumulin in the event’s accompanying document.

“The EU should be lauded for successfully negotiating the Enhanced Partnership and Cooperation Agreement with Kazakhstan. What’s needed now by Brussels and Nur-Sultan is implementing it. The Central Asia strategy could also be made more flexible in terms of the projects and mandates that specific EU institutions in the recipient countries are authorised to accomplish. This game could be made more sophisticated by turning soft power – where Europe is stronger – into a geopolitical asset,” he added.

Carnegie Europe visiting scholar Dr. Stefan Lehne offered his expertise on the European region, noting a dynamic policy in Asia is impossible without a very strong policy in Central Asia.

“The EU already is a big player in this region, as it accounts for over 50 percent of foreign direct investment, which is quite a significant part, and I think 28 percent of trade. Central Asia is at the crossroads of not only East and West, but also potentially between North and South. You cannot really have a dynamic Asia policy without also a very strong policy in Central Asia. Now, I think the ambassador mentioned that these are supposed to be non-exclusive relationships… It’s more of a traditional use of a concept of soft power, in terms of regional cooperation with Central Asian countries, and it’s not exclusive in terms of being open for the participation of China, Russia, India and other countries,” he said.

The EU is aiming to become a reliable and committed partner for the region, remaining open for partnership with everyone, said Head of the EU Mission to Kazakhstan Ambassador Sven-Olov Carlsson.

“The EU’s partnership with the region is not directed against anyone. Kazakhstan and the other Central Asian countries appreciate our ability to engage on a non-exclusive basis without imposing binary choices. The EU does not aim to be a ‘great game’ player on a ‘grand chessboard,’ but rather a reliable and committed partner for the region. We remain open for cooperation and synergies with everyone, including China and Russia, based on full transparency and fully respecting the Central Asian states’ ownership and sovereignty,” he added.

The event was also attended by Austrian Ambassador to Kazakhstan Gerhard Sailler and Ministry of Foreign Affairs Foreign Policy Analysis and Forecasting Department Director Talgat Kaliyev, as well as Kazakh experts and representatives of the academic and diplomatic corps. The event was held following the adoption of the renewed EU Strategy for Central Asia in July, which outlines the way the EU and Central Asian countries can work closer on issues such as resilience, prosperity and regional cooperation.