By Zhanna Shayakhmetova in Business on 28 November 2019

ALMATY – Thirty-one agreements worth $2.3 billion were signed between governmental bodies and the business community Nov. 27 at Almaty Investment Forum 2019. 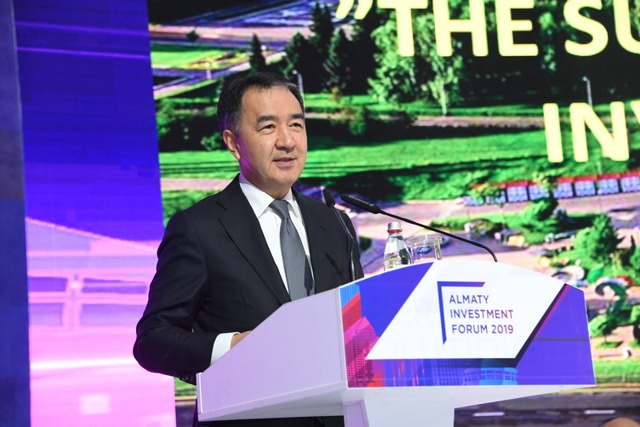 The major deals included an $11.3-million agreement on green city financing between the Almaty akimat (city administration) and European Bank for Reconstruction and Development (EBRD) and a memorandum of cooperation with the Astana International Financial Centre (AIFC).

The forum was held as the city is creating its development strategy for the next 30 years, said Akim (Mayor) Bakytzhan Sagintayev. The strategy through 2050, presented in open discussion with citizens, is designed for Almaty to enter the top 100 best cities in the world in terms of quality of life and business opportunities.

The city authorities have plans to modernise the urban infrastructure to improve the quality and comfort of life. The akimat adopted a special package of short and medium-term development plans primarily relating to a new Almaty including the metropolitan area and city outskirts. The design will solve the most urgent urban problems – water supply, lighting, landscaping and security and the infrastructure upgrades will open a new investment field in the next five years.

“We need a strong economy. The urban economy should develop at a rate of at least 5 percent per year. We began a structural reform of the urban economy to ensure this growth. We are focusing on the sectors of the new economy. This structural manoeuvre opens up fundamentally new fields for investment,” said Sagintayev.

The structural scheme will develop export production and expand the presence of Almaty manufacturers in the global high-tech economy. The growth will be polycentric and concentrated in several zones in different parts of the city.

Almaty boasts a favourable business and investment climate. The city ranks first among all Kazakh regions in the World Bank’s subnational rating for ease of doing business. In September, Fitch Rating assigned Almaty a BBB with Stable Outlook, which means a low level of risk for investment.

The city can be seen as a global business centre and major transport, logistics and tourist hub on the New Silk Road.

“We will develop areas that require knowledge and high qualifications, which are in demand in the regional and international markets. First, these include finance and insurance, information and communication technologies, logistics and distribution. Almaty has strong traditions, a first-class personnel school, high reputation and growth prospects. We will increase the share of these sectors in the economy and employment in the future,” Sagintayev said.

Construction is also an attractive investment, as the volume of housing commissioning has grown annually to more than two million square metres. Authorities will stimulate investment in the residential sector by offering a preferential rate both on mortgages and to install engineering infrastructure.

Social economy is also an important driver of economic growth. At least 19 schools, 16 outbuildings, 400 kindergartens and 30 medical institutions will be required in the next five years.

Almaty will develop according to the smart city concept and introduce the best smart practices in planning and development, housing and utilities, security, transport, education, healthcare and city management.

“Almaty has scientific and technical potential. Thirty-five percent of the country’s organisations in research and development are located here and 42 percent of all workers in research and development are employed here. I invite investors to participate in the accelerated formation of an effective innovation ecosystem of the city,” said Sagintayev.

Almaty is expected to develop as a cultural creative city, a centre of innovation and new knowledge economy industries. A creative economy is seen as the most promising investment industry.

The airline industry is growing rapidly and passenger traffic is increasing. Seven billion passengers currently use air services, a figure which will double by 2036.

“Airports are the places where foreign investors and foreign tourists get the first impression when they arrive and get the full impression when they leave. Airports are called showrooms of the cities… There are three players in the aviation industry. One is aircraft manufacturers like Airbus and Boeing; the other one is airlines like Turkish Airlines or Qatar Airways. The third one is airports and unfortunately, being mainly government-owned, the airports stay at the very back compared to other two players,” he added.

“There’s a global manufacturing recession out there. World trade is usually the main engine of growth. If you go back to the pre-financial crisis, world trade was growing at twice global GDP growth. Today, the trade volume is barely growing. This year it is estimated at 1.2 percent, less than half of the global GDP growth rate of around 3 percent,” he said.

“Kazakhstan has resources to support its reform programme, transformation programme. It has stability at a time when we have seen a lot of disruptions in many parts of the world. There’s a geopolitical recession. With such a vision, resources, strong team and talent, I think Almaty and Kazakhstan can [not only] attract talent, but also capital,” he added.

“Almaty has a highly educated population and [more] centres of higher education than many other countries. It is a tremendous opportunity for you to encourage the development of businesses related to your universities and hospitals, too,” he added.