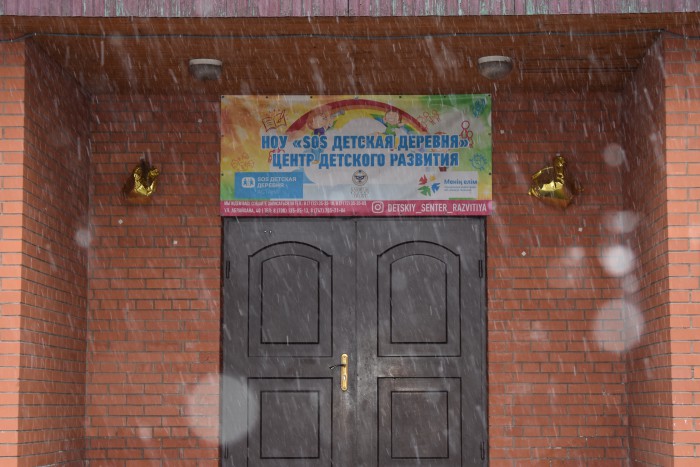 The front door of the SOS Children’s Village.

“The work on decreasing the number of orphaned children and making life of the current ones more comfortable will continue. We did not notice [how] the 25 years [flew by], but we can see the result of the decision to establish the villages,” said Raisa Sher, Advisor to the Kazakh Minister of Education and Science on the Protection of Children’s Rights during a press tour to the facility Nov. 4.

SOS Children’s Village Corporate Fund combines three villages in the capital, Almaty and Temirtau providing alternate foster care. The children, unlike youngsters in orphanages, are raised in families by specially trained SOS mothers. The local departments of education select children based on the capacity of the facility and the needs of the child and family.

Children live in separate houses in the village or sometimes an apartment in the city. Each family has four to six children and 10-12 families, or 50-70 children, reside in the village. The facility carefully chooses and trains women who become mothers and are helped by other professionals.

“The difference is that children socialise, they clean up houses with mums, go shopping, receive allowances, go to ordinary public schools and attend extracurricular activities,” she said. 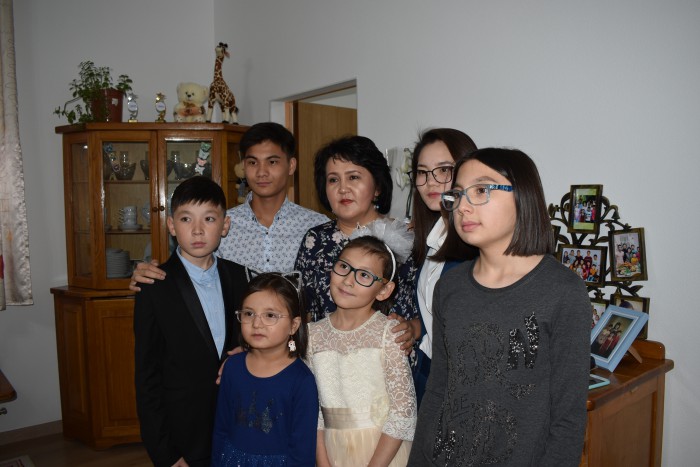 Hermann Gmeiner founded SOS Children’s Villages in 1949 when he realised many children were orphaned following World War II. Raised in Austria, he lost his mother as a boy and knew the hardships the youngsters would have to endure. Gmeiner devised the programme, presented it to the public and collected money to start the project. He wanted children to have families, unlike in orphanages, so they could feel love, respect and comfort. Today, Kinderdorf International has villages in 132 nations and is celebrating its 70th anniversary.

“SOS differs from other projects because it is not just a charity non-commercial organisation; it is a social project aimed at raising the quality of lives of children that were in a difficult situation. The ideals of the organisation state that every child has a right to grow in love, safety and respect. Kids here have the right to education and medical insurance. The main aim is for children that grow up in the village to be self-sufficient, confident and stress resistant young people useful in their society,” said Sher.

The Kazakh villages started in 1993, when Sara Nazarbayeva, the wife of First President Nursultan Nazarbayev, proposed the programme to the government. Kazakh SOS Children’s Village Fund opened the following year and she was named an honorary president.

In 1997, the first couple symbolically opened the first village in Almaty. At the time, such investments were impressive for the young nation.

Nazarbayeva researched the results and proposed a bill about the villages in Parliament which was passed and ratified in 2000. The concept was unique and the three private villages subsequently grew to 15.

When children turn 16 they enter the Youth Tutelage programme, which helps them develop the skills necessary for their adult lives. They move to Youth Houses (dormitories) where they remain until age 23, unlike orphanages, where the maximum age is 18. The Children Rights Committee proposed prolonging the stay in Youth Houses until 29.

“We, as mums and as leadership, are proud of the 207 children who have grown up here, 121 of whom succeeded in integrating into society, having their own families. Every fifth child has a university education,” said SOS Children’s Village Astana Director Zauresh Arystanova.

More than 30 children have families, which gives the village 46 grandchildren. The former residents bring their own youngsters to visit the village.

In September 2018, the Nursultan Nazarbayev Educational Fund became a village partner, with the government and Austrian organisation having an equal share in decision making. Following Kazakhstan’s example, other countries implemented a similar system and Children’s Villages will gradually replace orphanages.

“The most important thing is to take it slow; the wellbeing of children is most important,” said Mazhilis (lower chamber of Parliament) member and SOS Children’s Village Corporate Fund Board of Trustees member Serik Seidumanov.

“I visited orphanages and children there are different. Look into the eyes of our children; these are happy eyes, because they live in a happy, loving family. That is our formula,” he added.

Each of the three villages has Family Support Centres, which help, educate and guide both foster and biological parents who wish to have their children returned to them. During three years in the capital, the centre aided 86 families and 165 children. Samruk Kazyna Sovereign Wealth Fund subsidises the project that tries to reunite children with their biological parents by helping the adults financially and psychologically. This year, six children were returned to their families.

“We help families not only from the village, but also from the city; families in difficult situations. We do not give children anything extraordinary, we give them what they deserve – a family, care and opportunities to grow,” said SOS Children’s Village Sponsorship Coordinator Aigul Kussainova.

The centre also has a Foster Parent School for those who wish to become foster parents or who already have children in foster care. None of its foster parents has yet to return a child. 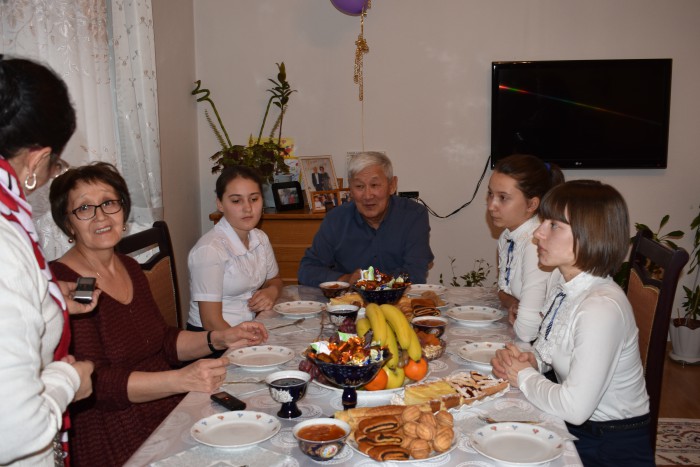 Seidakhmetovs and their foster children.

As a part of the tour, journalists met with two families. Zhanar Rakhimbayeva worked as a SOS mother for more than 20 years and had 12 foster children, some of whom already have their own children.

“My mum does not treat this [foster care] like a job; she does all that as a mum, with love. We are all here thanks to our mum, her effort. We are a very happy family; to be honest, we do everything together, we watch TV, play games. Everything is really cool,” said her daughter Indira.

In 2017, the village implemented a pilot programme of two-parent families, so children would have mothers and fathers. If a couple has successfully raised their own children, they are eligible to participate. The Seidakhmetovs decided to become involved and now have four foster children. The couple has been together for 38 years and has their own adult children who have their own families. They help their parents with their new siblings, visit them and take them for walks.