By Aidana Yergaliyeva in Culture on 4 November 2019 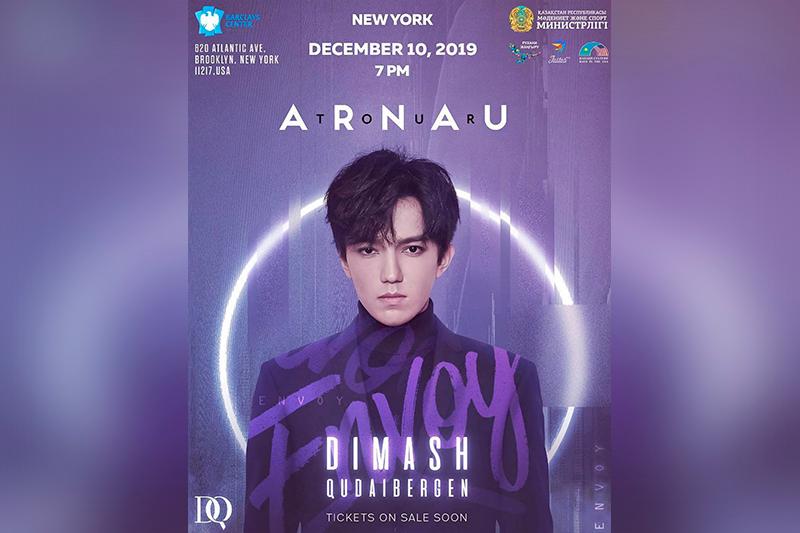 This time, Kudaibergen will gather his fans at the Barclays Centre arena with a 19,000-seat capacity. Concert ticket sales started Sept. 13.

The Arnau tour ENVOY will bring the best from the singer’s June 29 ARNAU concert programme in Nur-Sultan. “Arnau” is Kazakh for a dedication – meaning the concert will be about the artist’s dedication to his motherland.

The Kazakh Ministry of Culture and Sports is organising the event as part of the Kazakh Culture Days in the United States. The addition of ENVOY is, therefore, to signify the singer’s persona as an ambassador of Kazakh culture and music to the world.

“I am happy to demonstrate our culture to the world through the Arnau tour ENVOY show. Spectators of the concert in New York will be able to get acquainted with the original Kazakh art in a modern interpretation. That is what we are currently working on with our entire team,” said Kazakh singer Dimash Kudaibergen, reported inform.kz.

Also the ministry’s press service said that the motif of the new show will be the cosmic theme of the infinity of the universe. The show will feature both old hits and new songs created specifically for this programme. Kudaibergen will perform songs in Kazakh, English, Russian and Chinese.

In the Year of the Youth, the Ministry of Culture and Sports entrusted younger Kazakh professionals of an average age of 25 to organise the concert, the ministry said in a statement. Kudaibergen also praised the degree of their preparedness.

“I would like to note that everyone involved in this project is a true professional,” he said.

Kuanysh Beken and Arsen Imenov, for example, choreographed the dances of the Arnau tour ENVOY. This should make an interesting combination with Beken’s hip-hop and Imenov’s contemporary backgrounds.

Ten Kazakh dancers, including Dancing on TNT television project finalist Alexander Lee, will be at the concert. Lee also performed solo during the Arnau concert in Nur-Sultan.

The DQ band unique multi-instrumentalists will be in charge of music.

“The versatility of the professionals working on the creation of this space show is a reflection of the personality of Dimash – holistic and versatile. The organisers of the show are sure that the work of their team will be highly appreciated by the audience,” according to the ministry’s statement.

Many talented Kazakh youth also produced the promo video and posters to promote the show.

According to the ministry’s statement, in addition to Arnau tour ENVOY, the New York audience can also enjoy the performance of the Astana Ballet Theatre troupe.

Kudaibergen also prepares many shows in Russia. The next so will be Nov. 29 in St. Petersburg. Russian but it says will also have opportunity to see him in his February tour in Krasnodar, Kazan and Ekaterinburg.