By Nazira Kozhanova in Sports on 20 November 2019 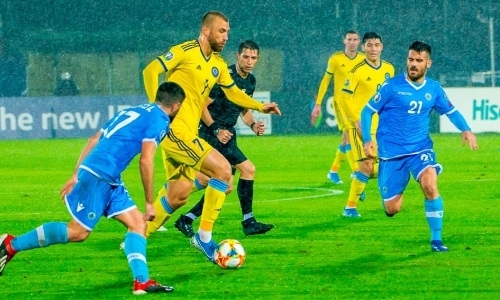 “First of all, I want to note the significance of this victory. The weather led to adjustments to the game by both teams. I liked how we played in the first half. We were able to score fast and, just as importantly, beautiful goals. In the second half, there was a certain decline, as a result of which the team did not score and conceded a goal into their own net,” said Kazakh team head coach Mikhail Bilek.

Despite the win, Schetkin noted the team will work on preventing opponents from scoring in the second half.

“I think that we played well in the first half. Scored three goals, constantly attacked. In the second half, we did not have the best game. Somewhere (we) relaxed, made mistakes. Missed a goal. In addition, we had few moments in the second half. We will analyse the game to play better in the future,” he said.

The team achieved its main goal of the game, said Bilek.

“He (Schetkin) told them that you need to play the same way as in the first half – actively, control the ball and score the goal if possible. At the end of the second half, I got a little hooked, but I note that the main goal – three points – was achieved. Some teams struggle there. The team from Scotland scored the second goal only at the end of the match. Therefore, it cannot be said that San Marino is a weak opponent,” said Bilek.

On Nov. 19, the Scottish team beat the Kazakh team 3-1 in a game that again began with the visitors scoring the first goal in the first half but then conceding the three in the second half, including one in the stoppage time. In March, in the first qualifying game of EURO 2020, Kazakhstan beat Scotland 3-0.