By Nazira Kozhanova in Business on 11 November 2019 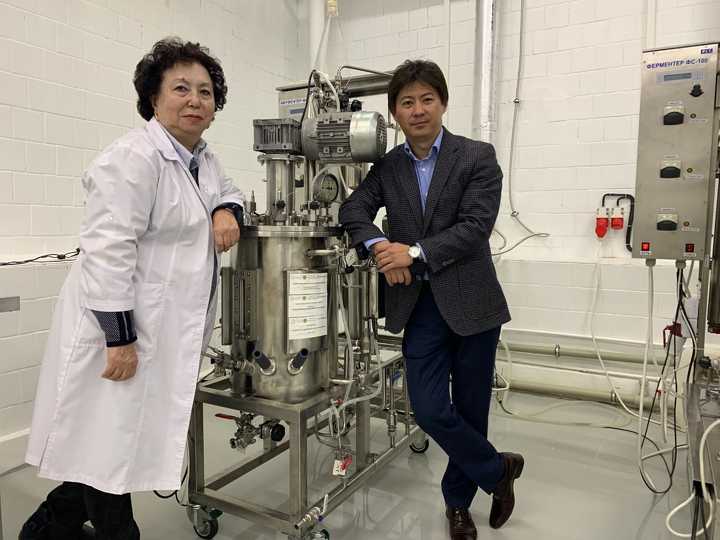 The product was developed by Kazakh National University Biology Department Chair Togzhan Mukasheva and her former student and current KazEcoSolutions Technical Director Olzhas Dyussenov. The Kazakh government and World Bank showed interest in the item and provided grants for its initial development.

“We have an oil-producing country and environmental pollution always occurs during oil production. This inspired Olzhas Dyusenov and me to start doing our research. Olzhas was my student and he researched oil-oxidising organisms. After completing his studies, he began working for an oil company, so he was seriously concerned about the environmental problems. He came to me and shared these thoughts. So, the idea of ​​creating a product for cleaning not only soils, but also soils, water and oil sludge was born. Thus, we won a grant from the government of the Republic of Kazakhstan and the World Bank to stimulate productive innovation,” Mukasheva told Forbes.kz.

The entrepreneurs see their product as a much-needed one and plan to first sell their batch in Kazakhstan. After additional study, they also hope to market it abroad.

“Near the oil there are always microorganisms that ‘eat’ it. We took contaminated soil samples and isolated those microorganisms that fed on best on oil. Growing them together, we created a drug that can be used to clean contaminated soil. The most important benefit for Kazakhstan will be seen in the future 5-10 years, when the cleaning of the soil from the oil will take place. Vapours will not pose a threat to human and plant health. Environmental restoration is regional in nature. Therefore, to date, we have not thought about entering the international market. I think when we have studied our product enough, we will begin to recommend it abroad,” she added.

Dyussenov noted what differentiates their products from its foreign competitors is its low price and high effectiveness. The production scale is also larger.

The technological line is set to produce the compound, he added. He sees the current results showing early signs of success, as the entrepreneurs signed contracts for product sales that exceeded half of their grant sum.

“Today, I evaluate the results of the project as excellent. As planned, we created a technological line for the production of the drug. Without the support of the World Bank and the government, all this would simply not have been possible. I think that we are among the successful projects because the amount of signed contracts already exceeds half the amount of the grant – this is an indicator of the level of commercialisation,” he added.