By Nazira Kozhanova in Sports on 18 October 2019 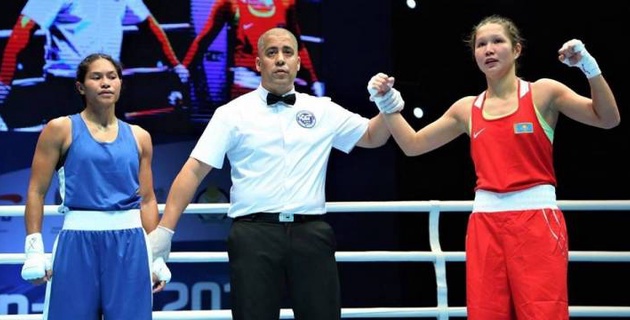 Milana Safronova, competing in the 64 kilogramme weight category, lost in the semi-finals to Italy’s Angela Carini. The fight had a very close call and the Kazakh team filed a complaint about the judgement.

“At the world cup in the semi-finals of the category up to 64 kilogrammes, Safronova had a wonderful competitive fight. The judges ruled in favour of the rival, but we thought the opposite. We sent a protest, which, unfortunately, did not affect the decision made earlier,” he noted.

Dina Islambekova, (over 81 kilogrammes), lost to China’s Xiaoli Young to take the bronze.

“In the over 81 kilogramme category, Dina Islambekova, who not so long ago moved from the junior level competition, delivered the result. At the world cup, she came in third and I think that this is a good result,” he added.

The team’s initial favourite, Nazym Kyzaybay, lost the first bout to Japan’s Namiki Tsukumi. As a result, she did not get any medal in the competition.

“In the weight up to 51 kilogrammes, Nazym Kyzaybay losing the first game was a disappointment for many. She will now throw all her energy into preparing for the (Olympic) licenses tournament. There is a lot of work ahead, including the selection,” said Algabek.