Courses on learning process from renowned US author, professor are available in Kazakh

By Zhanna Shayakhmetova  in Nation on 3 October 2019

NUR-SULTAN – More than 1,000 people in Almaty and the capital attended public lectures and participated in training on the way neurobiology is changing the learning process conducted last month by Oakland University Professor of Engineering and New York Times bestselling author Barbara Oakley. 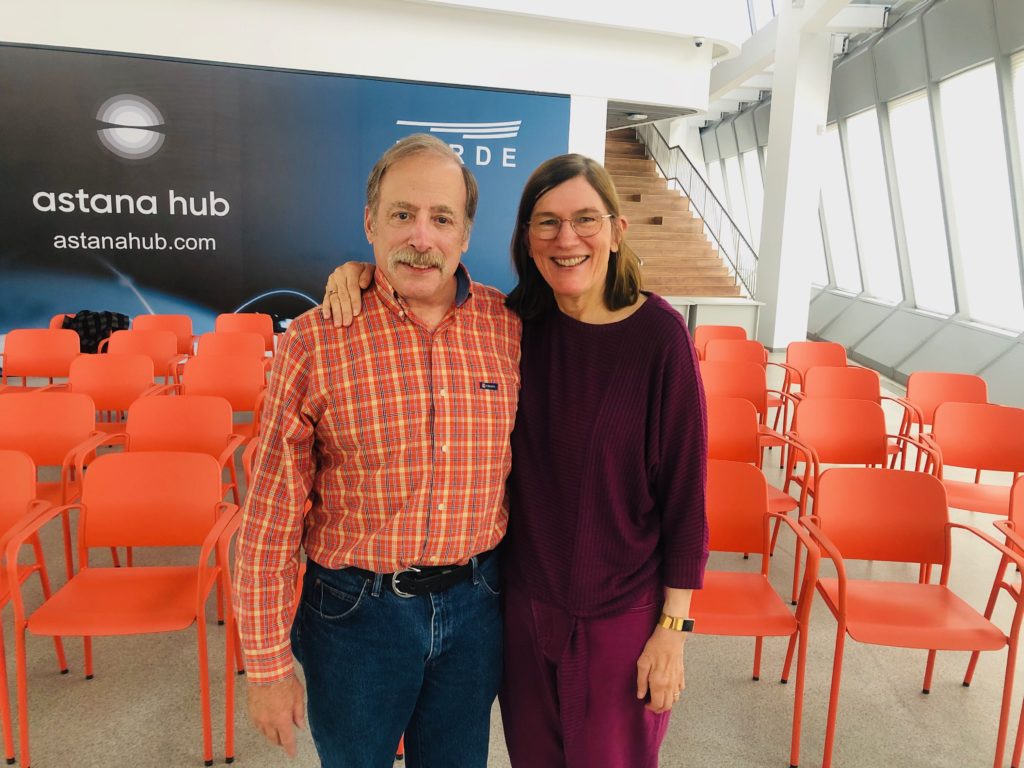 Philip and Barbara Oakley at the Astana Hub in Nur-Sultan on Sept. 29.

In a recent interview with The Astana Times, she spoke about her collaboration with Kazakh developers, why her course is in demand and how to deal with procrastination.

“Learning How to Learn,” created by Oakley and Salk Institute for Biological Studies Professor Terrence Sejnowski, is Coursera’s most popular offering. Approximately 1.8 million students from 200 countries have taken it.

Oakley became widely known in the country in May after her course was available for free in the Kazakh language on the udemy.com and academia.kz websites. Its translation was made possible through the cooperative efforts of the e-learning company Edgravity and the academia.kz pedagogical skills’ virtual laboratory.

The project began after Togzhan Kassenova, one of Edgravity founder Aigerim Khafizova’s former professors, introduced her to Oakley. They decided to adapt the course for the Kazakh audience.

Oakley noted working with the creative group in Kazakhstan was a rewarding experience.

“Their sets of videos are more creative – better acting, better in every way than the English version. I think it’s a tribute to how creative people are here. It’s been a pleasure and a treasure for me to work with the Kazakh team. They’re really educated. They have good hearts and they’re trying to help others. There’s just a societal love of people that [they] grow up with. It’s wonderful working with them because there’s also a deep sense of integrity and vision for the future. There’s excitement and enthusiasm here about the future,” she said.

She and her husband Philip enjoyed staying in both cities.

“The capital city also surprised us. The city is amazing, especially its architecture. I love the natural beauty of the country, but the people are just absolutely extraordinary,” she said.

Oakley immediately attracted the audience’s attention by noting she and her husband met while both were working at the South Pole Station in Antarctica. She joined in the U.S. Army after high school and received her first degree in Slavic Languages and Literature.

The question and answer sessions were the most exciting parts of the lectures. Participants asked questions related to the diet for cognitive health, how to relax while learning and how music affects the brain.

“People here are so creative that their questions are like paintballs,” noted Oakley. “The questions come from different directions and you can never predict where they’re going to come from. This means that people are not thinking in the same lines. Society here is more creative.”

She believes online education cannot replace classroom education, because universities will fight to prevent that from happening.

“Indeed, there is a place for universities. I think that face-to-face presence can help in some cases, but I do believe that learning is migrating towards online. For example, I know a professor who was such a great teacher that everyone loved his classes and they became so large that he was teaching 3,000 students in one class. They told him never take your class online, because you are too good in person. But he decided to experiment and put this class online and within two years, no one was taking his face-to-face class any more. Why? Because it’s so convenient to learn it online,” she said.

Oakley noted her course on memory techniques dealing with procrastination and effective practices to master difficult subjects through useful storytelling has received many positive reviews.

“People were surprised to know these insights, which they had never heard before. They are presented in a video that attracts attention. We start with the foundation of known science and then use metaphors and analogies to build on that and to help people understand these new ideas that they often have never heard before,” she said.

She admitted procrastination is a real challenge for nearly everyone and advised using the Pomodoro technique to train the brain. The strategy, developed by Francesco Cirillo, helps one work and break at set intervals. It recommends concentrating on work for 25 minutes by removing all distracting objects and thoughts, then taking a five-minute break to listen to one’s favourite song or drink a cup of tea. The technique “trains your ability to focus and reinforces that relaxing at the end is critical to the process of learning.”