By Yelena Levkovich in Nation on 18 October 2019 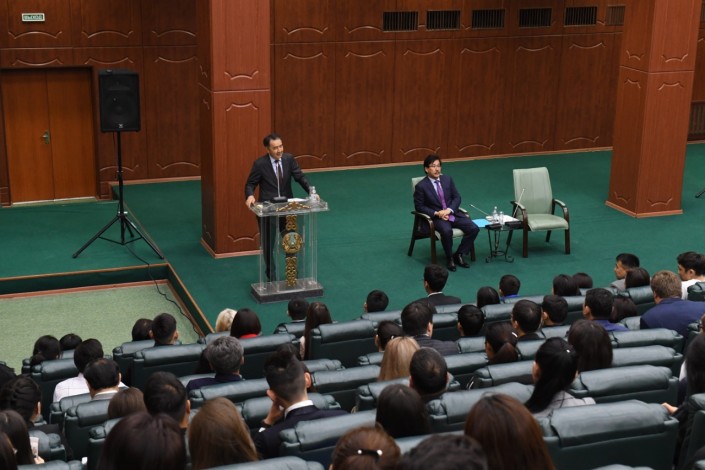 “On instructions of Elbasy (First President Nursultan Nazarbayev), we’ve already finished the long-term city strategy called Almaty 2050. I want to share my vision on our city development, counting on your participation and support,” he said.

The younger generation should be the epicentre of all the initiatives and the moving power following the change, he noted. City officials will be helped in realising their ideas by creating an appropriate innovative project ecosystem of youth entrepreneurship.

The first strategic priority is to convert the megapolis into a smart, global city. The bigger Almaty is expected to have a population of five million by 2030.

“Speaking about five million, we are considering only Almaty and its suburbs. Nowadays, three million people live in Big Almaty, so in 11 years there will be five million. The pressure on the local infrastructure due to population growth is the global challenge for all developing cities and we are not the exception,” he noted.

Almaty, similar to other global megacities, could risk an urbanisation crisis, he said. Sixty percent of its annual population growth is due to migration, which leads directly to a social, engineering and transport infrastructure reset.

To avoid such consequences, the city needs proactive planning and projecting, a smart approach to solutions within the entire Big Almaty agglomeration, said Sagintayev.

“City authorities consider that the optimal amount of Almaty inhabitants shouldn’t exceed 3.5 million. To keep it at this level after 2030, we ought to develop the city outskirts by creating jobs and social infrastructure and by loading mass public structure,” he added.

Speaking earlier at the Kazakhstan Growth Forum, Sagintayev noted “Almaty is the richest business city in Central Asia, the business capital with entrepreneurial initiative and private assets.” As the largest city in the country, it is home to 10 percent of the population and represents more than 20 percent of the GDP. Almaty generates 32 percent of state budget tax and non-tax revenues and approximately 15 percent of Kazakhstan’s external trade, he added.