NUR-SULTAN – Kazakhstan’s First President, Nursultan Nazarbayev, urged the national parliaments of Eurasia to be more involved in shaping their nations’ policies and in strengthening international cooperation during the opening session of the Sept. 23-24 Fourth Meeting of Speakers of the Eurasian Countries’ Parliaments. 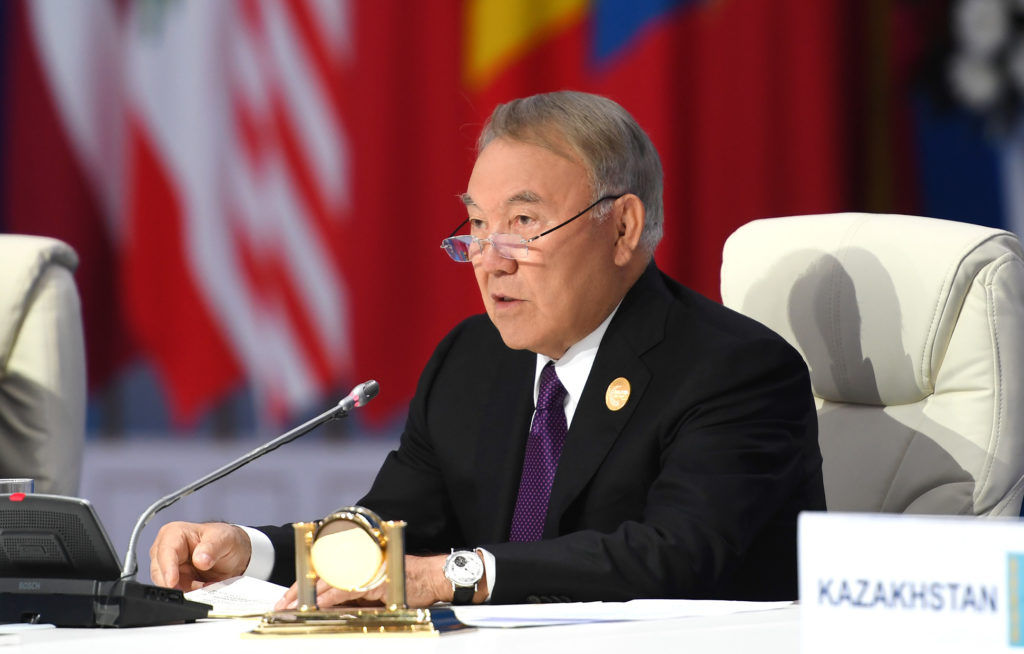 Parliamentary delegations from 65 countries, including 41 led by the speakers of parliaments, and heads of 14 international and interparliamentary organisations attended. 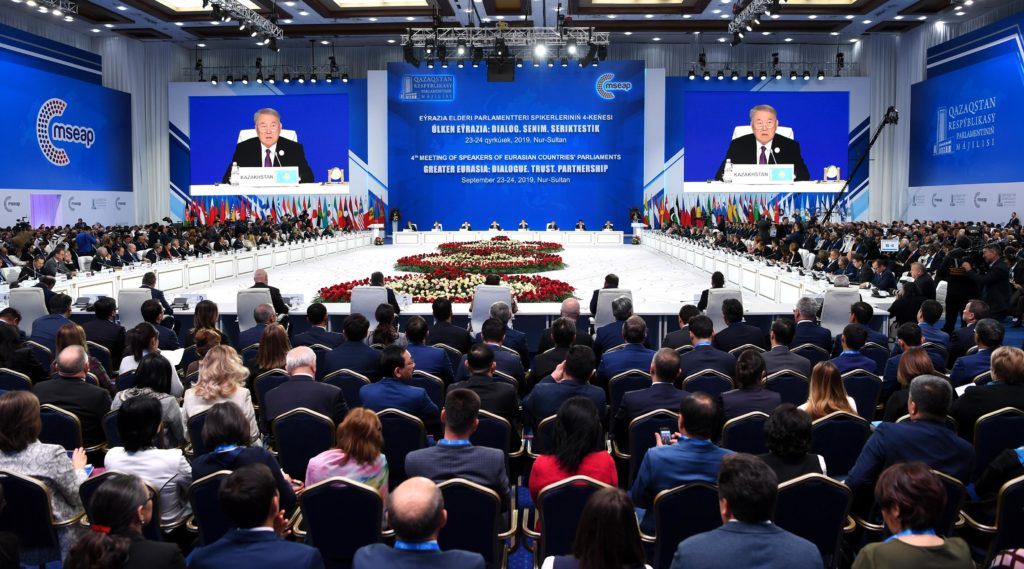 Kazakh Mazhilis (lower house of Parliament) Speaker Nurlan Nigmatulin said the forum was the largest of the four held so far. The number of participants has tripled since the first conference in Moscow in 2016.

“The meeting of speakers has become the most representative forum of parliamentarians in Europe and Asia. Nur-Sultan has really turned into the parliamentary capital of Eurasia,” Nigmatulin told the gathering, which was themed. “Greater Eurasia: Dialogue. Trust. Partnership.”

The event, he noted, is symbolic, as this year marks the 25th anniversary since Nazarbayev proposed the Eurasian integration initiative in 1994 in Moscow. 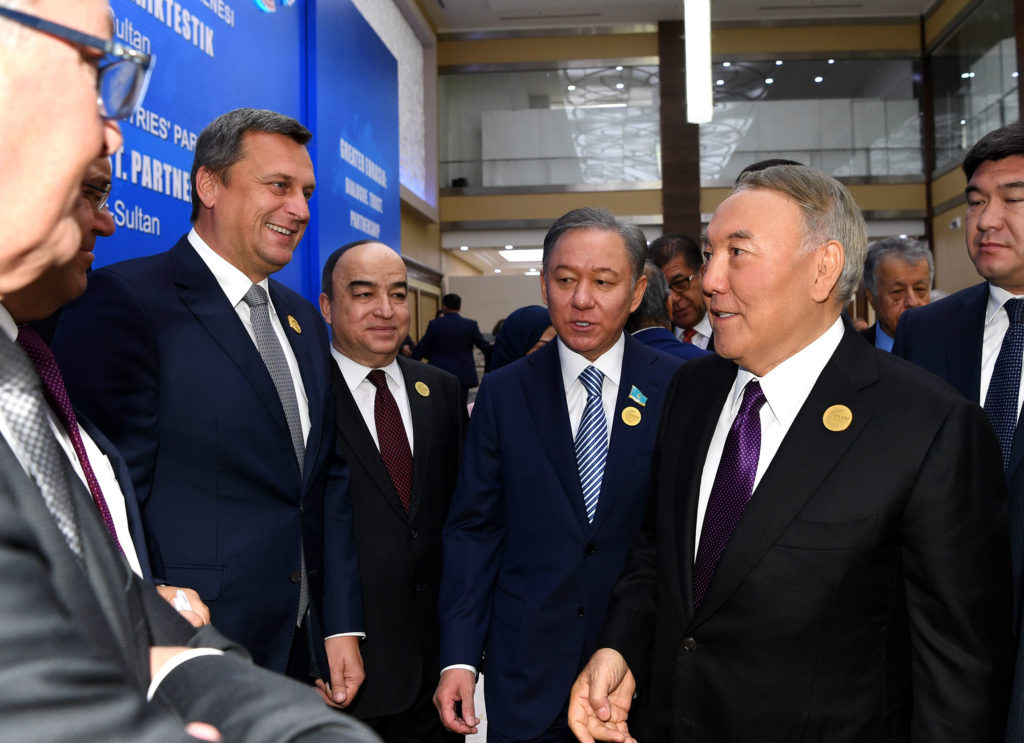 Eurasia is the world’s largest continent. It is home to 65 percent of the world’s population and accounts for 75 percent of energy resources and 40 percent of global gross domestic product. The success of integration in Eurasia depends on legislative support for the integration process.

Nazarbayev emphasised the important role of parliamentarians in enhancing cooperation between Europe and Asia and in overcoming the “crisis of international law.”

“We are all witnessing a crisis in the system of international law, more often its erosion, ignorance, blurring or violation. We are aware of the cases, when the sovereignty, territorial integrity of the states was violated and all previously agreed agreements were broken. The arbitrary use of sanctions has a negative effect not only on the countries that these sanctions target, but all other countries and the well-being of millions of ordinary people across the world,” said Nazarbayev.

Parliamentarians, said Nazarbayev, should be more involved in political and policy decisions, including the ratification of prominent international agreements, including the Paris Climate Agreement and the Comprehensive Nuclear Test Ban Treaty.

“Understanding the depth and acuteness of global trust between world powers, who else rather than people elected by fellow citizens could contribute to overcoming this,” he said.

The Eurasian parliaments, he noted, should also strive for greater cooperation in their legislative activities.

“We need to consolidate the interparliamentary community and boost the efficiency of joint efforts in legislative framework. The large amount of work has to deal with harmonisation of the legal acts,” he said.

Legislation should also be unified in fight against crime. Nazarbayev urged the formation of a common definition for terrorism as well as the creation of a single list of terrorists, extremist organisations and international organised criminal groups in the Eurasian region.

Regulations should also be tightened for online drug sales.

“We also expect the work in developing the legal base to transition the global economy in a new digital era – the era of artificial intelligence,” said Nazarbayev.

Eurasian countries, he noted, should avoid politicising international parliamentarism by excluding particular countries from the dialogue.

“In these conditions, speaking at the United Nations General Assembly in New York, I proposed convening an international high-level UN conference to reaffirm the basic principles of international law. Eurasian parliamentarians could add their contribution in this area by initiating a high-level legislative debate to revive the central role of the UN charter,” he added.

Nazarbayev proposed Nur-Sultan host in 2020 the informal meeting of the parliaments of the European Union, China, Russia and the United States.

“The confrontation between these countries concerns the entire world. These counties are those who stood behind the creation of the League of Nations and the United Nations. I believe they recognise their special responsibility for the future of humanity,” said Nazarbayev.

Bringing the European Union, Russia, China and the United States together is part of Nazarbayev’s idea to boost global dialogue and economic and security cooperation in what he defined as the “Three D” dialogue.

Nazarbayev also voiced the idea during the UN General Assembly in 2015 and in April during the Belt and Road Initiative Forum in Beijing.

Countries represent the first dialogue, which is a global one, followed by the second dialogue at the level of Eurasia to garner the efforts of CICA and the OSCE. The third dialogue would be in the form of a system-wide economic dialogue between the Eurasian Economic Union, the European Union, the Shanghai Cooperation Organisation and the Association of Southeast Asian Nations.