NUR-SULTAN – Kazakhstan’s Olympic cycling champion and Astana Pro Team General Manager Alexander Vinokurov won the Ironman 70.3 World Championship in the 45-49-year division in Nice. The triathlon competition was held Sept. 7-8 on the French Riviera, bringing nearly 6,000 athletes from all corners of the globe. 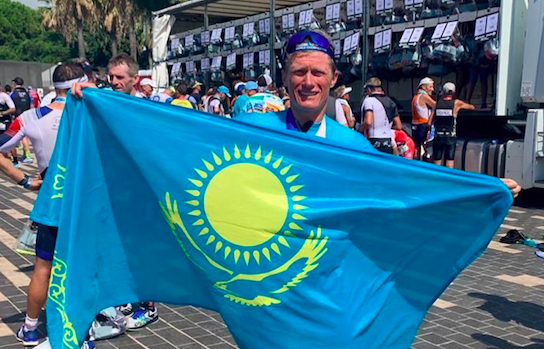 The athletes tackled the 1.9-kilometre swim in the Mediterranean Sea, a challenging 91.3-kilometre bike course that included multiple passes and head-to-head racing and a 21.1-kilometre run along the city’s historic Promenade des Anglais waterfront.

Vinokurov’s first-place finish surpassed 507 athletes in the category. In the overall ranking, he was 92nd of nearly 3,500 male athletes registered for the event.

It was “the victory for the entire Kazakh triathlon,” he said following his win.

More than 200,000 athletes aged 18-80 competed in more than 100 Ironman 70.3 events worldwide to qualify for the world championship. Vinokurov won the BI Ironman 70.3 competition in July in the capital.

He is now preparing to compete in the 140.6-mile (226.2 kilometre) Ironman World Championship long course race slated for Oct. 12 in Kailua-Kona, Hawaii. Organised in Kona since 1978, it is one of the world’s most physically and mentally demanding one-day sporting events.