Kazakhstan to launch compulsory health insurance 10 years in the making

By Elya Altynsarina in Nation on 20 September 2019

NUR-SULTAN – After almost a decade’s effort, Kazakhstan plans to launch in January 2020 a new system of compulsory insurance. The system is meant to lower the cost of healthcare and expand the number of Kazakhs who have access to healthcare through compulsory contributions by citizens and businesses to the national healthcare system. 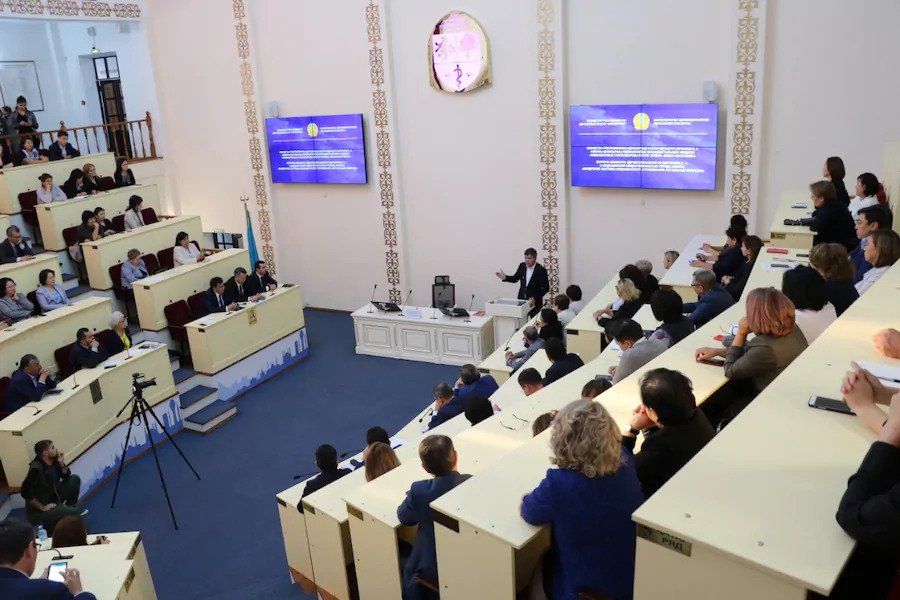 Government officials hope to launch the system nationwide after it is refined in pilot format being tried now in the Karaganda Region.

The roundtable “Market of medical services in Kazakhstan: transition to insurance healthcare” was co-hosted by Expert Kazakhstan business magazine and Kazakhstan’s Association of taxpayers.

Minister of Healthcare of Kazakhstan Yelzhan Birtanov and Chairman of the Board of Directors of the Fund for Social and Medical Insurance Aibatyr Zhumagulov were the main speakers at the event. 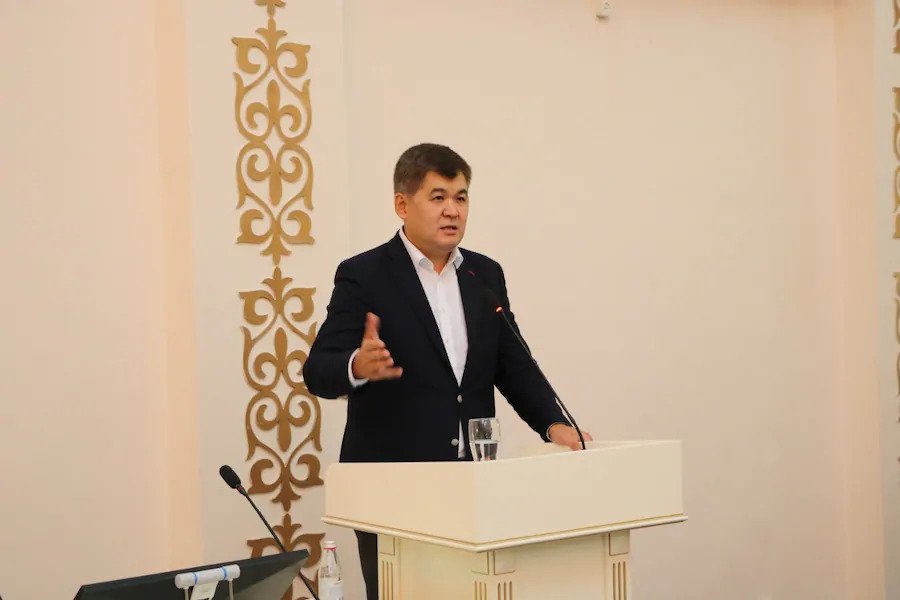 According to ministry officials, the insurance model chosen by Kazakhstan reflects the country’s social, economic and demographic situation. The Compulsory Social and Medical Insurance (CSMI) programme is less expensive and carries fewer political risks than private insurance, they believe. Contributions to the Fund for Social and Medical Insurance (FSMI) are made by companies and citizens, where companies make bigger contributions to compensate for relatively low incomes.

The government has been working on the transition for almost a decade. A law on it was adopted five years ago. Then, the state amended legislation, established the FSMI, made a pool of private and public service providers, listed the services and prepared a procurement and quality control systems.

The next step is Jan. 1, 2020, when Kazakhstan’s healthcare will shift to CSMI, “perhaps the nation’s most serious step in 20 years not only for introducing a financial burden to employers and residents, but for expected changes in the provision of medical services,” states a special issue of Expert Kazakhstan.

It notes that in CSMI, public and private clinics compete for patients on relatively equal terms with a single purchaser of medical services who is also the controller of the service quality.

To a question about the difference of the new model from a previous policy attempt in 1996-1998, Birtanov said the old version, heavily criticised, had its advantages and left behind a sound network of healthcare facilities and made medical care available to the entire population. Considering the safety of funds under the new system, the minister said the resources accumulated over two years are kept by the National Bank before starting to pay the bills in January 2020. Previously, the transition was postponed from 2018 to 2020.

The regulator, the Ministry of Healthcare, says now the policy offers a three-tier model with guaranteed medical care covered by the state, an additional package of CSMI and voluntary medical insurance not covered by the guaranteed package, with stages to be launched step-by-step.

It is expected that the insurance policy will impact the financing of healthcare as it was announced that the main goal of introducing healthcare insurance in Kazakhstan is to reduce “pocket expenses” of the population from 42 percent  to 30 percent and minimise the financial risks of citizens in the event of a sudden and urgent need for high-tech and expensive treatment.

“The share of healthcare expenses paid from the population’s own funds showed a steady growth trend… increasing to 45 percent,” the World Bank reported in a country review.

The ministry agrees with that fact. “If we talk about total health expenditures, which include the private cost of the population for medical services, in 2017 it amounted to 1.8 trillion tenge (US$4.7 billion). The share of expenditures as a percentage of GDP amounted to 3.1 percent, increasing from 2.7 percent in 2010,” said Birtanov.

“Unfortunately, we admit private expenses make 40 percent – a lion’s share of the financial pie. And this figure is twice the acceptable level recommended by the World Health Organisation,” said Birtanov.

Signs of underfunded healthcare could be seen in the share of its expenditures in the national budget of Kazakhstan. That share fell from 12.4 percent in 2010 to 9 percent in 2017.

An increase in social spending in 2018 to 2019 further decreased healthcare’s share of the budget.

“Within five years, we have to bring spending on education, science and healthcare from all sources to 10 percent of GDP,” said Kazakhstan’s First President, Nursultan Nazarbayev, in his address Oct. 5, 2018. “Financing should focus on reforms to make a significant improvement in the quality of public services.”

According to those who crafted the CSMI, the government considers CSMI a tool to address the ever-growing demand for increased financing for medicine and its systemic underfunding. In 2009-2014, budget expenditures on healthcare grew 1.9 times with total expenses growing 2.1 times. Government officials have said those numbers show the difficulty of the state financing medical care alone, without the participation of businesses and the population.

Therefore, the model described in the Law on Compulsory Social Health Insurance adopted November 2015, stands on the principle of joint responsibility of the state, employers and taxpayers. The FSMI accumulates fees, plans cost and payment for services, keeps consumer and medical organisations’ records and monitors service quality.

The increased funding will impact the wages of medical workers. Today, the average salary in this field is 5 percent lower than for other jobs. “We have to understand that the biggest problem for us now is the lack of staff, we should try at least not to worsen it,” the minister said.

The innovation of the new policy is in the compulsory collection of premiums from both employers and citizens. Before 2020, only employers and entrepreneurs would make contributions, which was 1.5 percent of one’s salary. In 2021, contract workers will pay 1 percent and in 2022, employers and workers are scheduled to pay 3 and 2 percent respectively. The state will contribute for 15 groups of the population, including pensioners, children, people with disabilities, unemployed, pregnant women who are unemployed and families raising disabled children, among other groups. In 2020, the state contribution will be 1.4 percent, in 2021, 1.6 percent and in 2022,1.8 percent.

The guaranteed volume of medical services is designed to not leave anyone out of the basic healthcare, such as primary and emergency care, and to treat non-communicable and transmittable diseases.

The state is also responsible for the most used types of assistance offered by the guaranteed volume of medical care: ambulance, primary, emergency care, as well as diagnostic, outpatient and inpatient care for a group of socially significant diseases, such as tuberculosis, hepatitis and AIDS/HIV.

The model seeks to solve the issue of the quality of medical services by enhancing the competition between private and public clinics. The FSMI now has a database of potential suppliers – about 1,400 medical organisations, not equally represented in every region, but an average city will see increased competition for a patient.

Competitiveness will prepare the country’s healthcare institutions for international markets. According to those who drafted the insurance programme, Kazakhstan’s clinics are already exporting dentistry, IVF and cardiac surgery services. In 2018, 2,000 foreigners came to Kazakhstan for medical services.

Ministry officials believe the reform will trigger investment in medicine.

“Private medicine is expecting from CSMI the raise in tariffs because that is the point of growth, considering the planned expenditures under CSMI,” says Birtanov.

But the key argument of the critics is that there is no sufficient solvent population to fund the model. Out of 18.5 million people, the government will have to pay for 11 million, mainly children and elderly people, growing in numbers due to high birth rate and increased life expectancy.

The agencies are continuing to update the status of citizens and introduce initiatives to cover everyone. “Today, employment significantly grew, more than 6.5 million people work, paying monthly 53 billion tenge (US$137 million) to the pension fund and 23 billion (US$59.4 million) to the Social Insurance Fund, while the state is committed to pay for the economically disadvantaged population,” says Birtanov. “For someone with a salary of 200,000 tenge (US$516.82), a monthly fee would be 2000-4000 tenge (US$5.17-US$10.34) to ensure against financial risks in the event of a serious illness.”

Launching the compulsory health insurance programme in pilot format in the in Karaganda Region is meant to allow stakeholders to refine the system before it is launched nationwide. Details of the programme, such as pricing, assigning patients to clinics and doctors and how to monitor quality still need to be worked out.

“The ministry is doing a lot on tariffs, but, unfortunately, prices for medicines and medical equipment are growing faster than tariffs. In three to five years the prices are expected to double. We want to see the investment component in tariffs, i.e., the coverage of capital costs. This step would make it possible to equalise the conditions for public and private providers, improve the management system, bring competition,” said Dyusenov.

Healthcare officials say they are aware of these issues and believe they will be addressed in the pilot format before the programme is launched nationwide.