NUR-SULTAN – Kazakhstan will develop its high-tech sector and elements of Industry 4.0 to increase the degree to which its economy is based on innovation and new technologies, Kazakh President Kassym-Jomart Tokayev said during the Sept. 11 sixth meeting of the Kazakhstan-China Business Council in Beijing. 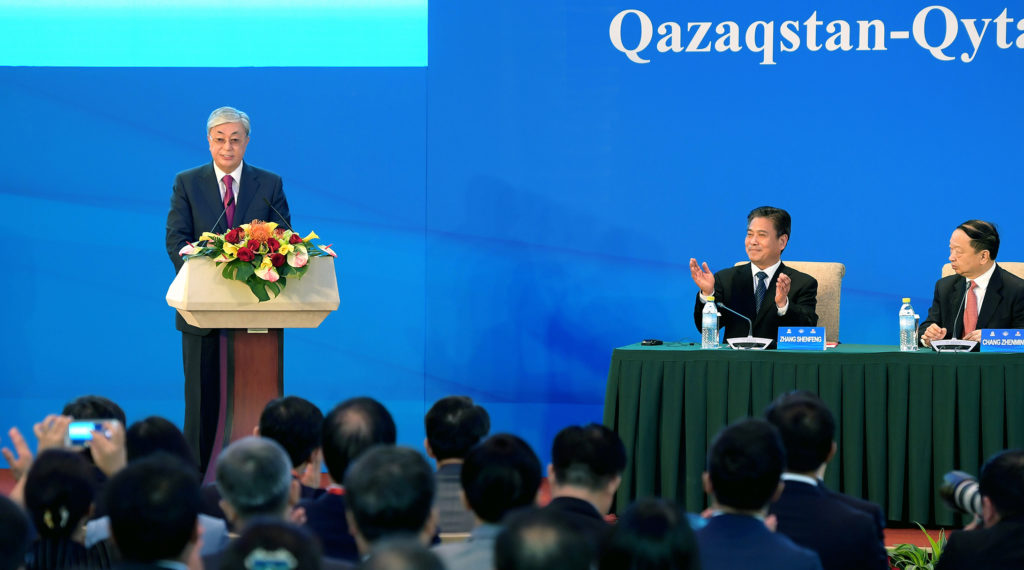 China has become a world leader in the new technologies and bilateral cooperation in this field is “of great importance for Kazakhstan,” said Tokayev.

“We are interested in creating joint innovative enterprises, technology parks and IT centres with Chinese companies. Our specialists study and develop Big Data, the Internet of Things, artificial intelligence, cloud technologies and supercomputers at the Astana Hub technology park. The simplified visa, labour and tax regimes are provided for participants,” he said.

Agriculture is also a promising area of bilateral cooperation. Kazakhstan is one of the top 10 wheat-exporting countries and 2018 wheat exports to China reached 550,000 tonnes.

“We can increase these volumes 3.5 times to two million tonnes. We increased export deliveries of salt to international markets. We can export up to 100,000 tonnes of salt per year to China. We are ready to export dairy products, poultry, beef, lamb, pork, flour, cereals, legumes, and oilseeds to the Chinese market. We plan to increase the production and export of organic food to China,” the President said.

He also noted China is one of Kazakhstan’s largest foreign trade and economic partners. Bilateral trade growth grew 11.4 percent to $12 billion in 2018.

“China has invested about $20 billion in Kazakhstan over the years of independence. The sixth meeting of the Business Council is an opportunity to expand the business and investment partnership of the two countries,” said Tokayev.

“Kazakhstan entered the top 30 countries among 190 countries according to the World Bank’s Doing Business ranking. It is ranked 28th. More than $300 billion of foreign direct investment (FDI) was attracted to Kazakhstan’s economy during the years of independence. Our country leads in FDI investments in the Central Asian region,” he said.

The President said the Astana International Financial Centre (AIFC) has 250 registered companies and is open to Chinese businesses. Officials expect to soon authorise investments in yuan at the AIFC to facilitate bilateral financial sector growth.

“The RMB Connect project will enable investments in yuan. I believe that the new ecosystem will make a significant contribution to the spread of the Chinese yuan in the world and will become a new settlement and clearing centre for the Kazakh enterprises and the region for operations in yuan,” said Tokayev.

He also said Kazakhstan offers opportunities to develop the transit corridor between Asia and Europe.

Five railway routes and six international highways pass through Kazakhstan, connecting China and other Asian countries with Europe and the Middle East. This allows goods to be delivered to Europe from China through Kazakhstan, or in the reverse order, in 15 days.

The Nurly Zhol state infrastructure development programme and the Belt and Road Initiative can also contribute to the revival of the Silk Road, said Tokayev.

He also said at a business roundtable during his visit that friendly relations between Kazakhstan’s First President, Nursultan Nazarbayev, and Chinese President Xi Jinping have helped build strong bilateral ties.

The President also said Kazakh-Chinese economic cooperation can be increased and spoke of the challenges faced by businesses in both countries.

Kazakhstan, said Tokayev, has the tourism infrastructure to attract Chinese tourists and called on the Chinese business community to create tourist centres in Kazakhstan.

The representatives of major Chinese companies, including Lu Yimin, CEO of China General Technology Group Holding, Ning Yun, Vice-President of the Export-Import Bank of China, Zhang Shili, Chairman of the Board of the China-Eurasian Economic Cooperation Fund, Yong Qing Wang, Chairman of the Supervisory Board of China Construction Bank, Luang Zhicheng, Vice-President of COFCO Group, Jin An, Chairman of Anhui Jianghuai Automobile Group, and other business executives attended the Kazakhstan-China Business Council.

In their meeting, Tokayev congratulated Jack Ma, co-founder and former executive chair of Alibaba Group, on the 70th anniversary of China and the 20th anniversary of the founding of the company. Tokayev said business contacts are important to the strategic partnership of the countries.

“I appreciate your desire to support Kazakhstan. We have a strategic agreement on cooperation between China and Kazakhstan in the field of the digital economy and we are interested in your participation,” Tokayev said at the Sept. 12 meeting.

Ma said he had been to Kazakhstan several times and was impressed by the culture and people. He said he’s going to share his experience with Kazakh business people.

Executive Chairman and CEO of Alibaba Group Zhang Yun also spoke about the company’s history, activities and traditions and shared the plans and new trends in e-commerce.