By Zhanna Shayakhmetova  in International on 26 September 2019

NUR-SULTAN – Kazakh President Kassym-Jomart Tokayev reaffirmed his country’s commitment to seeking a nuclear-weapons-free world in his address to the Sept. 24 74th Session of the General Assembly of the United Nations in New York. 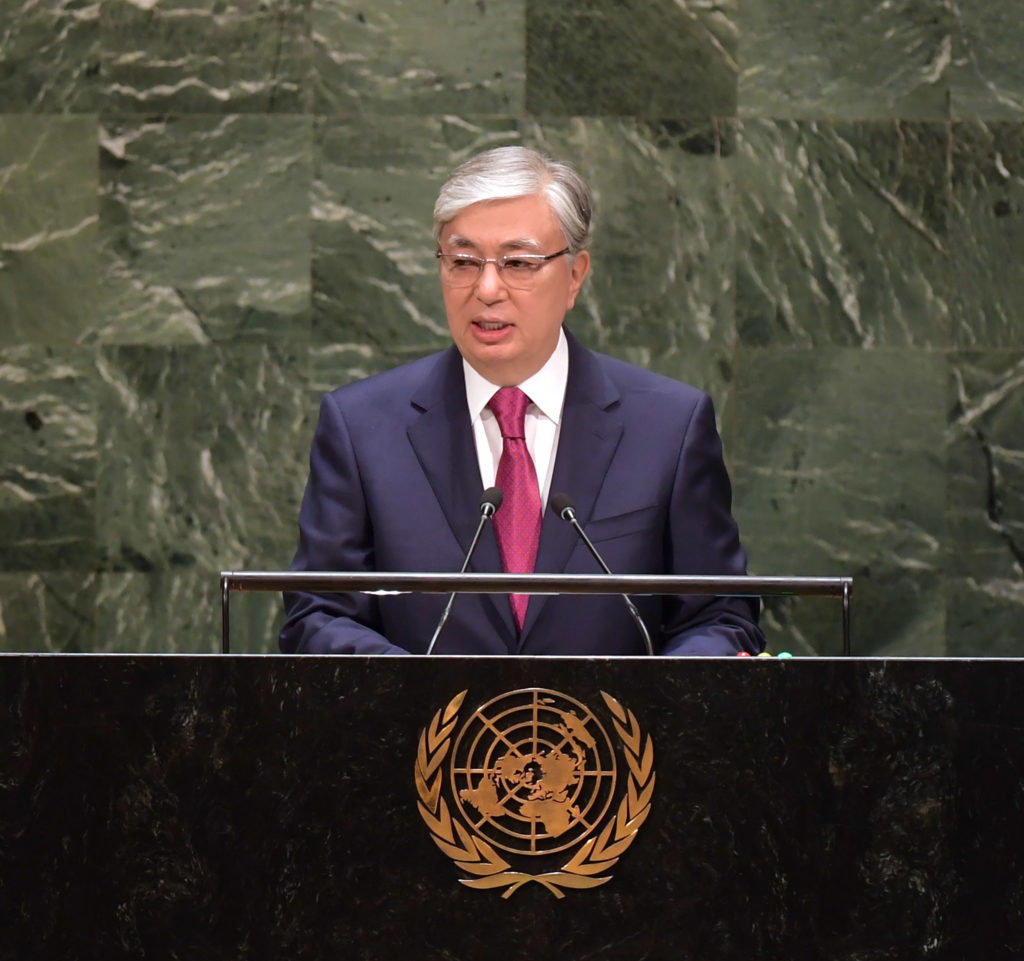 Tokayev, who delivered remarks for the first time as President, said nuclear disarmament has become “an essential part of the nationwide identity of the Kazakh people, giving us the moral right to be at the forefront of global movement to eliminate nuclear weapons.”

Kazakhstan and its First President, Nursultan Nazarbayev, shut down the Soviet-era Semipalatinsk Nuclear Test Site, he said.  Kazakhstan also helped establish the nuclear-weapon-free zone in Central Asia and it is the host of the International Atomic Energy Agency Low Enriched Uranium Bank. Kazakhstan has also put forward the UN General Assembly Resolution on the International Day against Nuclear Tests, adopted unanimously in 2009, and recently ratified the Treaty on Prohibition of Nuclear Weapons.

“We all should stand resolutely for the Universal Declaration on the Achievement of a Nuclear-Weapon-Free World as our roadmap to a safer future. We also aim for enhanced cooperation among nuclear-weapons-free zones and the creation of new ones. Kazakhstan believes that the current issues on Iran’s Joint Comprehensive Plan of Action and denuclearisation of the Korean Peninsula should be settled only by political means, with due respect to each other’s interests and concerns,” he said.

Tokayev said the UN as a universal organisation plays an important role in ensuring global development and interlinkage of civilisations.

“Kazakhstan fully supports the idea of the UN Secretary General António Guterres to not ignore and to acknowledge as our common heritage the fate of each person and each state. However, we have every reason to be concerned over the geopolitical and geoeconomical changes of the present age. This situation clearly should be a complex test for joint actions to implement the 2030 agenda,” he said.

The UN’s 75th anniversary in 2020 will give “a new impetus to our joint endeavours in promoting comprehensive international cooperation to put an end to animosity, distrust and militancy.”

The nation firmly pursues a policy of inclusive and sustainable development, comprehensive dialogue and peaceful endeavours amid “alarming new global reality,” he stressed.

The world today faces challenges, including unresolved conflicts and tensions, the lack of trust among global and regional actors and social, economic and technological inequalities that lead to distorted markets. Environmental degradation is also considered one of the most destabilising factors globally. Many believe climate change will lead to desertification, melting of glaciers and subsequent depletion of drinking and irrigation water in Central Asia.

Kazakhstan’s role as mediator on the global and regional scale

It is proposed to transform the Conference on Interaction and Confidence-Building Measures in Asia (CICA) into a full-fledged regional organisation for security and development when Kazakhstan assumes the chairmanship of the group in 2020.

“Kazakhstan contributes to UN peacekeeping by co-deploying with our Indian partners a 120-strong unit to the UN Interim Force in Lebanon as well as by providing military observers. We are also proud that Kazakhstan has turned into a global centre for dialogue of religions and civilisations. Since 2003, our capital has been honoured to convene the triennial Congress of the Leaders of World and Traditional Religions supported by the UN,” he said.

Tokayev emphasised Kazakhstan “is ready to support bilateral and multilateral actions aimed at finding viable peace and confidence-building solutions” regarding the situation in the Middle East.

Kazakhstan proposes an inclusive dialogue as a solution as the country has provided a platform for inter-Syrian negotiations.

“Thanks to the Astana Process, which complements the Geneva talks, the cessation of hostilities has been reached. The de-escalation zones with conditions for a safe return of refugees have also been established. We all know that conflicts are devastating and give rise to terrorism and extremism. These can only be defeated by joint actions through a Global Anti-Terrorism Network under the auspices of the UN,” he said.

Tokayev called for other nations to join the Code of Conduct towards Achieving a World Free of Terrorism by the UN centenary in 2045.

“This year, Kazakhstan successfully accomplished a special humanitarian mission, ‘Zhusan’, in cooperation with our international partners. As a result, 595 Kazakh citizens trapped by terrorist propaganda, including 406 children, returned back home from the war zones in Syria. We are ready to share our experience with other countries and urge them to take similar actions,” he said.

Tokayev believes Central Asia is becoming a global stakeholder as the region has entered the next stage of its development. Political dialogue among Central Asian countries is necessary for trade, economic, investment and people-to-people interaction.

Kazakhstan is interested in “further strengthening mutually beneficial cooperation among all states.”

“The situation in Afghanistan has a direct impact on our region. We hope that the Afghan-owned and Afghan-led peace process, assisted by all key stakeholders, will produce a lasting peace and prosperity for this country. Kazakhstan will continue to support the Afghan people to rebuild their nation. Enduring global and regional partnerships, long-term investments and regional connectivity are vital to secure the peaceful future of this nation,” he added.

Tokayev’s vision on political situation in the country

Kazakhstan’s political structure is based on “a strong and visionary president, an influential parliament and an accountable government.”

Tokayev noted “this concept meets the basic needs of our nation and ensures its peaceful and sustainable future.”

“My ultimate goal is to ensure that millions of my fellow countrymen benefit from large-scale reforms and enjoy inclusive society, robust economy, high-quality education and advanced healthcare. Kazakhstan will not become a success story in its social-economic development unless profound political transformation is accomplished,” he said.

The National Council of Public Confidence was established to promote a dialogue and the exchange of views between government and society.

“My vision is based on the concept of ‘different opinions, but one nation.’ It is through dialogue that we should move forward. Big changes will affect all law enforcement agencies and the courts to uphold the rule of law in every sphere and everyday life of our citizens. Populism is about mediocre policy. I am not in a position of giving empty promises but pursuing concrete deeds,” he said.