NUR-SULTAN – The European Bank for Reconstruction and Development (EBRD), which has an extensive portfolio of 262 projects in Kazakhstan, has invested nearly $9.1 billion since the country’s independence in 1991. The bank now seeks to grow its assistance in banking sector reforms, said EBRD President Sir Suma Chakrabarti in a recent interview with a group of journalists in the capital. 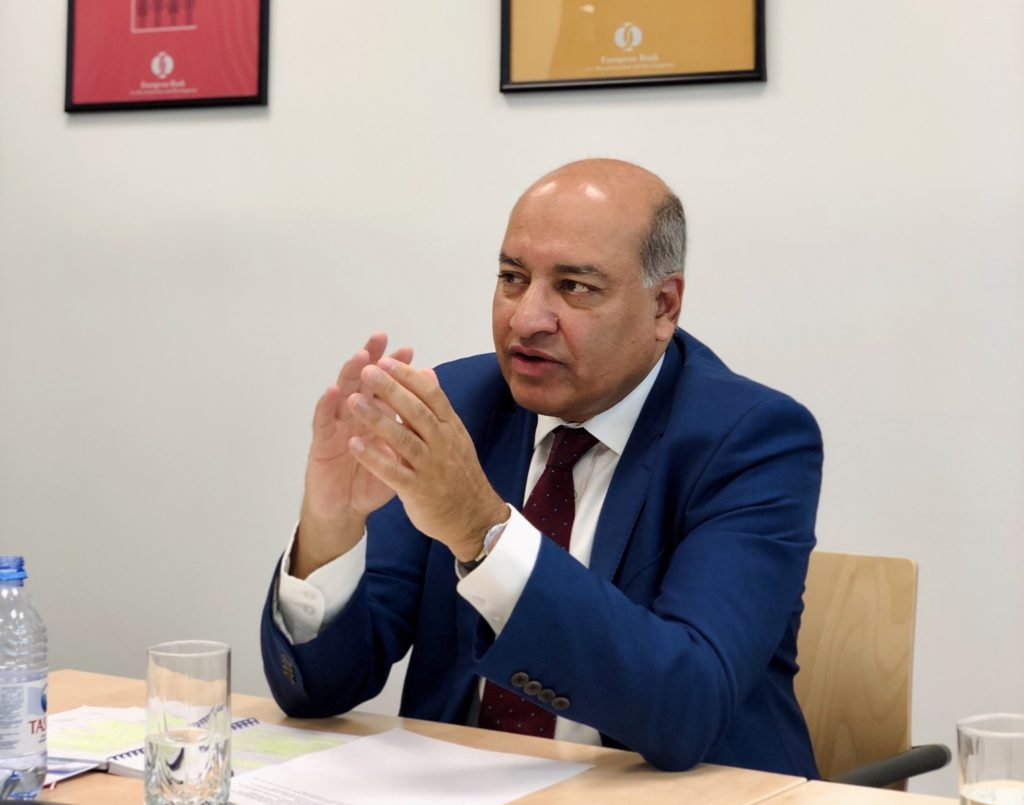 “I think huge reforms are required in the banking sector. This is crucial, because in any modern developing economy, the banking sector is fundamentally channelling people’s savings to high quality investments. So, banking has to be really efficient in doing that and there is a lot of room for improvement in Kazakhstan in that regard. This is quite natural in many emerging markets. We think we can help with that, with the reform, but also investment in the banking sector going forward,” he said.

In considering providing assistance for the country’s banking sector reforms, EBRD will need a complete picture of banks’ asset quality and capital adequacy.

“We would like to see more consolidation in the banking sector; we would like to see some of the integrity concerns that have been well-known slowly being cleared up. But the key action is an asset quality review this year,” he said.

The National Bank of Kazakhstan started a review Aug. 1 of the country’s 14 banks, which make up 87 percent of its banking sector, and plans to finish the work by December.

“What we promised is that we would send one of our managing directors, the one who leads on banking sector, to Kazakhstan and then we will take his conclusions. We will then track the asset quality review for the rest of the year and we will make some decisions in early January next year about what sort of investments would be appropriate,” said Chakrabarti.

He noted EBRD invests in the banking sector in two ways.

“One is we often provide, particularly, debt finance to help a bank move in a right direction; not just a credit line, but also technical assistance to improve the capability of the bank itself. The other area is that we sometimes take the equity in the bank before privatisation. Right now, we are doing something like that in Belarus prior to privatisation as well,” he said.

He noted the significant achievements Kazakhstan has made since 1991 and said further reforms are needed.

“One of the fundamental issues is that the country has been modernising and transforming very fast in the last 25 years; it is also true that many people have felt left out of that transformation. That is very common in economic history if you look at other countries. Inequality tends to increase in the initial period of modernisation. Jobs have to be created first of all, good quality jobs,” he said.

The country needs to make another push on privatisation and develop public and private partnerships (PPP), he added.

Chakrabarti commended Kazakhstan’s large-scale privatisation programme and noted KazAtomProm’s initial public offering in November found 15 percent of its shares listed on the London Stock Exchange and the Astana International Exchange (AIX). Listing Polymetal shares on the AIX has been “transformative.”

Kazakhstan also plans to float stocks of its biggest companies, including Air Astana, Kazakhtelecom and KazMunayGas. He noted the move will attract more strategic investors to the country.

Political economy decisions, he noted, are fundamental to determine how much should be privatised and public-private partnerships (PPPs) could also draw investors to the nation. Chakrabarti cited the Big Almaty Ring Road as an example of a PPP project of paramount importance not only for Kazakhstan, but also Central Asia.

The 66-kilometre road that encircles Almaty, the country’s largest city, will be completed in 2021. Turkish and South Korean investors have provided $387 million for the project.

“It will then pave the way for other new PPP deals in Kazakhstan. We have been thinking about Asfendiyarov Hospital in Almaty and also highways as well as a hospital in Karaganda. There are lots of ideas for PPPs and we are exploring them, but because the ring road is getting so much time to get to the starting line, it now needs to start; then, the other ones will be unlocked,” he said.

“The first six months of this year we have done three major solar projects; that is three of the ten we have done. That shows the momentum is increasing in this area and I am pretty sure there will be more of these projects to come in the coming year or two. I really think Kazakhstan will come as a regional leader in this area without a doubt,” he said.

ERBD provided a $51.3-million loan to the 100-MW Saran solar power plant, the largest solar project in Central Asia, adding to the $22 million Green Climate Fund (GCF) loan. It also supported constructing the Burnoye 1 and Burnoye 2 solar power plants in the Zhambyl Region. The projects are part of the EBRD and GCF renewable framework designed to increase investments in the sector and tap Kazakhstan’s renewable energy market.

Kazakhstan also ratified the Paris Climate Agreement in 2016 and committed to ensure a 15-percent reduction of greenhouse emissions by 2030 as its nationally determined contribution.

“That is how Kazakhstan became a leader amongst emerging markets at the Paris Climate Agreement. It was one of the first countries that said it would set a national determined contribution towards reducing carbon emissions and so during that space, we were the first bank to do solar project in Kazakhstan. The potential is huge here, because the weather conditions are such that we can invest very easily. But some of the things that happened that made renewables much more attractive are that prices have come down, so the technological advances everywhere mean the prices reduced,” he said.

“In the last 18 months, we have invested another billion dollars in another 43 projects, so there is big momentum going forward,” he said.

The EBRD will start preparing a new country strategy for 2021-2025 next year.