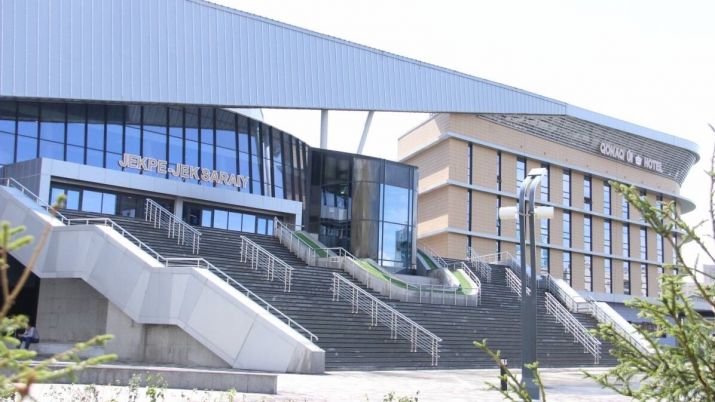 The 32,000-square-metre, $50.8 million centre will offer training facility for professional and amateur martial arts athletes. It has been built by the Samruk Kazyna Sovereign Wealth Fund and includes a gym, fitness centre, mini football pitch, 25-metre swimming pool and hotel throughout its four floors. It can hold up to 5,000 spectators and host competitions in boxing, judo, weightlifting and wrestling.

“The sports facility was built to meet the standards and requirements of international sports federations. Innovative engineering solutions were applied to the building to provide the most advanced energy-efficient heating, ventilation, air conditioning and lighting systems. The unique triangular shape of the Palace of Martial Arts symbolises the form of a flying eagle, a symbol of the freedom and strength of Kazakhstan,” said Samruk Kazyna Construction Director of Procurement and Operations Darkhan Mussanov.

The opening of the Palace of Martial Arts coincided with the Day of the Capital and a gala festival of martial arts that began May 7 in Shymkent. The festival was meant to promote a healthy lifestyle among youth and featured performances by martial artists from the Kazakh Martial Arts Association.

“Sport has become an important economic and social policy direction. A clear confirmation of my words is that the Palace of Martial Arts, built upon the instructions of (the First Kazakh President) Nursultan Nazarbayev, has opened its doors today,” said Kazakh Minister of Culture and Sport Aktoty Raimkulova at the opening ceremony.

“Today, sports facilities are working at an overload of 143 percent. The design and documentation are being developed for the construction of fitness centres in four residential areas of the city, including Koktal-2, Ilyinka, Ondiris and Zheleznodorozhny,” said the then Nur-Sultan Deputy Akim (Mayor) Yerlan Kanalimov in May on additional sports facility construction that will take place in 2019-2021.