Kazakhstan, UNESCO to establish ‘International Centre for Rapprochement of Cultures’

By Nazira Kozhanova in International on 1 July 2019

NUR-SULTAN – Kazakhstan and the United Nations signed an agreement June 25 in Paris to establish an international centre for the rapprochement of cultures in Almaty under UNESCO, reports primeminister.kz. 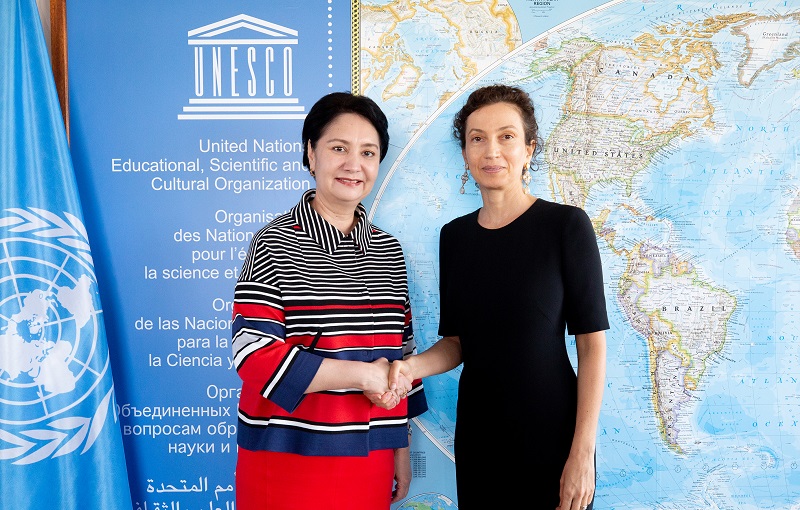 The centre will promote cultural studies and research in related fields, prepare publications and organise educational activities on the history and practice of intercultural interaction in Central Asia and other regions.

UNESCO General Director Audrey Azoulay, who signed the agreement along with Kazakh Deputy Prime Minister Gulshara Abdykalikova, thanked Kazakhstan for contributing to UNESCCO’s work and said the centre will facilitate intercultural dialogue on a global and regional scale.

Abdykalikova briefed Azoulay on the development of Turkestan city and other UNESCO-related projects and reaffirmed Kazakhstan’s commitment to UNESCO’s work. Abdykalikova said Kazakhstan takes into account the World Heritage Site status of the Mausoleum of Khoja Ahmed Yasawi and treats it in accordance with international standards for the protection of historical and cultural monuments.

The deputy prime minister also asked UNESCO to support a celebration marking the 175th anniversary of Kazakh poet and thinker Abai Kunanbayuly at the organisation’s headquarters next year.

Kazakhstan has been a member of UNESCO since May 22, 1992. The National Commission of Kazakhstan for UNESCO and Islamic Educational, Scientific and Cultural Organisation (ISESCO) coordinates the work with the organisation.

Currently, Kazakhstan has five UNESCO World Heritage sites, with three cultural and two nature sites. The cultural sites are the Mausoleum of Khoja Ahmed Yasawi (inscribed in 2003, considered to be the best-preserved Timurid Empire construction), Petroglyphs within the Archaeological Landscape of Tamgaly (2004, the site features 500 petroglyphs or rock carvings, which scientists date back to the latter half of the second millennium BC) and Silk Roads: the Routes Network of Chang’an-Tianshan Corridor (2014, includes 33 ancient and historical sites). The natural sites are Saryaka (2008, steppe and lakes of Northern Kazakhstan) and the Western Tien-Shan (2016, mountain range system).