By Aidana Yergaliyeva in Business on 16 July 2019

NUR-SULTAN – Kazakh President Kassym-Jomart Tokayev reviewed July 15 Kazakhstan’s 2019 socio-economic development efforts as he chaired the expanded session of the Government, the first under his presidency. He directed government agencies to increase incomes, create jobs, improve land use, and work on better investment climate, among other actions. 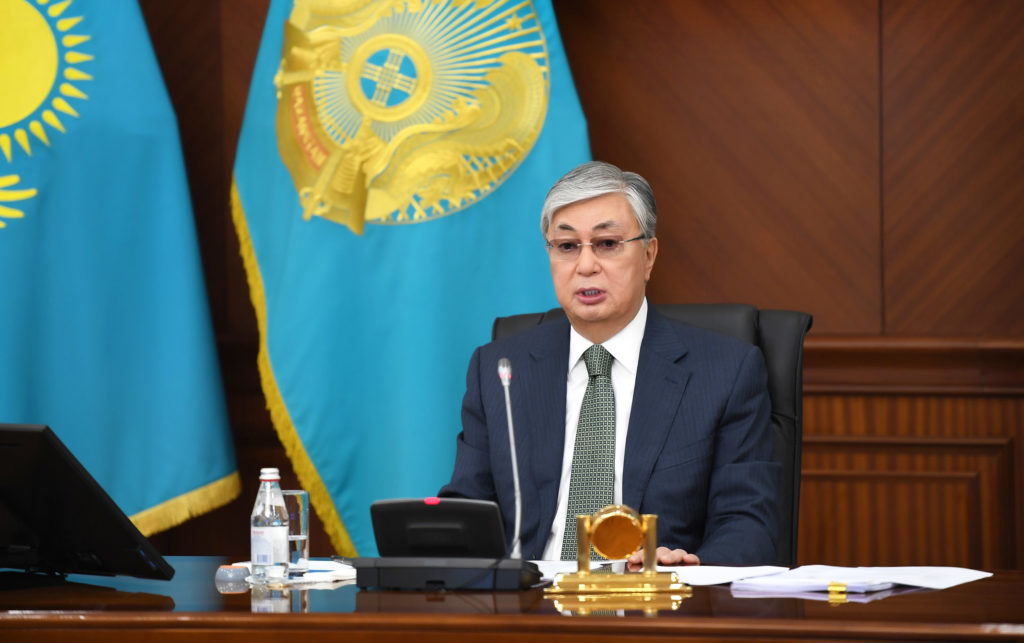 “Increasing the income of the population is our main job. (There is a) growth of 6 percent, but you cannot stop there. Sanctions, protectionism also influence the development of our country. International experts talk about the unstable situation in the world. Therefore, we should consider the creation of new jobs as a priority. During the years of industrialisation, more than 1,200 enterprises were commissioned, new jobs were created, new productions appeared, which were not there before. However, the external and internal competitiveness of Kazakhstan enterprises remains low,” Tokayev said.

Salaries in numerous sectors in Kazakhstan have increased since the beginning of the year, including a 30 percent increase for public sector workers.

The President also urged officials to move forward on his June 26 decree providing immediate debt relief to some of the country’s most vulnerable groups.

“This work should be kept under constant control by the government, the Administration of the President. We announced this action, and I repeat: this action is of a one-time nature,” said Tokayev. “But what we have announced to all the people must be completed on time and efficiently.”

The effort under the decree will be in two parts. The first is to verify the population segment that should receive the support. Kazakh National Bank and the Ministry of Labour and Social Protection will complete the work in July.

The second part is signing preliminary contracts between second-tier banks and microfinance organisations and the Problem Loan Fund. This work will start in late July and will be completed before the end of the month, according to Kazakh National Bank Chair Yerbolat Dossayev.

As for the situation in Arys, the state allocated the Turkestan Region funds to repair the town following the recent explosion at a nearby weapons depot which caused the evacuation of a town of 40,000. Tokayev demanded from the Ministry of Defence to complete the work on the transfer of military warehouses further away from the living areas as soon as possible. To avoid such incidents in the future, the President instructed the new specially established commission to strictly punish “all those guilty” in the incident by providing submissions to the Presidential Administration and the Security Council. These will include all those officials, including civil servants, who irresponsibly gave permission for construction in the immediate vicinity of high-risk facilities.

Tokayev also spoke of the need for reforms in public administration.

“We must understand that the world and, with it, our society have changed. Former approaches, tools rapidly lose their effectiveness. Reforms, new solutions to old problems are needed. In order to increase the efficiency of the state apparatus and restart its interaction with society, I instruct the Presidential Administration, together with the government, to develop a concept for the development of public administration. This is the most important issue. Therefore, next year we will consider its draft at a government meeting, and possibly at a meeting of the National Council,” he said.

“It is necessary to fully support the domestic business, the so-called national bourgeoisie. Those who hinder its development through unreasonable checks, extortion, raiding, must be severely punished. I believe it is finally time to criminalise the actions of state bodies and their representatives aimed at undermining business. To provide in the legislation strict measures up to criminal prosecution,” he said. 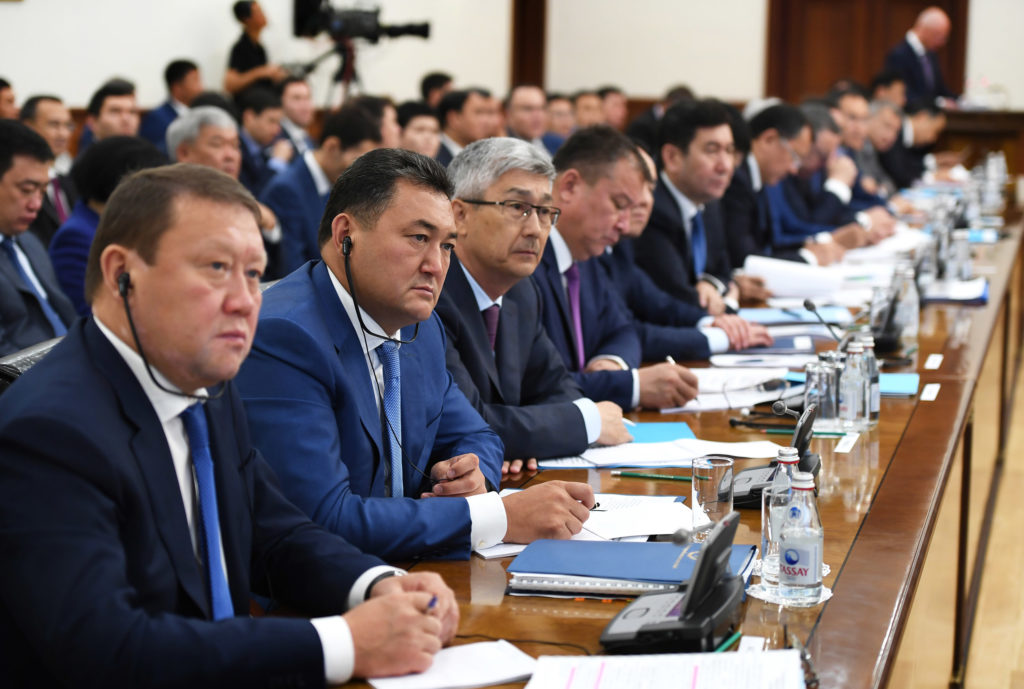 The President also called all administrative bodies to establish a feedback system with the population.

“In each central and local executive body there should be permanently functioning platforms for feedback with the population,” said Tokayev. “Particular attention should be paid to work with social networks; each public servant should be active in social networks on supervised issues. We have to restore the trust of citizens, convincing them with numbers, facts, actions, promptly reacting to criticism. Therefore, a transition to the concept of a state that listens is necessary.”

Tokayev criticised the work of akims (regional governors and city mayors) in attracting investors. According to him, akims behave “in a princely manner” in meetings with entrepreneurs and investors rather than keeping “an exclusively business relations”. He advised akims to read Lee Kuan Yew’s book “From Third World to First,” where he talks about his personal experience in attracting investors to Singapore.

“(Akims) sit at the head of the table, seat them [visitors] at a distance of two, three, four meters, behave like leaders of some principalities. As if you are not interested in attracting investments, but they are interested,” he said.

Tokayev also addressed a recent Ministry of Agriculture inventory of agricultural land that revealed 16.5 million hectares of unused land in the country. Tokayev instructed the government to conduct an audit of all agricultural land and to digitise the land registry system by the end of 2020.

“Land is the main factor of production. Without efficiency and transparency, we cannot develop our rural areas. We understand that this is a difficult job, here you need a harmonious interaction of the ministries of agriculture and digital development,” said the President.

Tokayev also instructed to strengthen the responsibility for the poor-quality and ineffective planning of projects funded with budget money such as the light rail transport’s (LRT’s) project in Nur-Sultan. 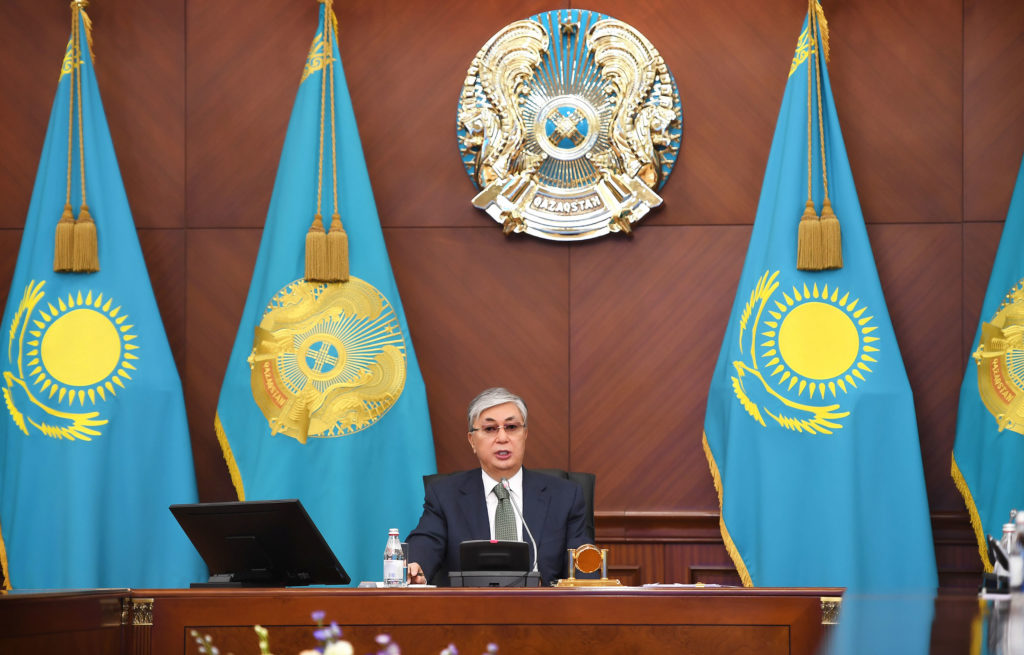 “Instead of creating a convenient, understandable, practical transport for the population, an expensive type of transport was proposed (by) LRT. The opinions of specialists, the architectural community, as I understand it, were not taken into account. According to the akimat, the projected flow will be 146,000 people per day. Predicted flow! Currently, along a similar route from the airport to the new station, passenger traffic is only 2,000 people daily. How are you going to increase passenger traffic 70 times? I do not understand,” Tokayev said.

These projects create a risk and “entail a constant receipt of subsidies and a burden on the state as a whole.”

From the beginning of 2019, there has been acceleration in economic growth from 2.9 percent to 4.1 percent, said Mamin. The main sources of economic growth have been industry, construction, transport, trade and agriculture. Investments in fixed assets have increased 11.7 percent.

“The main priority of our work is the creation of new jobs, attracting investment in fixed assets. By 2025, it is planned to increase the volume of investments by 20 percent annually in fixed assets and increase its level to 30 percent of the country’s GDP (gross domestic product),” said Mamin.

The Kazakh government plans to increase labour productivity at least 33 percent and increase non-oil exports to $38 billion by 2025.

In the agro-industrial complex, the government has plans to increase the production of high quality domestic products and reduce imports by two times. They will continue measures to increase export of agro industrial goods from $2.4 billion to $5 billion per year.

Mamin said, starting from 2020, corporate income tax from small and medium businesses will be transferred to the revenue base of local budgets.

“Therefore, regions that are actively attracting investment and developing entrepreneurship will receive additional taxes to local budgets,” he added.

The Kazakh labour market is expected to add 2.1 million citizens over the next five years, said Mamin, and thus, “creating jobs through investment is paramount for the government. Measures will be taken to systematically modernise the national labour market.”

He also said there is great potential for economic development in the service sector, in particular in tourism, e-commerce, transport and logistics. The new State Programme for the Development of Tourism by 2025 will attract 600 billion tenge (US$1.57 billion) in investment to the industry and create 200,000 jobs, including in related industries. The share of tourism in GDP is expected to grow to 8 percent by 2025.

The development of transport and logistics by increasing transit, trade and logistics capacities and improving local and national roads will create about 150,000 new jobs and increase the industry’s share to 10 percent of GDP, he said.